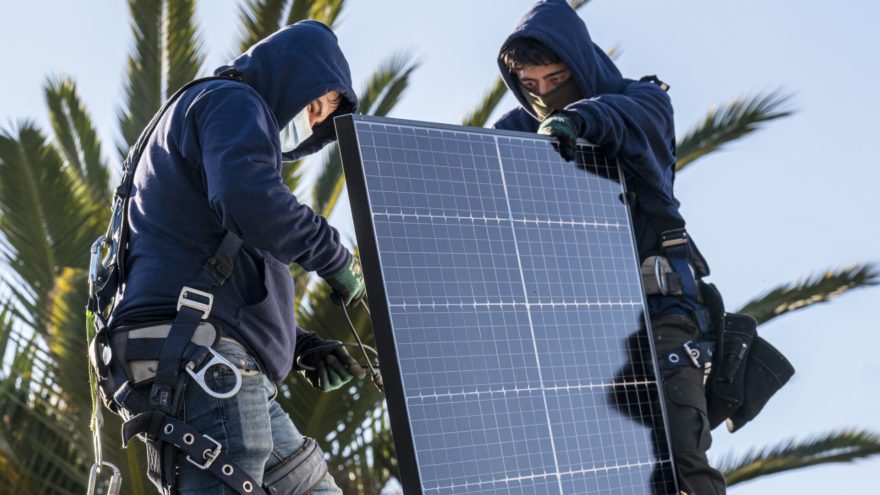 Contractors install SunRun solar panels on the roof of a home in San Jose, California, on Monday, Feb. 7, 2022.

CEO Badri Kothandaraman said Tuesday that the company is “tripling down on Europe in terms of spending.” The comments followed the company’s first-quarter earnings, which beat analyst expectations on the top and bottom line.

Here’s how Enphase did versus analysts’ expectations, as compiled by Refinitiv:

Enphase, which makes microinverters and backup energy storage for solar systems, reported record revenue during the period, with sales jumping 46% year over year. Enphase also gave optimistic guidance for the current period, saying it expects to earn between $490 million and $520 million. That’s ahead of the $475 million analysts surveyed by Refinitiv were expecting.

“We expect our momentum in Europe to continue with more than 40% sequential revenue growth expected in Q2 versus Q1,” Kothandaraman said on the company’s earnings call. “We are continuing to expand the team and are very excited about our growth in the region.”

The company has existing operations in Germany, France, Belgium and the Netherlands. New markets in Europe include Italy, Spain and Portugal.

Enphase has traditionally focused on the U.S., and during the first quarter the region accounted for 84% of the company’s revenue.

Kothandaraman said that supply chain issues — including parts shortages and rising freight prices — continue to ease. These headwinds have been felt across sectors as the economy rebounds from the pandemic.

“The situation regarding component availability is obviously much better than what it was last year…we have learned how to mitigate our risk,” he said. “I cannot predict what’s going to happen tomorrow, but I can say right now our situation is quite stable,” he added.

The company’s gross margin during the first quarter stood at 40.1%, up from 39.6% in the prior quarter. Enphase raised prices in 2022, after also hiking prices last fall, in an effort to combat rising raw material costs.

Policy uncertainty has also hurt the market performance of Enphase — and other solar companies.

In March, the Department of Commerce said it was launching an investigation that could result in tariffs on solar panel imports from Malaysia, Thailand, Vietnam and Cambodia. The four countries account for 80% of the United States’ panel imports.

The case was brought by California-based Auxin Solar, which claims that Chinese companies have avoided tariffs by shifting manufacturing to these other four countries.

Industry advocates, including the Solar Energy Industries Association, have said extending the tariffs would hurt the US solar buildout.

Kothandaraman echoed this point, saying the investigation creates “massive uncertainty” in the marketplace, and will lead to lost U.S. jobs, higher power prices for consumers, and more imports from China.

“We are hoping that the current administration takes this problem seriously and resolves it rapidly — well before the proposed August time frame,” he said. Kothandaraman added that the way to support domestic manufacturing is through tax incentives.

Beyond microinverters and batteries, Enphase is expanding into other categories in an effort to be a one-stop shop for energy management. The company will begin offering electric vehicle chargers through its solar installers and distributors this quarter. By the end of the year the company plans to begin manufacturing its own EV chargers.