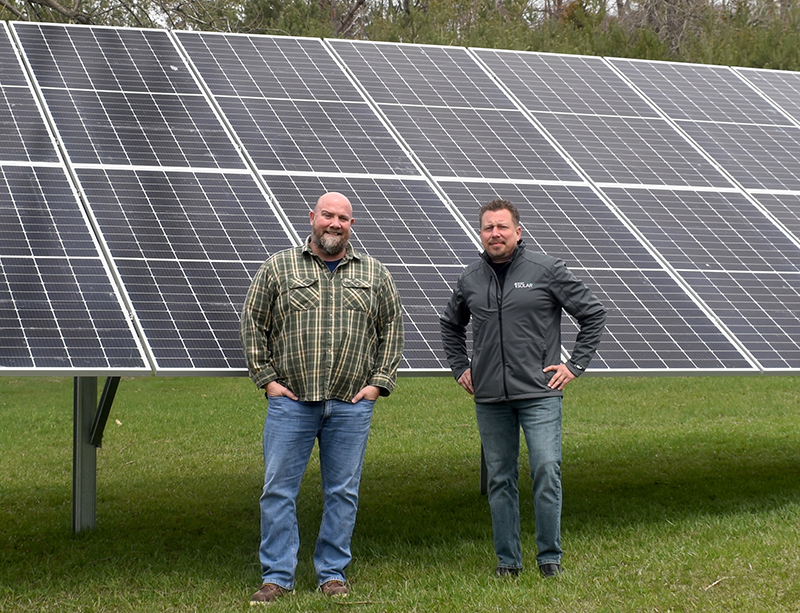 T-R PHOTO BY ROBERT MAHARRY
Marshall County Landfill Manager Don Ballalatak, left, and local 1 Source Solar Specialist Mike Dunn, right, stand in front of the new solar array outside of the landfill’s office. In all, three arrays have been constructed on the property, and they are expected to be fully operational within the next two to three weeks.

Visitors to the Marshall County Landfill will likely notice a few large, shiny new additions on the property the next time they come by, and before long, these solar arrays will be producing enough electricity to power the entire facility.

Don Ballalatak, the manager at the landfill, said Mike Dunn, a local representative with 1 Source Solar, an Ankeny-based company, first reached out to him back in November and asked if he had ever considered installing solar panels at the facility just west of Marshalltown. After the initial conversation, Dunn put a quote together, and Ballalatak took it to his executive board. A bit of “back and forth” ensued before the board eventually accepted 1 Source’s quote.

“We just kind of got the ball rolling from there,” Ballalatak said. “It’s kind of neat for us. We’re not really looking for any pats on the back or anything. But we’re the landfill. We try to do a lot of good environmental things, and it kind of made sense for us to make that step.”

With an investment of $60,000 — $25,000 of which was funded through an Iowa Department of Natural Resources (DNR) grant — the landfill has added a total of three arrays: one for the main office, one for the lagoon and one for the warehouse. Dunn said this is the first landfill project he has worked on as a solar specialist (and the company’s second), and he estimates it will be paid off in about eight years.

“Basically, what I want to do is go after 100 percent of their bill, completely offset it to get them saving as much as they can and not being affected by the natural rising cost of utilities that’s inevitably going to happen,” he said. “There’s no sign of it coming the other way.”

Dunn hopes the word will spread and convince more large businesses and government entities within Marshall County to consider solar energy with the landfill serving as a catalyst. Ballalatak agreed and said he would be happy to answer questions for anyone who might be curious.

“If we can help get the word out a little bit, that’d be a good thing,” Ballalatak said.

Construction on the array was completed about a week ago, and Dunn expects it will be turned on and fully operational within the next two to three weeks as they wait for Alliant Energy to give the green light.

“They’ll start saving right away, and once that sun starts shining, their bill offset will start slowly,” Dunn said. “The sun’s coming. It’s a lot better doing it now, especially versus March or November or something like that.”

With its cost saving potential and environmental benefits as a renewable energy source, Dunn sees a bright future for solar both locally and across the state.

“It’s just a rising thing. The future is pretty much solar. As things keep rising and inflation is out of control, it’s the only thing people are going to be looking forward to,” he said. “It’s projected to be one of the busiest solar seasons in Iowa.”

Today’s breaking news and more in your inbox