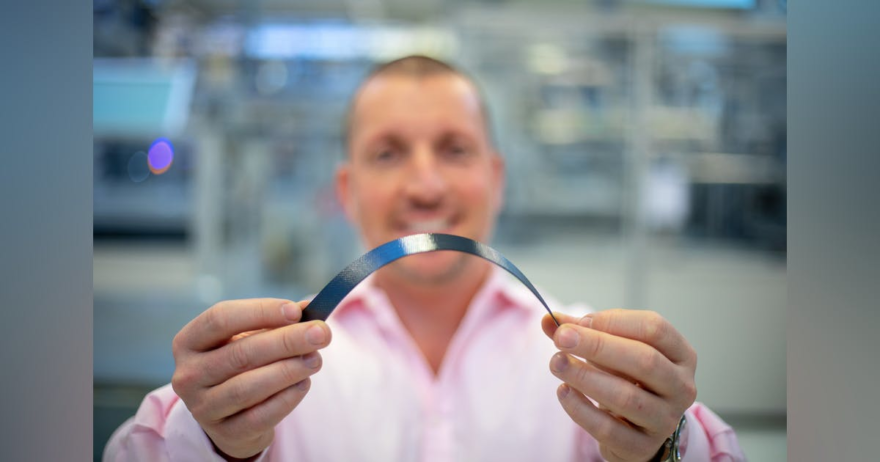 A wireless, continuous power source for charging devices is an enticing concept. But despite a surplus of examples of solar-powered prototypes, few manufacturers can boast of achieving commercial viability with their solar cell inventions.

Swedish solar technology company, Exeger, is garnering attention for inventing a thin, flexible dye-sensitized solar cell (DSC) that harvests electricity extremely efficiently, and can be custom-printed in almost any texture, shape or colour.

“We have done something crazy, really, because we have invented a new power source,” said Exeger’s founder and CEO, Giovanni Fili, who predicts that self-powered products will become a natural part of everyday life.

It’s a powerful claim, but Fili pointed out that there are less than a handful of commercial sources of solar technology after almost 90 years of research.

Exeger has been around for 13 years and already holds 175 approved patents. The company was awarded a patent for a new superconducting electrode material (Patent No. EP2625703) in 2018. Last year, Fili and Exeger’s CTO, Henrik Lindström, were honored with the European Inventor Award in the “SMEs” category.

A standard solar cell (also called a photovoltaic cell) converts the energy (light) into electricity. Conventionally, they are octagonal in shape and are blue or black in color, with silver lines crossing the surface. “The silver lines are there because when a photon (light) is converted into an electron current (the power we want), it has to be transported out to the cables, so you can use the power,” explained Fili.

The conductivity in silicon or other technologies is low due to high resistance and this limits its commercial viability. “In traditional solar cells, the silver lines collect the electrons and lead them out to the cables (current collectors), so we can use it,” he added.

In contrast, Exeger’s innovation, which is branded as Powerfoyle, is an electrode nanomaterial that offers up to 1,000 times better conductivity than other materials used in flexible solar cells. Inspired by the principles of photosynthesis, the proprietary material converts any light source (inside or outside) into electrical energy, noted Lindström, who holds a Ph.D. in batteries and DSC solar cells research from Sweden’s Uppsala University, and is the first scientist to produce a solar cell on a flexible plastic substrate.

The DSC consists of a porous conductive powder layer, which was formed, for example, by screen printing a conductive powder ink containing terpineol and titanium metal powder onto a porous glass-fiber substrate. Having the electrode located directly behind the light absorbing layer is a distinguishing design feature, as it allows more light to reach the cell and more electrical current to be generated.

Screen printing was identified as the preferred manufacturing method because it facilitated the deposition of a few micrometers and up to tens of micrometer thick layers to be coated onto a variety of substrates, such as rigid, flexible or porous substrates, according to the patent report. Screen printing also happens to be an old—yet stable and cost-efficient—method of printing that allows users to print in almost any shape or design with high levels of accuracy and speed, explained Fili.

Graphics can be printed on the conductive electrode material, and Fili said it comes in more than 100 patterns and textures (such as leather, textile, brushed steel or wood) that can be produced as large homogenous surfaces, without the silver lines. The cells can be designed as large as one square meter.

To boot, the company is conscientious about choosing materials in the cell, as well as in its production techniques. “We have zero emissions from the factory because of the choices we’ve made in terms of production and materials,” said Fili. “We could choose other materials and get even higher efficiencies, but those were poisonous or have very rare earth metals or have other problems. We don’t do that.”

Exeger has partnered with manufacturers to develop portable electronic products. The Powerfoyle technology has been integrated into the headband of the Urbanists Los Angeles self-charging headphone. “It charges under all light conditions—indoor, outdoor, shade and so on, and any normal user will not need to charge the headphones again,” said Fili. “You’re just using a clean form of energy in the form of ambient light.”

A smart bicycle helmet designed by POC integrates Exeger’s solar cells that capture natural and artificial light to power the helmet’s technology, such as a light at the base of the helmet. With no on/off switches and no charge ports, the technology increases safety, said Fili. “There’s a huge market for [Powerfoyle technology], as more than 420 million helmets are sold every year,” said Fili.

Powerfoyle has unexplored uses for industrial and infrastructure settings; the technology could be applicable in smart cities, for charging street lights, communication devices or even self-driving cars. In industrial settings, Fili envisions the use of Powerfoyle technology in powering such things as protective gear, sensors, monitors, signage and a range of IIoT applications—such as self-powered emergency buttons that could be activated during power failures or emergency shutdowns.

The main focus for Exeger in the near-term is consumer electronics products, with a push toward offering consulting services on new applications. Fili said the firm has created an integration toolbox, which includes guidelines on Powerfoyle’s dos and the don’ts, including instructions on whether one can glue, stitch or mold it.

“Our vision is to co create sustainable tech for the future, with the world’s best engineers,” said Fili. “They are, of course, already at the OEMs and ODMs (original design manufacturers).”

This vision is taking Exeger on a growth course to develop key partnerships for developing co-lab opportunities and to form an ecosystem around Powerfoyle. Dili said  team in Hong Kong holds knowledge about integration, hardware, software, mechanics, design and production, and its mission is to help OEMs and ODMs bring products to market.

Last year, Exeger reported a partnership with OSM Group, a full-service ODM, which assists with design, product development, scalable mass production and supply chain management solutions, as well as a partnership with Qualcomm. The latter will provide a ready-made solution with a power-efficient Bluetooth chipset paired with Powerfoyle for use in wireless headphones.