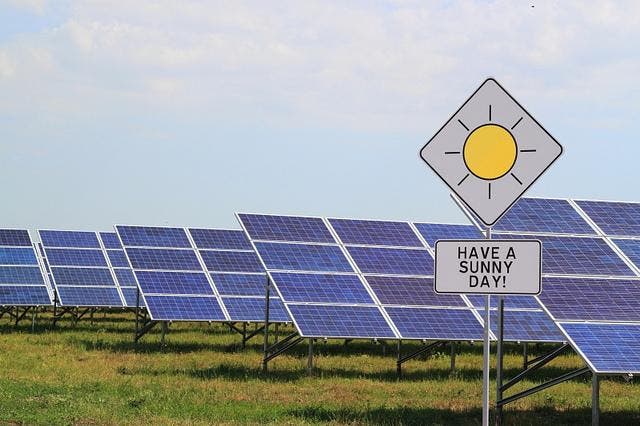 AleaSoft Energy Forecasting, April 11, 2022. In the first week of April, the photovoltaic energy broke records in the Spanish, French and Italian markets. This technology and the wind energy contributed to lower the prices of most European electricity markets. Negative values or the lowest in recent months were registered in several of them. Gas prices fell, also favouring the drop in electricity markets prices. Spanish electricity futures for the next quarter registered a rise of more than 30%.

For the week as a whole, the increase in production in the Italian market was 48% and in the French market 24%, compared to the previous week. In the German market, the increase in solar energy production was 11%, while in the Iberian Peninsula, where it includes the photovoltaic and solar thermal energy, it was 7.0%.

Similarly, in the first week of April, wind energy production increased in most of the markets analysed at AleaSoft Energy Forecasting compared to the previous week. The largest increase was registered in Germany and it was 119%. In the French market it also increased considerably, by 41%. In the case of the Iberian Peninsula, the increase was 4.8%, while in the Italian market the production with this technology fell by 3.0%.

For the second week of April, the AleaSoft Energy Forecasting’s forecasts indicate a general reduction in production with this technology.

The week of April 4 ended with an increase in electricity demand of between 1.5% and 4.2% compared to the previous week in the markets of France, Germany, Spain and Portugal. However, in the markets of Italy, Belgium, the Netherlands and Great Britain, the demand fell, with the latter registering the largest decrease, of 7.7%.

In the week of April 4, the prices of almost all European electricity markets analysed at AleaSoft Energy Forecasting fell compared to the previous week. The exception was the EPEX SPOT market of France, with a price rise of 2.1%. On the other hand, the largest drop in prices was that of the German market, of 51%. On the contrary, the smallest decrease was that of the IPEX market of Italy, of 3.7%. In the rest of the markets, the price decreases were between 6.7% of the MIBEL market of Spain and Portugal and 37% of the Nord Pool market of the Nordic countries.

In the first week of April, the average prices were lower than €295/MWh in all analysed electricity markets, although in almost all cases they exceeded €160/MWh. The exceptions were the German market and the Nord Pool market with weekly averages of €101.31/MWh and €103.93/MWh, respectively. On the other hand, the highest average was that of the French market, which reached a value of €294.47/MWh, followed by that of the Italian market, of €267.09/MWh. In the rest of the markets, the prices were between €164.17/MWh of the Belgian market and €234.16/MWh of the N2EX market of the United Kingdom.

Regarding hourly prices, on April 4, from 8:00 a.m. to 9:00 a.m., a price of €2987.78/MWh was reached in France, the highest since October 2009. This price was favoured by the low temperatures and the fact that a significant part of the French nuclear reactors were not in operation.

On the other hand, on Saturday, April 9, in the afternoon, negative hourly prices were reached in the markets of Germany, Belgium and the Netherlands. In the case of the Belgian market, there was also an hour with a negative price on Thursday, April 7.

The first week of April ended with falls in settlement prices of electricity futures for the third quarter of the year in most markets. The exceptions were the Nordic region and the Iberian region. Both in the ICE market and the NASDAQ market of the Nordic countries, rises of 10% were registered. However, the EEX market of Spain and the OMIP market of Spain and Portugal led the price increases for this product. They registered increases of more than 30%. Specifically, in the EEX market of Spain, the settlement price increased by €51.25/MWh between the sessions of April 1 and 8, being the market with the highest price increase in this period. In the rest of the markets, prices fell between 3% and 6% between these sessions.

Concerns about demand due to the increase in coronavirus cases and the confinements in China favoured the downward trend in Brent oil futures prices in the first week of April. In addition, the announcement of the amounts of oil to be released from the strategic reserves of the member countries of the International Energy Agency with the aim of reducing the tension caused by the Russian invasion of Ukraine in the market also contributed to the decreases in prices.

AleaGreen, the AleaSoft Energy Forecasting’s division specialised in long-term price curves forecasting reports for European markets, is offering the reports corresponding to the second quarter with a special promotion. The forecasts have hourly granularity throughout the forecasting horizon, they include the annual confidence bands corresponding to the P15 and P85 percentiles and the prices captured by solar photovoltaic and wind energy.

Those interested in energy storage and hybridisation, key issues in the energy transition, have an opportunity to delve into them in the next AleaSoft Energy Forecasting’s webinar “Prospects for energy markets in Europe. Vision of the future: energy storage”, which will take place on April 21. The webinar will also analyse the evolution of the European energy markets in recent weeks.