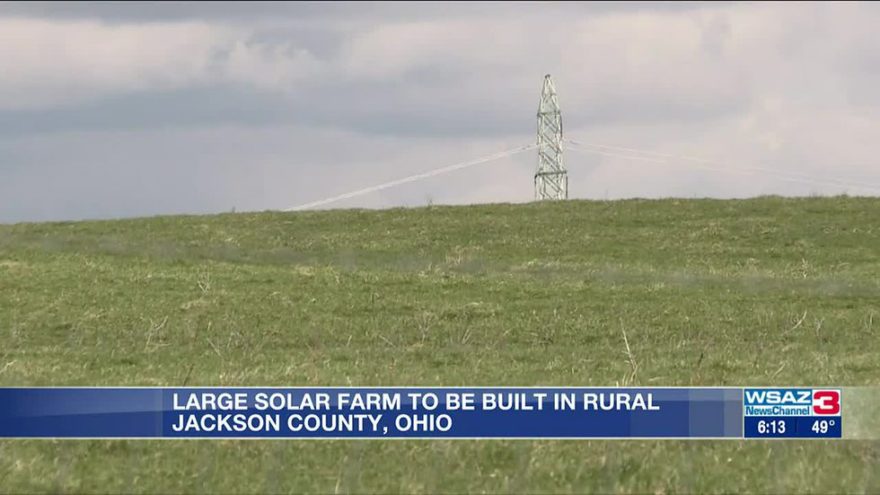 JACKSON COUNTY, Ohio (WSAZ) – A large solar farm project is in the works. Jackson County Commissioner Jon Hensler says it has been a long process, but he’s excited for the impact it will have on the area.

“In the short-term, we’ve been told that it will create between 500 to 600 jobs for approximately two or three years. After that, there will be a small remnant of those jobs that can remain long-term,” Hensler said.

It is called the Dixon Run Solar Farm project. Solar panels will be constructed on 2,000 acres worth of land in the area along Dixon Run Road. Upon completion, it will generate nearly $1 million in annual tax revenue.

“That money is going to go to local fire departments, local school systems, to local townships to fix roads and bridges,” Hensler said.

However, some who live near the project site are not thrilled. Jim Hammons and Dana Schutte have a sign on their property that says ‘Say No to solar farms’. They moved to the area around two years ago.

“We wouldn’t have bought the property had we known,” said Schutte, referring to the project.

Schutte has a long list of concerns and has not been shy about sharing them with local officials.

“We worry about soil erosion, property values, thing like that are concerning,” she said.

She also fears that their could be health risks and worries about the wildlife that she has come to know and love since moving to the area.

“We like the wildlife, we like the owls, all of the birds that come and roost. It’s just beautiful out here. We like hearing the cows. Now it sounds like we are going to be hearing metal pounding into the ground,” Schutte said.

Schutte says she has raised many of these concerns at recent public hearings, but still, the project remains on schedule to begin construction in 2023.

“I can empathize with their situation,” said Commissioner Hensler. “But also looking at it from a governing perspective, when you have something that is going to benefit 99.9% of the residents in your county, we are not in a position to stonewall a project such as this.”