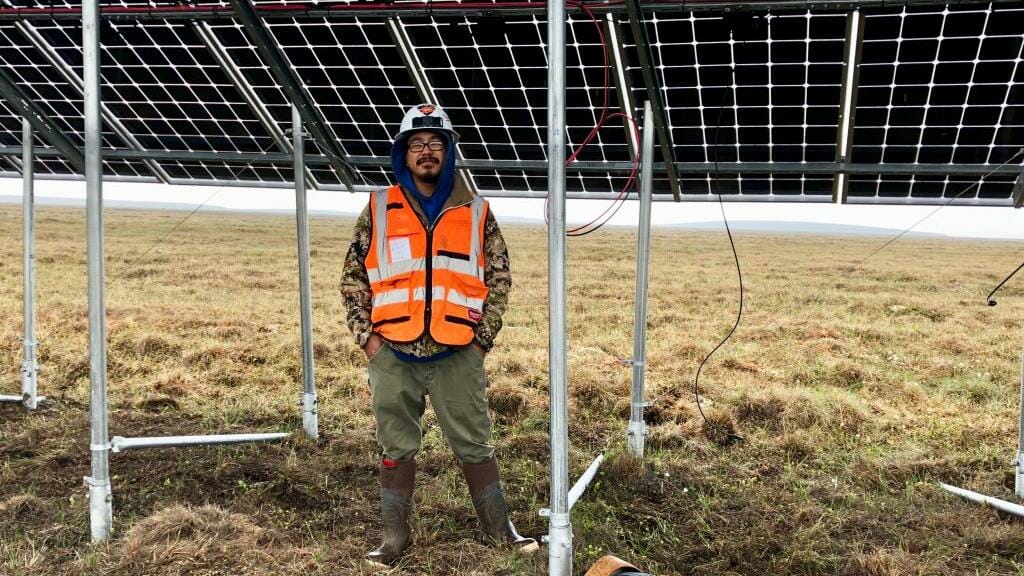 Since construction of Kotzebue Electric Associationâ€™s solar project began in May, a locally hired crew has clocked in ten-hour days, six days a week. Theyâ€™ve hauled 1,440 solar panels across uneven tundra and installed the final one on June 18. The 576-kilowatt project is the second largest in the state, next to the Willow Solar Farm in the Matanuska-Susitna Borough.

The construction site is southeast of the local airport, at the end of a long, gravelly access road. The rows of panels bring new fixtures to a rolling landscape marked by an aging wind farm that began Kotzebue Electric Associationâ€™s run with renewable energy in the late 90s.

â€śWhen we first installed the first three wind turbines at the wind farm, as we call it, we thought that was the greatest thing ever in the world,â€ť said Matt Bergan, an engineer with Kotzebue Electric Association.

The coast of Northwest Alaska proved to be a prime location for capturing wind energy, and Bergan says, over the years the project expanded.

â€śNow we have 900-kilowatt turbines, in addition to our fleet of smaller turbines which are aging and approaching end of life,â€ť he said.

Bergan is overseeing the new solar project, which in a lot of ways offsets those obsolete turbines. He says it was made possible by a global drop in the price of solar hardware over the last several years. Installation costs in tundra and permafrost are still relatively high, however.

â€śIt makes it somewhat more affordable, and thatâ€™s what weâ€™re really going to see once itâ€™s operational, is what the cost-benefit analysis looks like as far as what weâ€™re producing vs. what it costs. It looks promising, though,â€ť Bergan said.

Kotzebue Electric Association general manager Martin Shroyer says that initial costs have been absorbed by local entities that also have a stake in rural energy concerns. NANA Regional Corporation received federal money to split between Kotzebue and the villages of Buckland and Deering for solar, the Northwest Arctic Borough contributed funds to the project through a grant, and Kotzebue Electric Association contributed some funding of their own.

â€śSo once we received that money, or grant, we hit the ground running,â€ť Shroyer said.

Shroyer says that there have been some delays to the project, the most recent being the COVID-19 pandemic which put construction behind about five weeks and increased costs. Installation was supposed to begin in late February after a successful 2019 bid from general contractor Alaska Native Renewable Industries.

The company is based out of the Interior village of Huslia, which, like Kotzebue, is off the road system, but about ten times smaller in population. Founder and CEO Edwin Bifelt worked on a similar solar project in the neighboring village of Hughes, which has a population of about 75. His next bid is east of Kotzebue in Shungnak.

â€śYou could do this with any community in the state, so weâ€™re hoping to keep going with this for the next five, ten years,â€ť Bifelt said.

Keeping in step with the goals of the Kotzebue Electric Association project, he wants to maintain a focus on local hire in rural sites.

â€śGrowing up in the village, or rural Alaska, I knew that there was always a lot of talent in the community. A lot of skilled tradespeople,â€ť Bifelt said.

Local employment is indeed another way these renewable projects allow for rural self-reliance. Along with local hire, Shroyer says the scale of the project is also driving interest from the community.

â€śI think the amazement is how big it is. How, itâ€™s only 576 kilowatts, but how much land it takes. Itâ€™ll generate a good seven months out of the year and itâ€™s pretty exciting; weâ€™ve got our board excited, and locals,â€ť he said.

Though the electric association will still rely on diesel generators, its goal is to get to about 50% renewables. Once the project is up and running, residents should see the fuel cost adjustment figure go down on their utility bills.