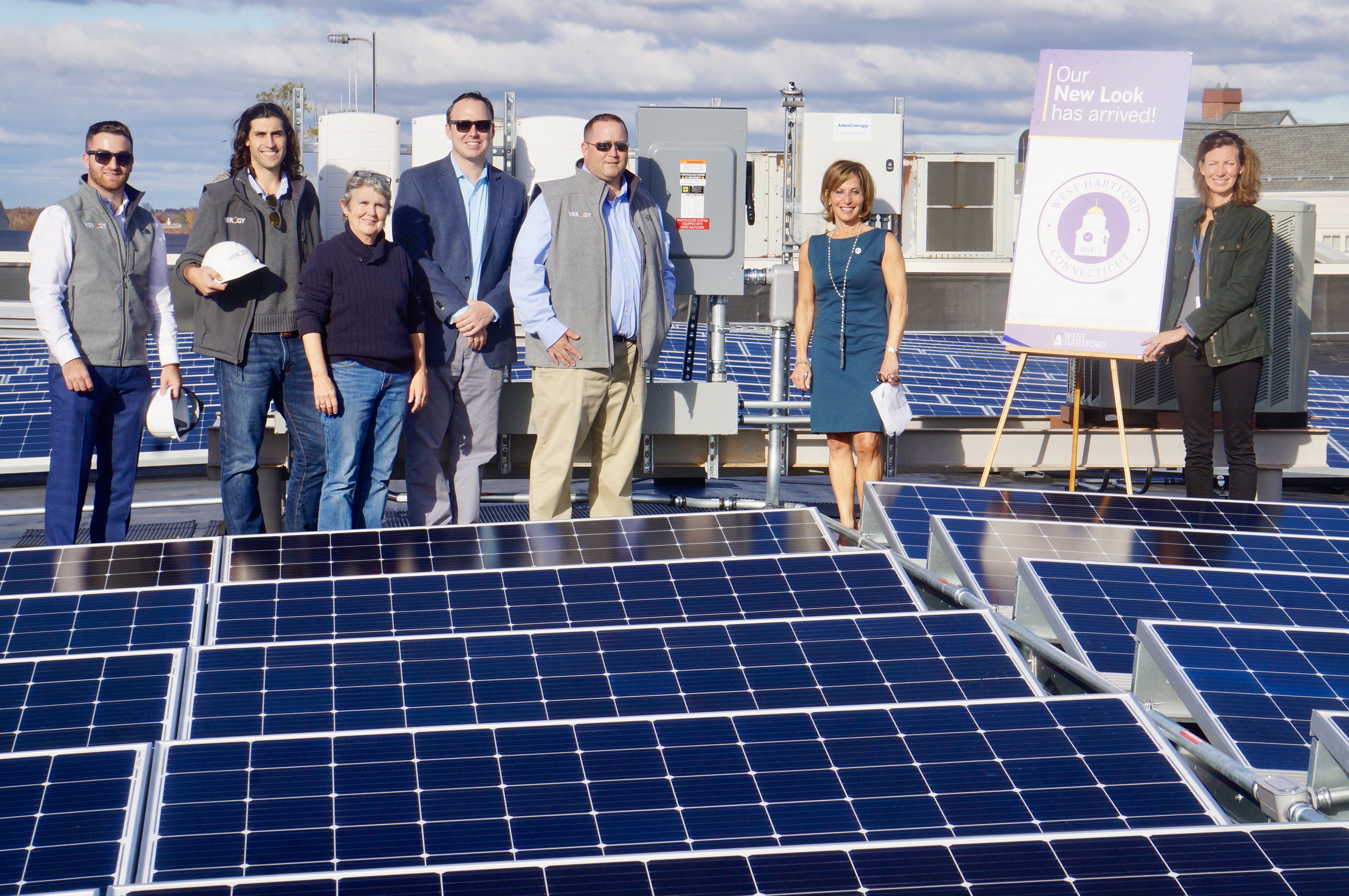 No one felt a jolt of electricity, or heard a discernible hum, but as West Hartford Mayor Shari Cantor flipped a switch on the roof of Town Hall Monday afternoon, the bright autumn sunshine began quietly and efficiently powering the building below.

The rooftop solar photovoltaic system atop Town Hall is West Hartford‚Äôs newest solar energy project to be brought online, and will provide about 20 percent of the building‚Äôs power through a sustainable, green, and renewable source.

‚ÄúThis is a very, very exciting day,‚ÄĚ Mayor Shari Cantor said as she gathered on the roof for a brief ceremony with West Hartford Energy Specialist Catherine Diviney, Deputy Mayor Beth Kerrigan, Council member Liam Sweeney, and representatives from Verogy ‚Äď the Hartford-based company that installed the array. ‚ÄúThis is a signal that we are really really truly are invested in making our world a better place,‚ÄĚ she added.

Cantor said she wishes the town could have installed an even larger system ‚Äď but the roof is only so big.

‚ÄúThe installation is one of about a dozen projects that we‚Äôve done town wide,‚ÄĚ said Cantor, and represents ‚Äúone more step in West Hartford‚Äôs overall commitment to and vision for a clean energy future for our community, state, and world beyond‚ÄĚ and the town‚Äôs commitment to leading by example in changing our behavior.

As the commitment to energy efficiency continues, the town will soon activate a 600 kilowatt installation on the new roof of King Philip Middle School ‚Äď a project that is five times larger than the one at Town Hall.

Cantor noted the role and hard work of Diviney in changing the way the town looks at energy, as well as the contributions of West Hartford Plant and Facilities Director Bob Palmer and the members of the Clean Energy Commission ‚Äď Bernie Pelletier, Max Duboison, Chris Nelson, Joe Campanella, Dave Mello, and James Capella ‚Äď for their role in making this project possible, as well as with education and outreach campaigns in the schools and throughout the community.

‚ÄúThrough energy efficiency projects and LED lighting, we have reduced our total electricity use in our town operations by 20% over the past seven or eight years ‚Äď¬†or a reduction of over 4 million¬†kilowatt hours, with an avoided cost of over $700,000,‚ÄĚ Cantor said. ‚ÄúNot only does it make sense to go green, but it makes green sense.‚ÄĚ

Cantor said that the town will continue installing ‚Äúbehind the meter solar projects like this one where feasible, participating in Eversource‚Äôs virtual net metering program with a solar farm in Northeastern Connecticut, and purchasing renewable energy credits (or RECs) to offset what‚Äôs left.‚ÄĚ

By the end of 2020, Cantor said, ‚ÄúI think you‚Äôll see an¬†announcement that West Hartford‚Äôs municipal electricity is coming from 100% renewable sources, which is something that will make me so very, very proud.‚ÄĚ

According to the town, the array on Town Hall falls under a ‚Äúpower purchase‚ÄĚ agreement with Hartford-based solar developer and installer Verogy.

Verogy installed the system, and owns and operates it, selling power to the Town of West Hartford at a lower rate than it could be obtained from other utilities or suppliers. As a municipality, the town itself would not be able to take advantage of the Zero Emission Renewable Energy Credit (ZREC) Program.

Steve DeNino, co-founder and COO of Verogy, said the 100 kilowatt AC/122 kilowatt DC array at Town Hall includes 346 solar modules and will produce about 141,000 kilowatt hours annually ‚Äď equivalent to the energy usage of about 16 Connecticut homes. ‚ÄúThese solar panels go a long way in helping the environment,‚ÄĚ he said.

Diviney said the town is looking to install solar panels when roofs are being replaced, noting that it makes sense to do it only on new ‚Äď or newer ‚Äď roofs because of the hassle and expense of removing the panels for a roof replacement. Town Hall‚Äôs roof is relatively new, she said.

King Philip Middle School, which has had a new roof installed over the past three summers, is a very large, one-story spread out building, so it can support a massive array, said Diviney.

‚ÄúThis is what we call a ‚Äėbehind the meter‚Äô system, so the energy that‚Äôs produced is used by the building first,‚ÄĚ Diviney said of the Town Hall project. ‚ÄúBut if it‚Äôs producing more than [Town Hall] is actually using, then it‚Äôs sent out to the grid.‚ÄĚ She said that‚Äôs not likely to happen often, other than maybe on a really sunny Sunday morning when no one is in Town Hall.

The system being built at King Philip, however, will definitely produce way more than the building is using at certain times. Aiken Elementary School‚Äôs current system produces more than the school uses in the summer, sending energy back to the grid and resulting in credits for the town.

Diviney noted that since the ZREC Program¬†came about, most solar arrays, including the one on Town Hall, are run through that program. The town neither owns nor operates this project, and Verogy receives the tax credits, which allows the company to offer discounted power to West Hartford.

When she was hired several years ago, the town only had one array which was placed on the roof of Bristow Middle School when it opened in 2005, Diviney said. Three smaller arrays were also installed under grant-funded programs.

The town does own the array at Charter Oak International Academy, which was installed as part of the construction of the school, much of which was funded by grants.

Like what you see here?¬†Click here to subscribe to We-Ha‚Äôs newsletter¬†so you‚Äôll always be in the know about what‚Äôs happening in West Hartford! 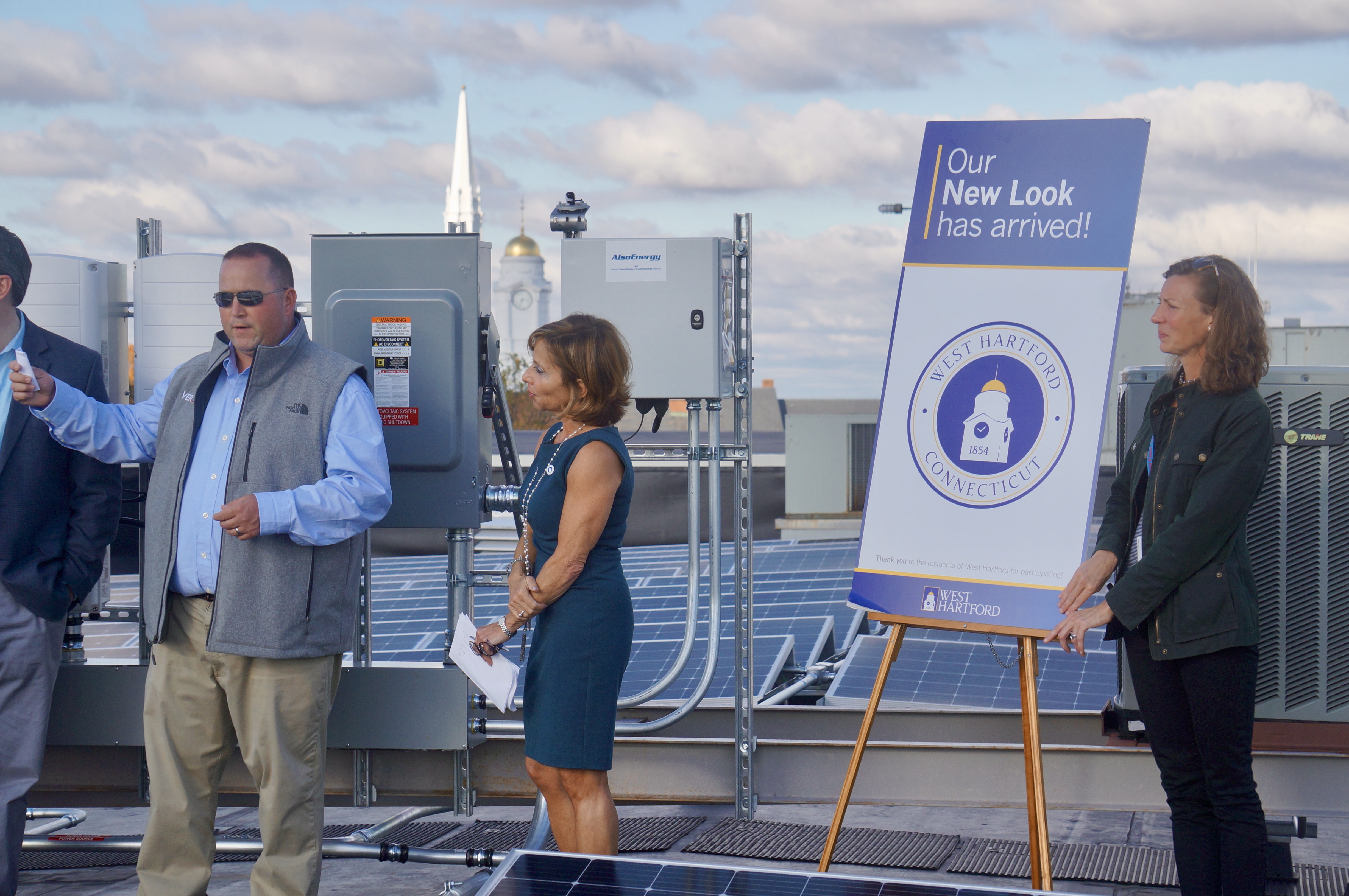 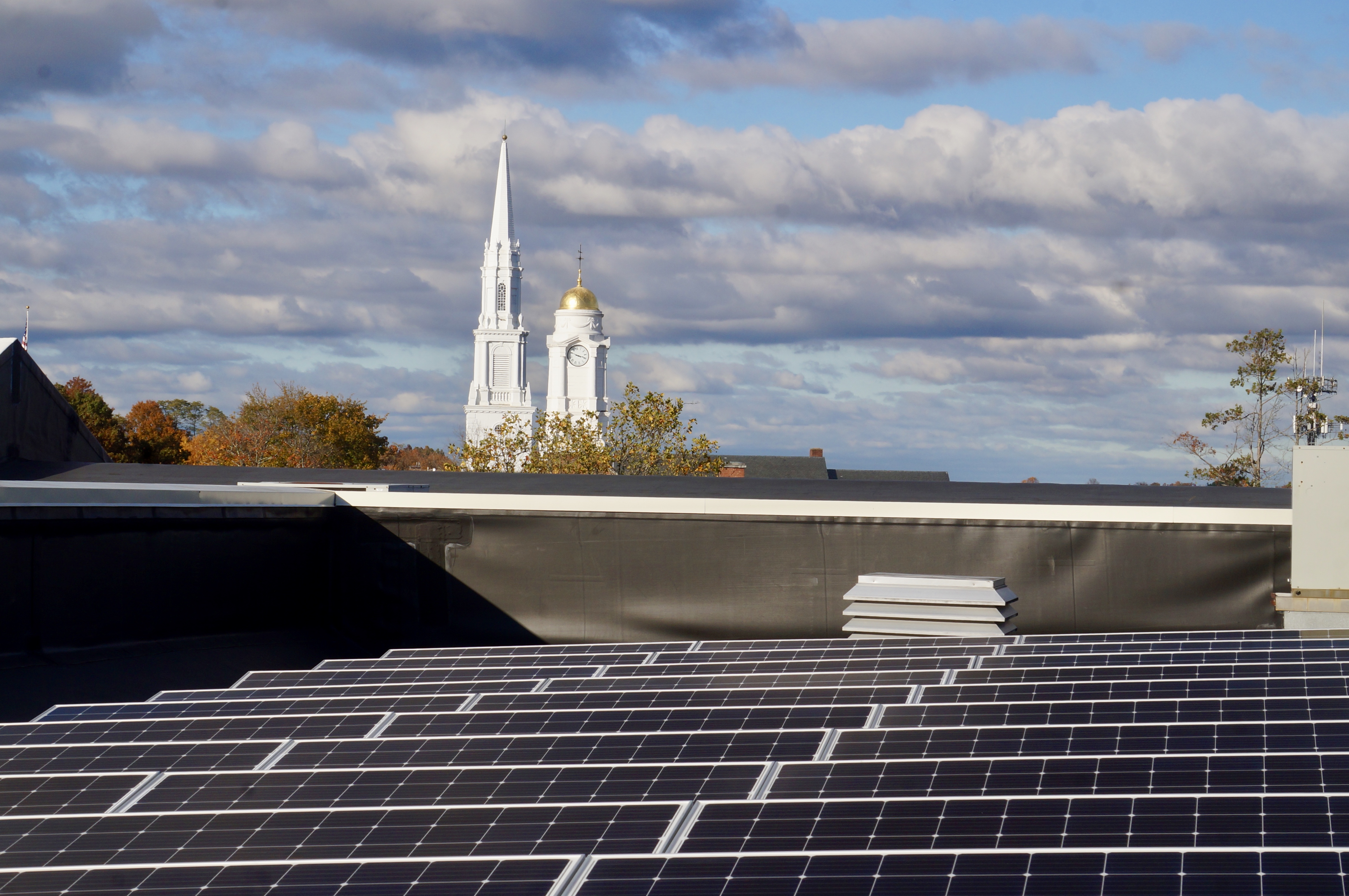 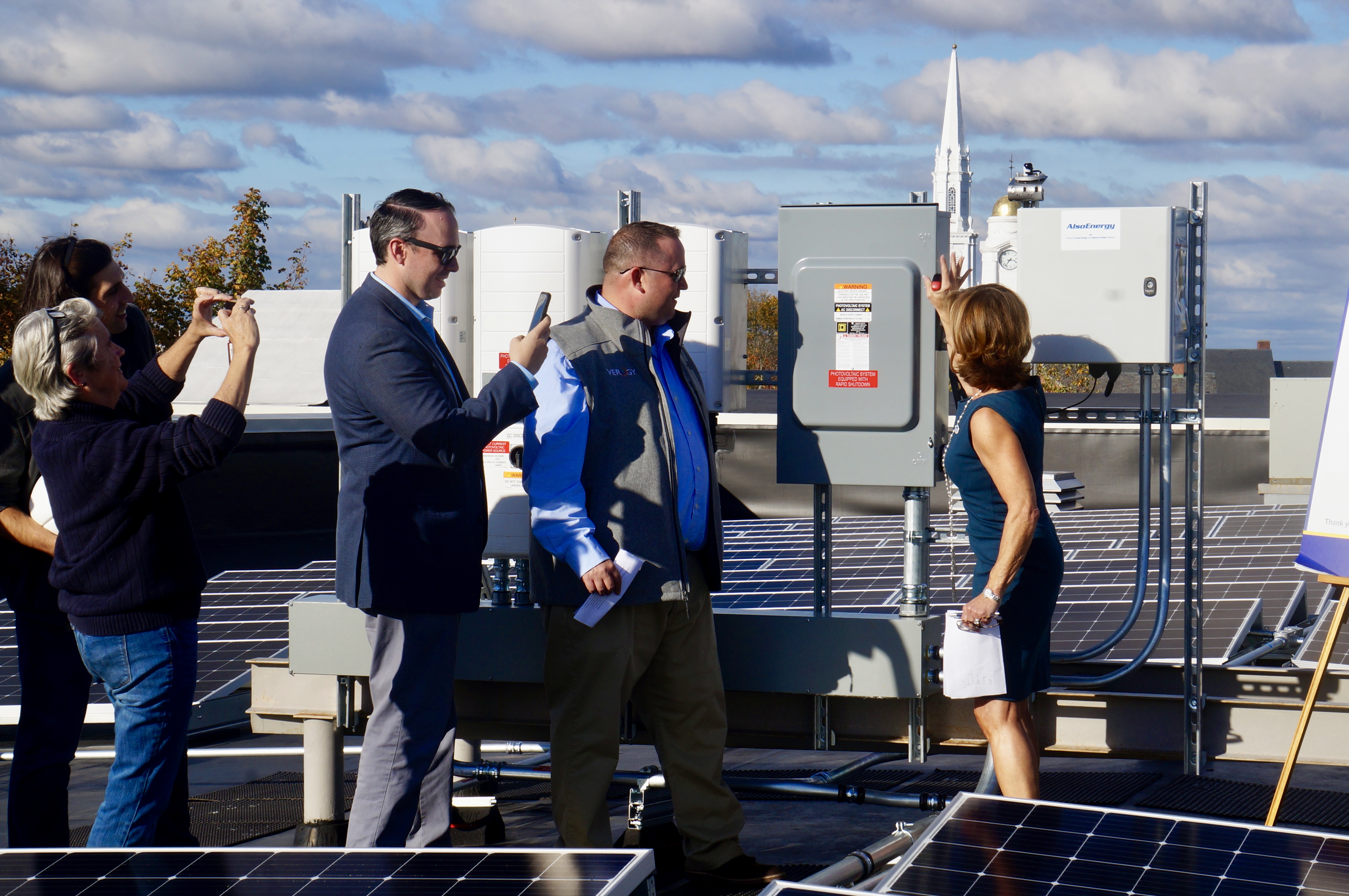 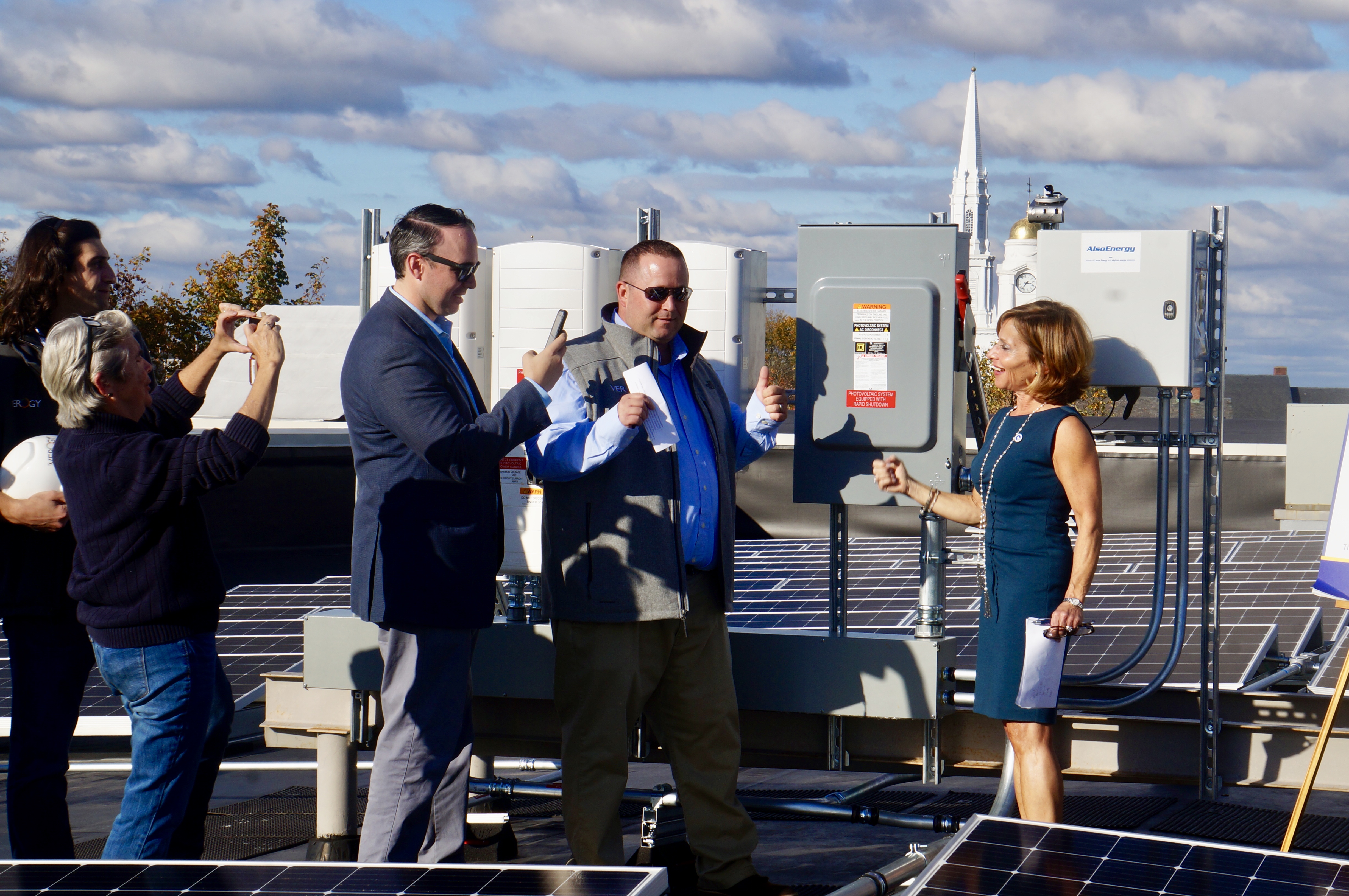 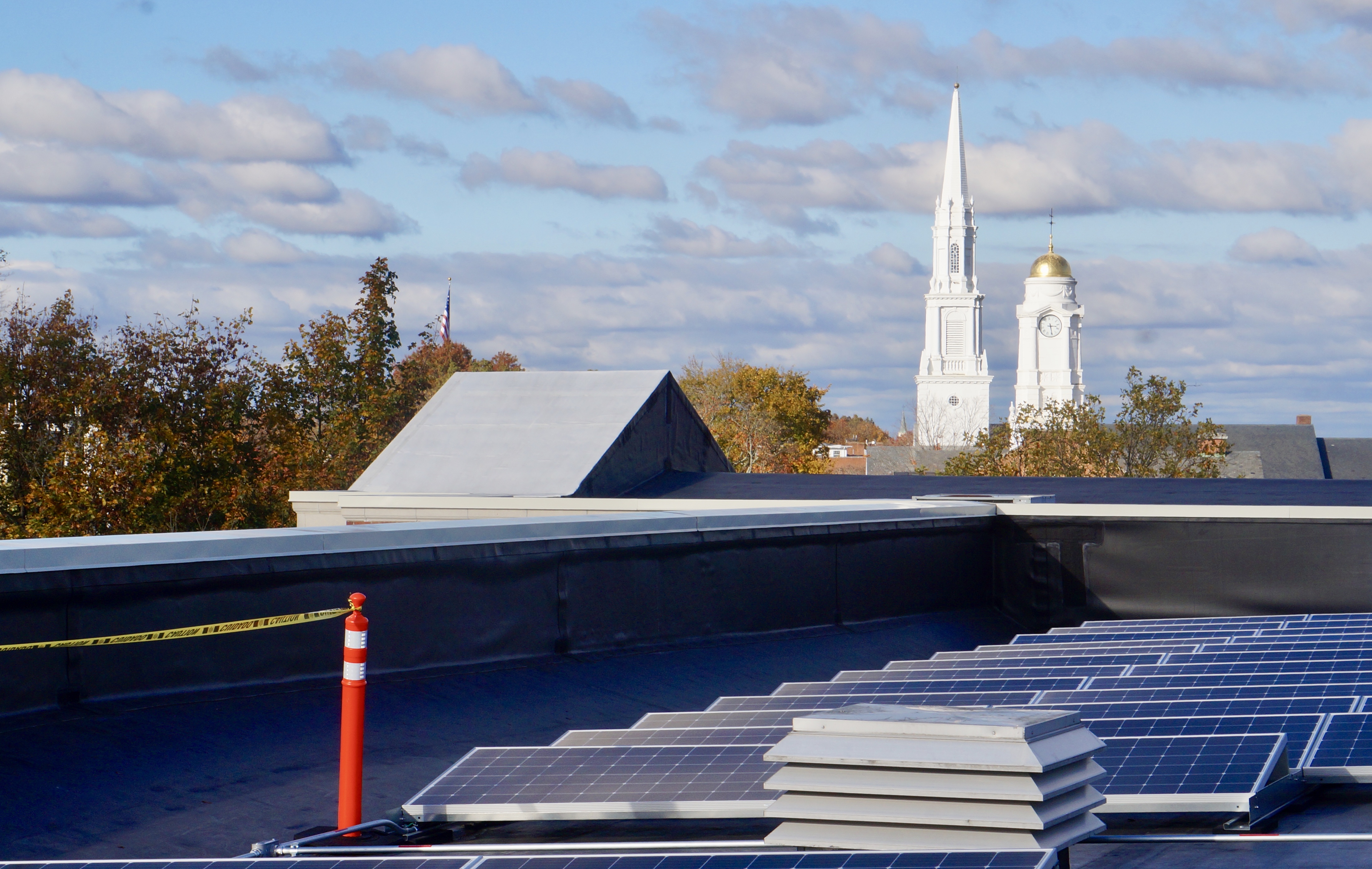