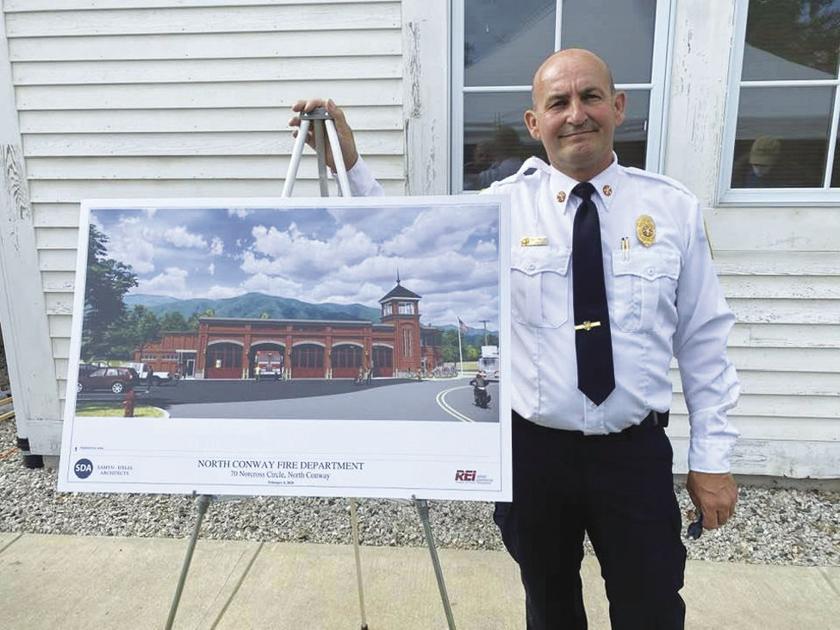 CONWAY — It was a long wait for North Conway Water Precinct voters to get their annual meeting, which was originally set for March 20, but after several COVID-19 pandemic-caused postponements, proponents of a new North Conway Fire Station got their wish, as voters overwhelmingly approved the proposal.

An article calling for expansion of the solar array at the NCWP Wastewater Treatment Plant, also passed.

In fact, only one article did not pass. Article 10 had sought $40,000 for a wastewater asset management program to be offset with a $20,000 grant from the state Department of Environmental Services and $20,000 from water revenues. It was defeated after NCWP Superintendent Jason Gagnon explained that the grant deadline had passed and that the delay in holding the meeting nixed the precinct’s ability to apply for the grant.

Held outdoors next to the precinct offices at 104 Sawmill Lane under a large rented tent Saturday afternoon, the meeting was attended by 48 voters, many of whom left after voting by secret ballot on Article 2, the fire station proposal, and Article 3, the solar panel expansion.

The outcome of the fire station article was hailed by precinct officials.

“We can’t thank the voters enough for their support,” said Suzanne Nelson, precinct commissioner and Fire Station Expansion Committee chair after the voting results were announced.

Nelson’s comments were echoed by Preece, who thanked voters for passing the article, which he said will lead to heightened safety for firefighters.

“In the past few years, we have come to realize how firefighter cancer rates are extremely high (compared with the general population) due to soot and smoke touching firefighters, and we need to get that contact time down for firefighters and for people who work in the station,” Preece said.

“There are those carcinogens and off-gases coming back with the firefighters and the equipment after a call. This will give us the ability to wash three or four sets of gear at once and get them into the dryers, allowing us to separate clean gear from dirty gear. … So, this will eliminate cross-contamination.

“This will also enable firefighters to shower there at the station after responding to a fire and to not bring those chemicals home with them to their families,” he added.

Preece said the brick building will be constructed on the site of the current 1960-built fire station on Norcross Circle located between the North Conway Train Station and clubhouse of the North Conway Country Club.

Nelson and Preece said the new five-bay station will complement the village’s architecture, noting that the committee worked with project managers REI Service Corp. of Manchester and Sugar Hill,.

Nelson and Preece said the station is being built to last at least 75 years and will serve the long-term needs of the community.

A meeting is set for Thursday to go over the projected time frame for construction, Preece said.

The new $6.7 million building is expected to be completed by next June. During the interim, the fire department will house equipment and dispatch personnel out of its Seavey Street garage and also store equipment in the parking areas of the North Conway Wastewater Treatment Plant.

According to renderings, the new brick building would have five bays, a “dirty” holding area, clock tower and offices on the northern end. Above the offices would be an upstairs area with a kitchen and living area for the firefighters. The lower level will have a small conference room and office for the chief as well as support spaces for accessing the vehicle bays. Upstairs, there will be a training/common room, bunk room and kitchen space and an atrium over the rescue vehicle bay.

Proponents said the annual meeting’s delay actually improved the projected cost of the fire station project as construction companies that were out straight with jobs before the pandemic may bid on the project with more competitive rates. And with interest rates still at historic low figures, that potentially makes for a more favorable project for taxpayers.

According to Gagnon, the projected tax impact cost will be 53 cents per thousand-dollar valuation. He explained how although separate, the fire station article and solar array articles were connected in terms of how annual savings in electrical power can be used to offset some of the costs of the fire station project, decreasing tax bills by 17 cents per thousand dollar valuation.

Gagnon said the solar expansion will increase the plant’s current output of 165 kilowatts to about 850 KW.

“We had a third party, the state Department of Environmental Services energy folks, take a look at (solar installer) ReVision Energy’s estimates, and they told us that when Plymouth did their project, they paid $3 per KW in terms of insulation costs, but solar costs have come down in the past six years so we will be paying $1.52 per KW. That’s a reduction of about 50 percent in solar costs,” said Gagnon.

The solar article asked voters to raise and appropriate the sum of $1.989 million for the design and construction of the additional solar infrastructure at the NCWP Wastewater Treatment Plant. The article will be funded with $95,000 from the NCWP Energy Upgrade Capital Reserve and the remainder from existing sewer fund balance with no new additional funding ot be raised.

“We will basically pay for the solar project partly out of our sewer funds balance, which is money we have already in the ban,” said Gagnon.

“And we will use money we have paid in a greener energy capital reserve account, which is money we have gotten from the sale of renewable energy credits over the years, which is from our original solar project built in 2009,” he added.

The only amended article was Article 9, a $646,924 appropriation for capital reserve funds, which was reduced to $426,994 after a motion by Nelson.