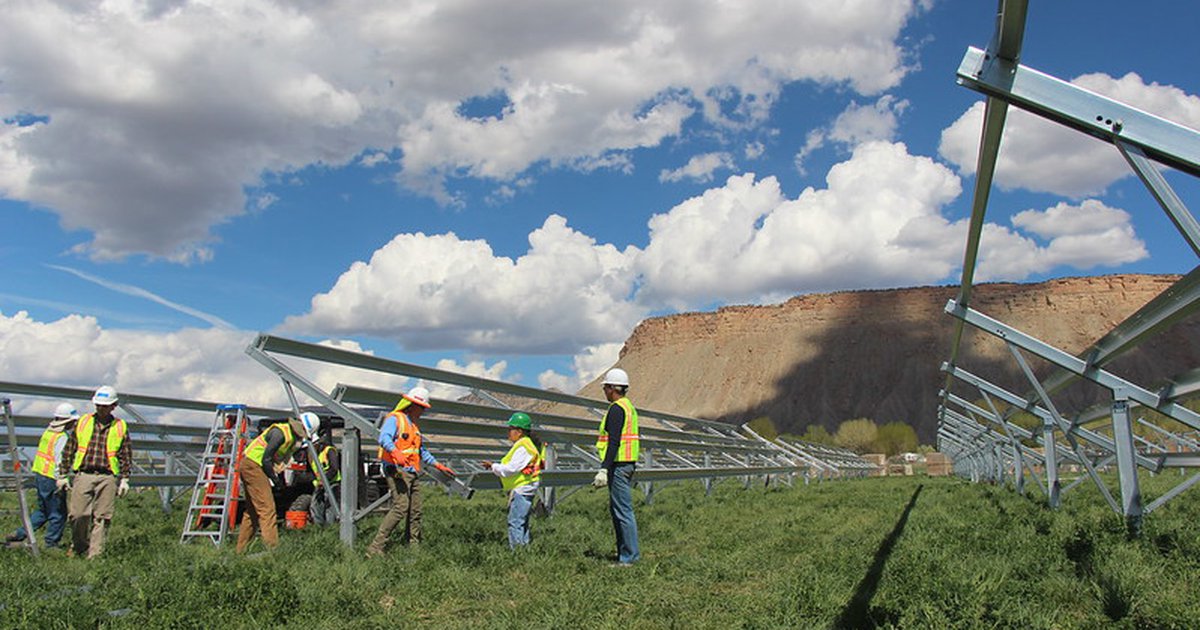 Every time the sun shines on the Ute Mountain Ute community of White Mesa next year, new solar panels on the townâ€™s government buildings will generate electricity, eventually saving the tribe on energy costs.

â€śWe’re looking to save the tribe a lot on its White Mesa government electric bills with this installation,â€ť said Scott Clow, the Ute Mountain Ute Tribeâ€™s environmental programs director. â€śWeâ€™re pretty excited we got [the grant].â€ť

â€śWeâ€™re really excited about being able to partner with [the Ute Mountain Ute Tribe] to help fulfill and reach their goals of installing installing solar PV, job creation and working towards energy sovereignty,â€ť he added.

That project, which was partially funded by a larger Department of Energy (DOE) grant, will sell power to the Ute Mountain Casino Hotel, and the revenue generated will save money on electric bills for tribal citizens.

The Towaoc project â€ścame online in March, and weâ€™ll be generating close to one megawatt of power for hopefully 20 or 30 years,â€ť Clow said.

For now, the White Mesa project wonâ€™t include the same direct revenue-generating component, but that could be added at a future date.

â€śWeâ€™re definitely looking at the next steps in both communities, whether that is home-by-home solar installations or a larger project,â€ť Clow said. â€śWhite Mesa is a pretty economically depressed place, so if we could create a revenue stream and a job there, that would go a long way in the community.â€ť

The grant for the White Mesa installation was part of $5 million in funding for nine tribal energy infrastructure projects supplied by the DOE this year.

â€śThe selected projects are consistent with the principles of tribal sovereignty and self-determination, with a fuel- and technology-neutral energy strategy that recognizes the breadth of energy resources on tribal lands, and each tribeâ€™s right to use them as they see fit,â€ť Office of Indian Energy director Kevin R. Frost said in a statement.

â€śCombined, these projects add up to over 3.7 megawatts of installed generation that will power over 180 tribal buildings, with combined lifetime savings of over $24 million â€” significant investments that will yield tangible results to improve the quality of life for these communities,â€ť Frost said.

Clow noted that the Ute Mountain Ute Tribe has received substantial assistance from the DOE over the past 10 years and praised its Office of Indian Energyâ€™s grant program. â€śFrom the northernmost tribes in Alaska to the southernmost tribes in Florida, [many] are benefiting from these DOE grants to help their energy needs and their economies,â€ť he said.

â€śWe talked about energy impacts to the White Mesa community with the uranium mill,â€ť Clow said. â€śYou know, living in the shadow of that mill for your whole life, breathing the air that blows down from there and worrying about groundwater contamination and the like â€” it affects people who live there. And so for that community to generate clean energy, I think that is a pretty significant thing and something to really be proud of.â€ť

The project was scheduled to start later this year, but GRID Alternatives will be working with Ute Mountain Ute leaders to determine when it will be safe to carry out the project given coronavirus concerns.

Zak Podmore is a Report for America corps member and writes about conflict and change in San Juan County for The Salt Lake Tribune. Your donation to match our RFA grant helps keep him writing stories like this one; please consider making a tax-deductible gift of any amount today by clicking here.