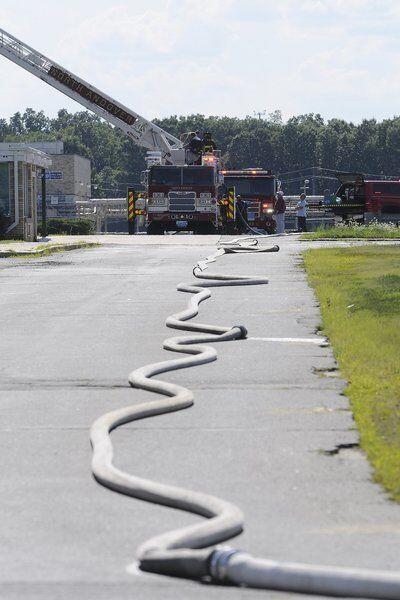 NORTH ANDOVER â€”Â FirefightersÂ responding to a one alarm fire on the roof ofÂ 1600 Osgood Landing encountered flames and black smokeÂ billowing into the sky that could be seen from across the Merrimack River.

The fire was reported at 2:43 p.m. and involved numerous calls to the department.

Deputy Chief Graham Rowe said to access the best source of water, his crews laid out 800 feet of four-inch hose that crossed Route 125 to connect to a town hydrant. The road had to be closed to traffic for about an hour, he said.

North Andover was on scene withÂ two engines a ladder and two ambulances, while Lawrence and Andover sent two engines.

It took between 30 and 45 minutes to bring the fire under control, with damages limited to an area of the flat roof of one of the former Lucent Technologies buildings where there are about 80 to 100 solar panels, many of which were damaged or destroyed, Rowe said.

Assisting at the scene were crews from Lawrence and Andover, while Lawrence and Methuen provided backup at North Andover’s two fire stations, he said.

In addition to the heat from the fire, it was also a very hot day, which Rowe said was madeÂ more tolerable with help from Roger Baker and Rehab 5, a nonprofit organization from Peabody that has been serving North Shore firefighters since 1986.

Baker and Rehab 5 work alongside area fire departments, providing water or sports drinks. In more extreme situations, they have equipment that can help the firefighters cool down, and they can cook meals for them on scene during longer-lasting fires.

“TheyÂ made sure the guys were cooled off so that we were able to rotate in fresh crews,” Rowe said about Rehab 5.

North Andover fire investigators along with with the state Fire Marshall’s office are still looking into the cause of the blaze.

“We had a smoke condition inside, but after further investigation by three crews we determined the fire had not spread to the inside and was contained to the roof,” Rowe said.

For Rowe, it a bit of deja vu.

He said that on July 5, hisÂ department responded to a fire on the roof of a different building at 1600 Osgood St.

That fire wasn’t as large as Friday’s fire, and was believed to have been caused by a solar panel inverter box.

“The are still investigating that inverter, which was sent out for testing,” Rowe said.