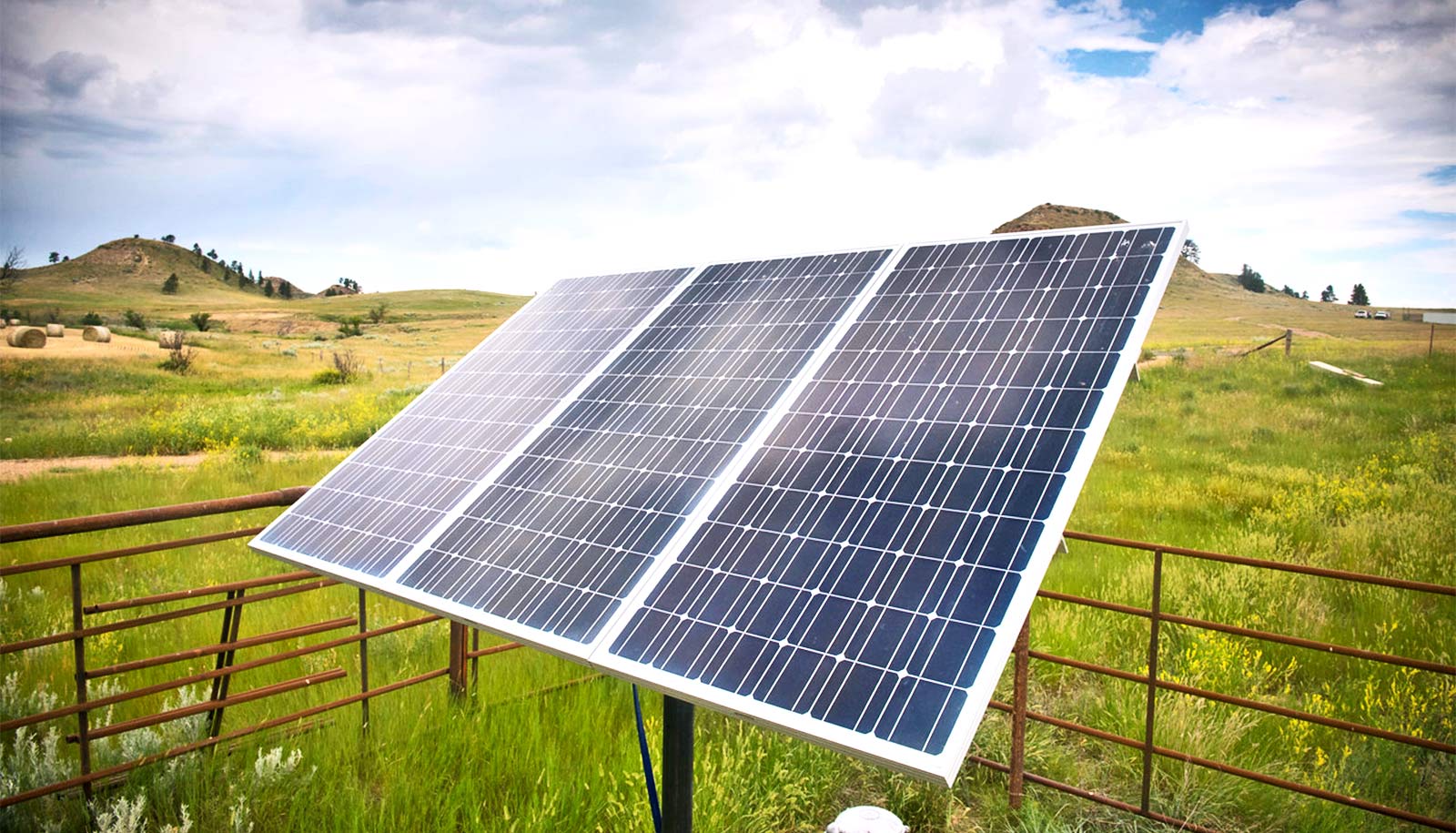 You are free to share this article under the Attribution 4.0 International license.

A new thermodynamic formula reveals that bifacial solar cells in double-sided panels generate on average 15 to 20% more sunlight to electricity than the todayâ€™s one-sided solar panels.

Most of todayâ€™s solar panels capture sunlight and convert it to electricity only from the side facing the sky. If the dark underside of a solar panel could also convert sunlight reflected off the ground, the panels might generate even more electricity.

Double-sided solar cells are already enabling panels to sit vertically on land or rooftops and even horizontally as the canopy of a gas station, but it hasnâ€™t been known exactly how much electricity these panels could ultimately generate or the money they could save.

The formula, which also takes into consideration different terrain such as grass, sand, concrete, and dirt, can calculate in minutes the most electricity that bifacial solar cells could generate in a variety of environments, as defined by a thermodynamic limit.

â€śThe formula involves just a simple triangle, but distilling the extremely complicated physics problem to this elegantly simple formulation required years of modeling and research. This triangle will help companies make better decisions on investments in next-generation solar cells and figure out how to design them to be more efficient,â€ť says Muhammad â€śAshrafâ€ť Alam, professor of electrical and computer engineering at Purdue University.

In their paper in the Proceedings of the National Academy of Sciences, Alam and coauthor Ryyan Khan, now an assistant professor at East West University in Bangladesh, also show how they can use the formula to calculate the thermodynamic limits of all solar cells developed in the last 50 years. These results can be generalized to technology likely to be developed over the next 20 to 30 years.

The hope is that these calculations would help solar farms to take full advantage of bifacial cells earlier in their use.

â€śIt took almost 50 years for monofacial cells to show up in the field in a cost-effective way,â€ť Alam says. â€śThe technology has been remarkably successful, but we know now that we canâ€™t significantly increase their efficiency anymore or reduce the cost. Our formula will guide and accelerate the development of bifacial technology on a faster time scale.â€ť

The paper might have gotten the math settled just in time: experts estimate that by 2030, bifacial solar cells will account for nearly half of the market share for solar panels worldwide.

Alamâ€™s approach is called the â€śShockley-Queisser triangle,â€ť since it builds upon predictions made by researchers William Shockley and Hans-Joachim Queisser on the maximum theoretical efficiency of a monofacial solar cell. This maximum point, or the thermodynamic limit, can be identified on a downward sloping line graph that forms a triangle shape.

The researchers use the formula to recommend better bifacial designs for panels on farmland and the windows of buildings in densely-populated cities. Transparent, double-sided panels allow solar power generation on farmland without casting shadows that would block crop production. Meanwhile, creating bifacial windows for buildings would help cities use more renewable energy.

The paper also recommends ways to maximize the potential of bifacial cells by manipulating the number of boundaries between semiconductor materials, called junctions, that facilitate the flow of electricity. Bifacial cells with single junctions provide the largest efficiency gain relative to monofacial cells.

The formula has been thoroughly validated and is ready for companies to use as they decide how to design bifacial cells.

The National Science Foundation provided support for the research.