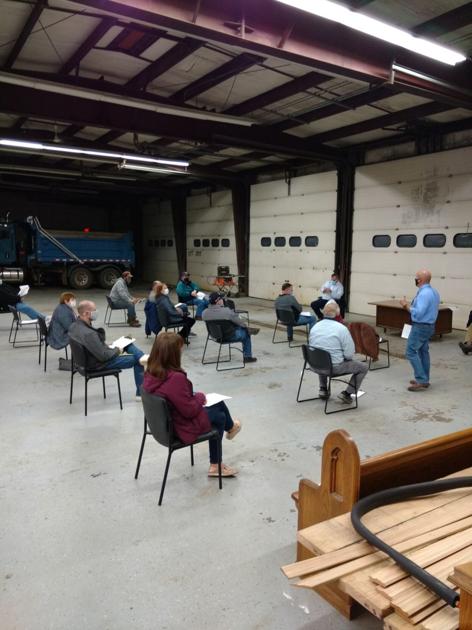 PORTVILLE â€” Solar farm installations were again the topic of conversation in Portville this past week when about 19 landowners with property near one of three proposed solar sites gathered at an invitation-only meeting.

The town of Portville has sporadically hosted representatives from various solar-energy developers at their monthly board meetings. Although the meetings are open to the public and the board has held a number of public informational meetings, concerns and questions among landowners remain. Among them are how the sites will look, the infrastructure, the future of the sites and possible government control.

â€ś(Webbâ€™s) here to talk about solar farms and the issues and questions it brings to a community,â€ť Emley said.

Developed by Borrego Solar, one of the companies that had once presented a pitch to the town board, a Houghton College solar installation was completed in 2015 and, according to the collegeâ€™s website, was the largest on any campus in New York state.

â€śThe IDA operates on a more parallel track with local government,â€ť Wiktor said. â€śWe conduct public meetings. We operate more like a bank,â€ť referring to the IDA as â€śjust a little cogâ€ť in the process of solar farm development across Cattaraugus County communities.

EMLEY STRESSED to the socially distanced and masked crowd in the Portville town garage that the town board is â€śnot jumping into this blindly,â€ť referring to the agreement allowing the leasing of two pieces of property on Haskell Road and the purchase of one site on the Windfall Road by Dimension Renewable Energy.

He said the boardâ€™s purpose for existing is to work for the community.

â€śHow do we say we donâ€™t want it?â€ť asked one skeptical landowner of Emley.

â€śThereâ€™s not many towns that would turn money down,â€ť Emley said. â€śBut Iâ€™m not going to have it come off your back.â€ť

The money he was referring to was, in part, the one-time $30,000 community host agreement payment to the town by Dimension for each site.

Wiktor went on to explain the rest of the financial benefits to the community with payments in lieu of taxes, commonly referred to as P.I.L.O.T.s, are paid every year. With 4.55 megawatts generated at each of the three sites, the 13.65 megawatts produced would also generate about $82,000 annually.

Proceeds would be shared by Portville Central School, Portville Volunteer Fire Department, the town and the county.

Emley said no permits have been issued and no construction contracts have been signed. The contract with Dimension that was scheduled to be signed Nov. 17 was not because of the boardâ€™s requirement everyone be fully educated on the process.

â€śWe want you to have a say,â€ť Emley said, stressing that what the majority wants for the community part of the democratic process. â€śYou need to be comfortable with the decision.â€ť

WEBB PROVIDED a handout that addressed popular concerns about solar projects. One was the factory-like ambience, with traffic, noise and perceived ugliness and glare.

More from this section

Webb explained that from shovel to completion takes about three or four months.

â€śMost of that, it actually looks like nothing is happening,â€ť Webb said. â€śThe only thing thatâ€™s really loud is delivery (of racking and panels) and the installation of the racking. … The inverter is the only thing that would make noise,â€ť and is said to generally not be audible past the fence line.

That led to a question about how low into the ground the racking is installed and how the piping is stabilized.

The talk of equipment also brought out concerns about the solar panels.

Webb explained that there are a number of companies worldwide that manufacture the panels, including China. He explained that a variety of materials are used, some glare-free and some not, depending on the manfacturer.

â€śA better panel was made in China than was made in the U.S.,â€ť he said. â€śThe industry has basically said that the Chinese panels are best.â€ť He knows of one solar farm that has panels over 32 years old that are still in operation.

The aesthetic of the sites was also a concern to landowners, who were assured that a fence to keep out wildlife and screening trees would be part of the landscaping. Webb pointed out that it was to the benefit of Dimension to keep out any deer or other animals that could cause damage.

â€śWe made it mandatory that twice the amount of evergreen trees, that will reach a height of between 15 and 16 feet, will be placed along the protecting fence line,â€ť Emley said. â€śThese trees will max out in height in about three years. (The panels will be 7 to 8 feet in height.)

Webb explained that part of the contractual agreements include bonding and a decommissioning plan that, after the (typically 30-year) contract has expired, the property will be returned to its original state. Some contracts have the potential for the host to buy out the developer if they feel itâ€™s still viable.

Savings in the form of an annual 30% discount is a benefit to landowners, which Emley said the town board fought for, as a 10% discount is what is typically given. Residents of the town who are not contiguous landowners will receive the annual 10% discount for the life of the contract.

LOCAL CONTROL may not be in the future, Wiktor pointed out, as evidenced by the fight between the towns of Farmersville and Freedom with the developer of the Alle-Catt wind-power develpment.

â€śLocal control is (being) taken away by New York state, as happened in Farmersville and Freedom,â€ť Wiktor said, noting that state â€śsiting boards eroded local law/home rule. Thatâ€™s a scary thing when you have members outside your community making those kinds of decisions. Itâ€™s only a matter of time until the state will be the gatekeeper and weâ€™ll be dealing with a board.â€ť

Wiktor explained that the IDA has already been notified that New York State Energy Research & Development is sending out requests for proposals and requests for quotations to municipalities in the quest to set up more renewable energy development.

He said one evidence of this is Jamestown Community Collegeâ€™s comprehensive study on the potential for adding training in clean energy.