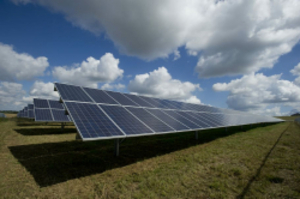 â€śWe are moving Yorktown to the frontlines of renewable energy by facilitating the installation of carbon-reducing energy devices in an intelligent and orderly fashion,â€ť said Supervisor Matt Slater. â€śReducing Yorktownâ€™s carbon footprint is critical as we face increasingly violent storms that scientists tell us are caused by global warming. We all have a role to play in reducing our greenhouse gas emissions.â€ť

Yorktownâ€™s actions align with the 2015 New York State Energy Plan, whose goals include a 40% reduction in greenhouse gas emissions from 1990 levels and 50% energy generation from renewable sources.

“Yorktown is leading the way on renewable energy and storage systems,â€ť said Julie Tighe, President of the New York League of Conservation Voters. â€śAs we head towards Climate Week, we need more communities like Yorktown to implement policies like these that reduce their carbon footprint and slash emissions. NYLCV commends Yorktown Supervisor Matt Slater for his leadership.”

Both renewable energy and energy storage systems are viewed as cornerstones for microgrids. Â New York State began investing in microgrids in 2015 by launching the stateâ€™s $40 million energy competition, NY Prize, which focused on proposals.

Swarnav Pujari, chairman of Yorktownâ€™s Climate Smart Communities Task Force, cheered the passage of both pieces of legislation saying, â€śThis was a collaborative process which the Climate Smart Communities Task Force was proud to participate in. Yorktown now stands as a leader on renewable energy while ensuring that the integrity of our neighborhoods stay intact.â€ť

Prior to the lawsâ€™ adoption, the Town of Yorktownâ€™s code did not provide a method of approving or disapproving of solar projects other than roof mounted solar panels. The Town Board has been presented with several solar projects that required the new solar laws, including IBMâ€™s Solar Carport, and a similar proposal at the Granite Knolls Sports Complex, which could potentially generate revenue for the Town.

Town Board members noted that all of Yorktownâ€™s environmental and land-use ordinances still apply to proposed solar array projects.

â€śThis is not anybody can do whatever they want,â€ť said councilman Vishnu Patel. â€śWe are going through the same process.â€ť