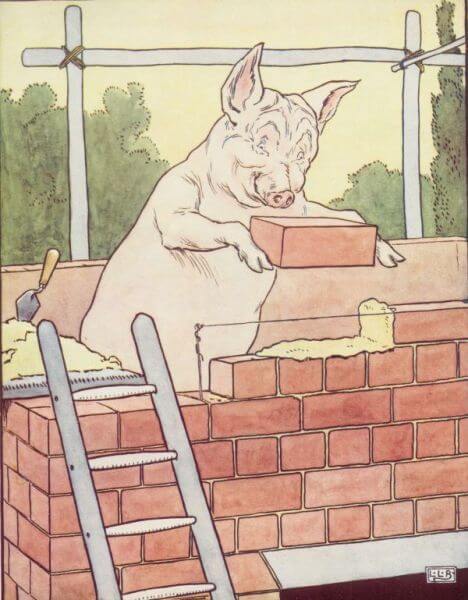 When you were a child, you probably did not realize what must be obvious to you now: the story is really about the importance of building codes. Shoddy construction brings nothing but grief, as the little pigs learned, and in the end it costs you more than if you had used high-quality materials right from the start.Â

The story is silent on whether our young porcine heroes also concerned themselves with the energy performance of their house, but it stands to reason they would have taken an interest in the U factors of windows and the R values of wall and ceiling insulation. Their experience with tropical storm-force wolf breath would have given them an appreciation for the snuggest possible construction. Possibly they even went on to put solar panels on their roof and an electric vehicle in the garage, but on this we can only speculate.Â

I bring up this story now because Virginia is in the final stages of adopting an update to its residential building code, a process the Board of Housing and Community Development undertakes every three years. In addition to ensuring the safety of wiring and plumbing and so forth, the Uniform Statewide Building Code sets standards that determine whether a new home is drafty and expensive to heat and cool, or will be comfortable, healthy and frugal with energy.Â

Remarkably, the board is currently proposing to continue outdated efficiency standards dating back years instead of adopting the more energy-saving provisions of the latest International Energy Conservation Code (IECC), or even going beyond the IECC to Earth Craft or Passive House standards.Â

In spite of the global pretentions of its name, the IECC is a national standard. Virginia law specifically instructs the board to refer to the IECC in adopting provisions that permit buildings to be constructed at least cost â€śconsistent with recognized standards of health, safety, energy conservation and water conservation.â€ť The code suggests that the board may go beyond the IECC for purposes of health and safety, but should not fall short of its standards.Â

So why is the board proposing lower standards? As far as we know, there is no wolf lobby advocating for flimsy homes, but there is a homebuilder lobby doing its own share of huffing and puffing â€” and Virginiaâ€™s code adoption process gives the homebuilders an outsized role in the decision-making process.Â

Better-insulated houses cost builders slightly more to build. They pass along the added costs if they can, but if buyers wonâ€™t pay more, the higher costs cut into profits. This being bad for business, builders prefer to lobby for lower standards that are cheaper to meet, insisting they have only the poor buyersâ€™ pocketbooks at heart.Â

Their argument is, if you will pardon the expression, hogwash. Research demonstrates that houses built to the highest efficiency standards save far more money on energy over time than they add to the upfront cost of the house. This becomes especially important for occupants who donâ€™t make much money and who struggle to afford utility bills.Â

The board should ignore homebuilder objections and put the needs of building occupants first. Gov. Ralph Northam made it clear with his Executive Order 43 last fall that the commonwealth is now committed to a path of clean energy and energy efficiency. Bringing energy costs down for residents is not a side effect of the energy transition, but a feature. As he noted in the order, â€śLow-income households pay proportionately more than the average household for energy costs and often experience negative long-term effects on their health and welfare.â€ťÂ

The climate crisis also makes it urgent that we use building codes to reduce our fossil fuel use. The Virginia Clean Economy Act will transition the electric sector to clean energy, but it does not require buildings to become more efficient. This is a problem because buildings represent 40 percent of all energy useÂ and houses typically last between 40 and 100 years.

Some retrofits can be made later, at higher cost, but the cheapest and simplest approach is to build houses snugly to begin with. They should also be sited with solar in mind and have wiring in place to make solar easy. Ultimately (and â€śultimatelyâ€ť has got to be pretty darn soon), we have to start building homes that produce as much energy as they use.Â

The board is accepting comments on its proposal through June 26. The Sierra Club has set up a webpage to forward comments urging the board to adopt high efficiency standards.Â