The Outside Story: New England’s only lizard, the five-lined skink – eagletimes.com 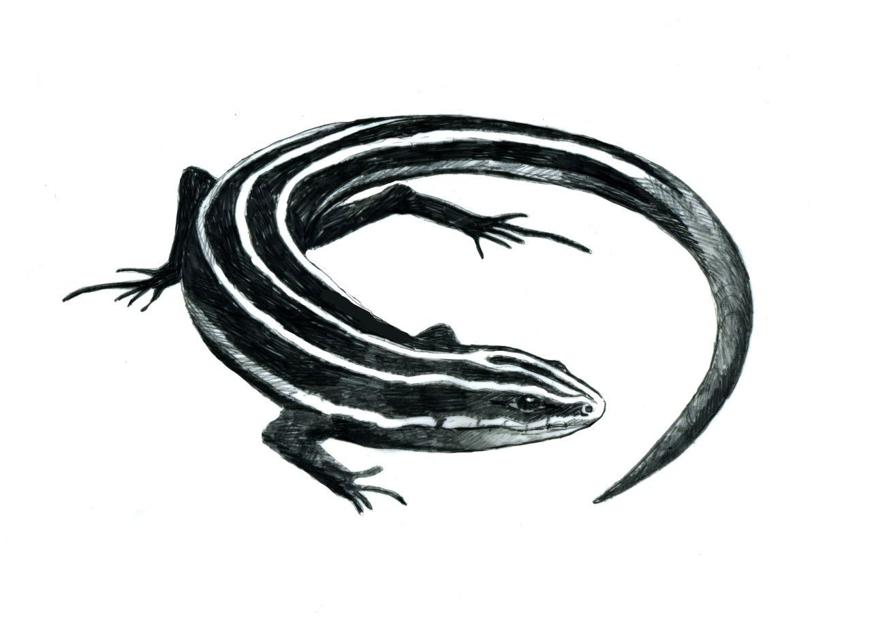 New England is home to dozens of species of mammals, hundreds of varieties of birds, and tens of thousands of different insects, but only one lizard: the five-lined skink. Though I am fond of reptiles and often seek them out, I have never seen a skink. Unless youâ€™re lucky, determined, or a rock climber â€“ or some combination of the three â€“ Iâ€™m betting you havenâ€™t, either, at least not in our neck of the woods.

These shiny-scaled, fleet-footed lizards measure from 5 to 8-1/2 inches long and are most active in New England from April through early October. Juveniles and adult females are recognizable by the five cream-colored stripes running the length of their bodies. Young skinks also have electric blue tails, which fade to gray as they age. Older males retain only the faintest trace of their eponymous stripes, morphing instead into a uniform olive-brown, though they do sport reddish chins during the spring courtship season (ooh la la).

Five-lined skinks dine primarily on insects, including crickets, grasshoppers and beetles. To the delight of one Vermont kayaker â€“ who witnessed a skink leaping from lily pad to lily pad before launching itself directly into their boat, no doubt in hot pursuit of a meal â€“ they also eat mayflies, dragonflies and other arthropods fond of freshwater.

While skinks are widespread throughout the Southeast, where they can be found in almost any woodland, in the Northeast, theyâ€™re limited to rocky summits, talus slopes and exposed ledges, typically near large bodies of water. They donâ€™t exist at all in New Hampshire, Maine or Massachusetts, and the entire known population of Vermont skinks occurs at just a handful of sites in two towns, almost all within one mile of Lake Champlain. In Connecticut, skinks eke out a living in four distinct, disconnected, ledgey areas in the western part of the state, including bluffs overlooking the Housatonic River.

Youâ€™re somewhat more likely to encounter a five-lined skink in New York, where they live in the Hudson Highlands, along the Taconic Ridge, in mountainous areas near Lake George and on the western shores of Lake Champlain. Remarkably, though southwestern New England is generally considered the northern limit of their range, they also occur in Ontario.

How can a creature so commonplace in forests from Texas to Virginia be such a rarity north of New York City? The answer, of course, lies in the chill of New England winters and in the length of time it takes to grow and incubate eggs when, like all reptiles, skinksâ€™ body temperature mirrors that of their surroundings. South-facing talus slopes function much like solar panels, absorbing and retaining enough heat to grant a two-week â€śthermal extensionâ€ť each spring and fall. They also provide deep crevices in which to wait out the winter.

Could rising temperatures associated with climate change prompt New Englandâ€™s skinks to move beyond these rocky haunts? Jim Andrews, director of the Vermont Reptile & Amphibian Atlas Project, doesnâ€™t think so. In Vermont, the talus slopes where skinks persist are largely bounded by agricultural fields, which represent a significant barrier to movement for a species that needs sun-soaked rock and protective nooks and crannies to survive.

Andrews does, however, offer one idea for how skinks could colonize new areas in an ever-warming world, and it involves shrink wrap, long-distance hiking, and temperatures so high that the lizards no longer require the thermal refuge provided by hotter-than-anywhere-else-in-the-state microhabitats.

Let me explain. Occasionally, Andrews receives reports of five-lined skinks found outside their usual range. Theyâ€™re almost always near boat launches, though two originated from sites along the Appalachian Trail. Apparently, skinks sometimes stow away in boats or RVs shrink-wrapped for travel or winter storage and coming from the South, where this species is far more common. The shrink wrap is important, because it provides an added layer of warmth and protection for the interstate journey. Along the AT, one can only imagine the skinks hitched a ride, perhaps even as eggs, in the backpack of a northbound through-hiker.

So far, all of these sightings involved individual lizards â€“ not breeding populations â€“ and itâ€™s unlikely any of them survived their first Vermont winter without a toasty, south-facing rock slope to call home. Fifty years from now, when climate change has tempered winterâ€™s bite, will this still be true?

Brett Amy Thelen is Harris Center for Conservation Education Science Director in Hancock, New Hampshire. The Outside Story is assigned and edited by Northern Woodlands magazine and sponsored by the Wellborn Ecology Fund of New Hampshire Charitable Foundation.