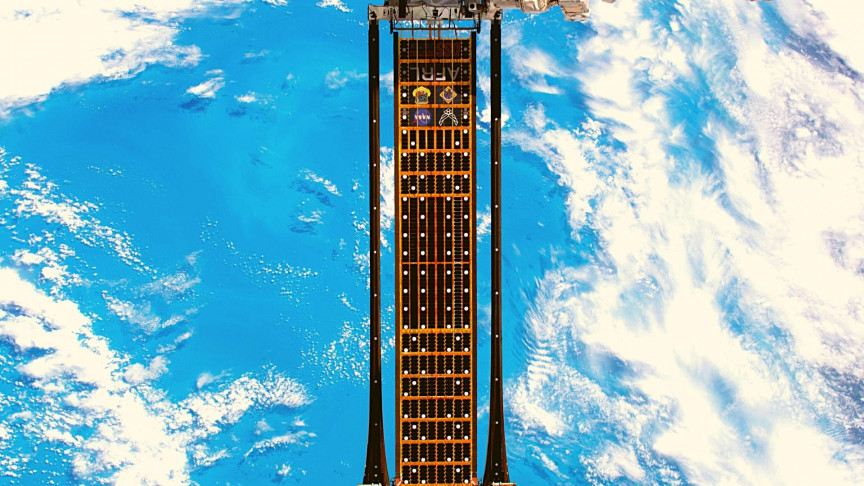 The next phase of space exploration calls for a next-level solution for power requirements. Especially when, with dozens of private firms vying for their shot at the nascent space economy, you need an optimized, sustainable energy resource with minimal costs. And we’re about to witness the first steps toward that future.

The first pair of six state-of-the-art solar arrays are going to the International Space Station as soon as next Thursday, representing the first steps in a major upgrade of the ISS’ power generative abilities, enhancing its ability to perform science experiments and commercial endeavors in near-zero gravity, according to a Tuesday press release from Redwire, the solar arrays’ developer.

“Redwire’s innovative ROSA technology will provide efficient power augmentation for the space station to enable critical research as well as utilization and commercialization,” said Redwire President and COO Andrew Rush, in the press release. “This mission underscores the importance of station’s modularity to accommodate future upgrades and the critical role commercial infrastructure plays in enabling sustainable human spaceflight.” Redwire partnered with Boeing to move forward with space operations for NASA, and will execute the design, manufacturing, design, testing, and eventual delivery of the six novel solar arrays, which will boost the power available on the ISS.

The new solar cells come from Boeing’s Spectrolab, and enable every iROSA solar array to generate more than 20 kilowatts of power, which makes for more than 120 kW of power generated, bumping up the station’s maximum power capability by 20% to 30%. The initial pair of solar arrays will be installed via a series of spacewalks, after arriving at the ISS on June 4. The final four arrays will reach the station no earlier than 2023. In addition to its compact, modular, and lightweight design, the ROSA also features a scalable solar array structure that’s developed by a subsidiary of Redwire, called Deployable Space Systems (DSS). DSS has worked on next-gen solar array technology for more than a decade, working to balance performance with affordability for a multitude of mission objectives. The technology for ROSA was first demonstrated aboard the ISS in June 2017.

As of writing, a number of modular versions of ROSA are under development for NASA’s DART mission, the Ovzon 3 GEO spacecraft for Maxar’s Legion-class satellites, Maxar’s Power and Propulsion Element for NASA’s Gateway program, along with plenty of other civilian, proprietary, and military projects. And these are only a handful of new solar-powered proposals and projects making waves in the budding space economy. Space-based solar power (SBSP) is reaching a critical threshold as a new alternative to power the world with sustainable energy. These could include the construction of gigantic mirror-like reflectors hoisted into orbit to concentrate solar energy collected from the sun, convert them into electromagnetic radiation, and beam it back to Earth in laser or microwave form.

A rectifying antenna might capture the converted energy waves and transform them into usable electricity, to be pumped into major urban electrical grids. This is why several companies have increased pressure on the U.S. government to push the nascent SBSP industry forward and form international partnerships. Senior Policy Analyst of Aerospace Corp. Center for Space Policy and Strategy James Vedda said during an October 2020 briefing that the idea of SBSP “evolved over a very long time and is probably a couple of generations away from being hooked into the terrestrial power grid,” according to a Space News report.

NASA, too, is taking solar power to new heights in space. In March, the agency announced plans to install colossal solar arrays on the moon, standing up to 32 ft (9.7 m) tall. Solar power will without a doubt become part of the backbone of generating power in space, since it is literally renewable and endless (until the sun burns out), and far cheaper than other, more potent forms of energy production currently used in space missions. And with Redwire’s iROSA solar arrays’ installation on the ISS, we’re taking the first sustainable step into the future of power generation in space.