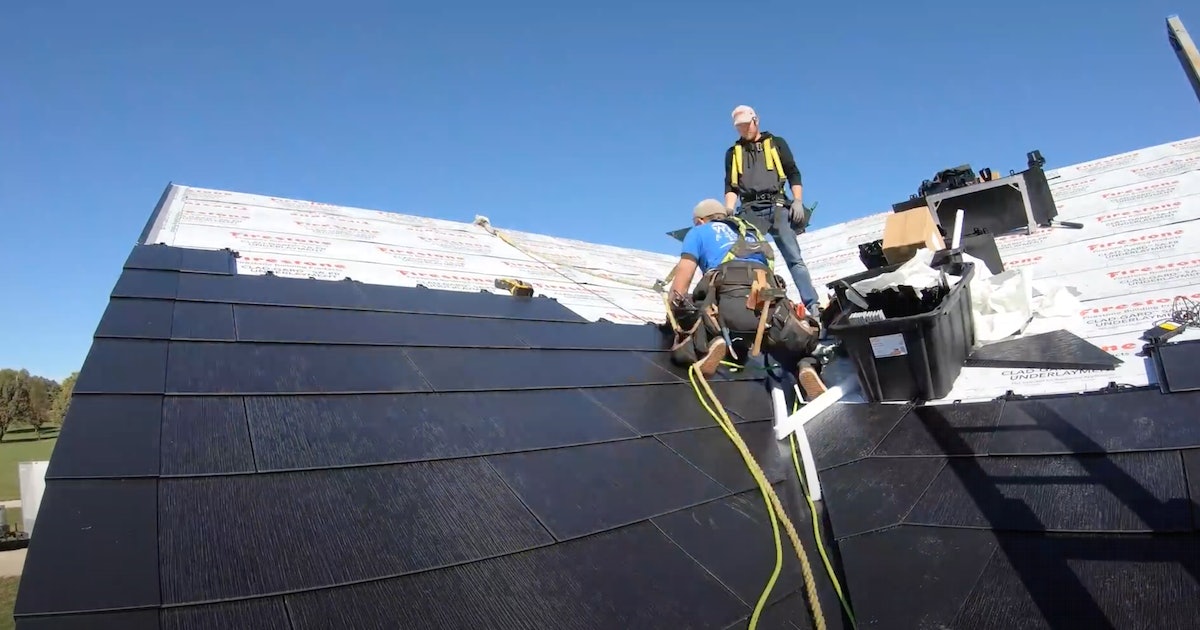 A new video shows the Tesla Solar Roof being installed at incredible speed.

But it is not as fast as the ambitious electric-vehicle company would like.

In a one-minute video, shared by Tesla’s official Twitter account and CEO Elon Musk over the weekend, the company showcases the four-day installation of a 15-kilowatt solar roof on a house. The 4,000 square-foot roof, completed by Weddle and Sons Roofing, was installed on a house in Auburn, Kansas.

The video demonstrates the install speed of one of Tesla’s most fascinating products, which offers solar panels made to look like regular roof tiles. Weddle and Sons Roofing lists itself as a certified Solar Roof installer for Kansas, Colorado, and Nebraska, plus areas of Missouri, Iowa, and Oklahoma.

The certification program is part of an effort to get the roof installed on more houses, basically letting third parties do the install instead of Tesla. Electrek reported last month that Good Faith Energy in the Dallas-Fort Worth Area and Sunpro in the South have also been certified.

Weddle and Sons can install it fast, but what’s the end result like?

The roof was first unveiled in October 2016 at a “House of the Future” event: Musk explained how the roof could charge up a Powerwall home battery and provide 24-hour clean energy for the household. A Tesla Model 3 electric car in the garage provided zero-emissions transport. In August 2017, Musk revealed both he and chief technology officer JB Straubel had installed the roof on their homes.

It’s been a slow rollout. After a smattering of installs in California in early 2018, Musk explained at a March 2019 event that the company had struggled to roll out the roof because it had diverted resources to the new Model 3 car. Early responses were positive: Amanda Tobler, one of the first to receive a roof, told Inverse in May 2018 that she “wouldn’t hesitate to do it again.”

In October 2019, Musk unveiled a third-generation roof tile. This larger tile, 15 by 45 inches, was redesigned for speedier installs. While Tobler’s roof took three weeks to install, Musk claimed the company would aim to install the new roofs in just eight hours. It also planned to reach an install rate of 1,000 roofs per week.

Weddle and Sons are part of this new initiative. Musk explained at the October 2019 event that it would work with third-party installers to speed up the process. This was a marked difference from how it sells cars, where it skips third-party dealerships in favor of its own stores.

The Inverse analysis â€“ The Weddle and Sons video suggests the new approach is paying off. The new rollout hasn’t been completely smooth: Electrek reported this month about a Florida installation that took over two months. But if Tesla can work with third parties to finally reach the promised eight-hour speeds, it could mean the firm meets its goal of 1,000 installs per week.