The US residential solar industry appears to be back on track after years of turbulence. While residential solar adoption is becoming increasingly popular, major companies are still struggling to survive. The questionable validity of certain business models has only made the future prospects of these companies more murky. The decline of the once-dominant SolarCity is a reminder of the uncertainty surrounding in the industry.

SolarCity helped popularize long-term residential solar product such as PPAs, leases, loans, etc. Given that such a business model requires a heavy amount of financing, only larger companies could competitively utilize this model. Unsurprisingly, this model greatly boosted US residential solar growth as customers no longer had to spend thousands or tens of thousands of dollars outright buying residential systems. Instead, customers could buy just the electricity produced by their system in the case a PPA or slowly pay off the system in the case of a loan.

Much of Sunnova’s business model also revolves around these long-term solar products. In fact, Sunnova even offers plans that last up to 25 years. While such a business model appears ingenious given how expensive residential solar systems are, this model comes with many problems. The industry as a whole really has no idea how such long-term products will play out decades down the line. The general energy landscape could be entirely different in decades’ time especially considering the major shifts taking place today.

Solar technology, in particular, is advancing at an extremely rapid rate. Such rapid technological change could be devastating for companies overly reliant on long-term solar products. If solar technology continues to become cheaper and more aesthetically pleasing, customers trapped in long-term solar agreements will likely become increasingly disgruntled with their older systems. This could cause default rates to increase over time as some customers may no longer want to pay for their older systems. In addition, houses with these long-term solar products attached will likely become harder to sell.

Sunnova estimates that its net contracted customer value stands at $846 million and $1.125 billion at a discount rate of 6% and 4% respectively. If these estimates are anywhere near accurate, Sunnova appears to be incredibly undervalued at its current valuation of $970 million (especially considering that the company is growing at a ~30% growth rate). As such, the market has clearly priced in many of the uncertainties surrounding long-term solar products. Even still, the market is likely still underestimating the potential problems with such products. Evaluating net contracted customer value at a discount rate of even 8% could be overly optimistic at this point in time. 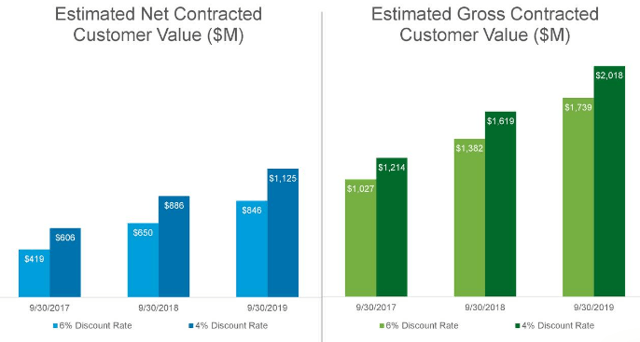 The US residential solar industry has undergone a tremendous amount of change over the past decade. With the technological advancements occurring in solar, the industry will likely continue to transform rapidly. Sunnova has done a decent job of staying on top of these changes by adopting promising technologies like energy storage.

There are many differences in housing structures, weather patterns, regulations, etc. among regions across the US, which means that utilizing local dealers may be a more efficient strategy. There needs to be a higher degree of regional specialization when the differences among residential rooftops can be quite significant. As can be seen below, a rooftop solar project involves many factors such as rooftops shape, size, shading, etc. Even houses in close proximity can have wildly varying rooftops. 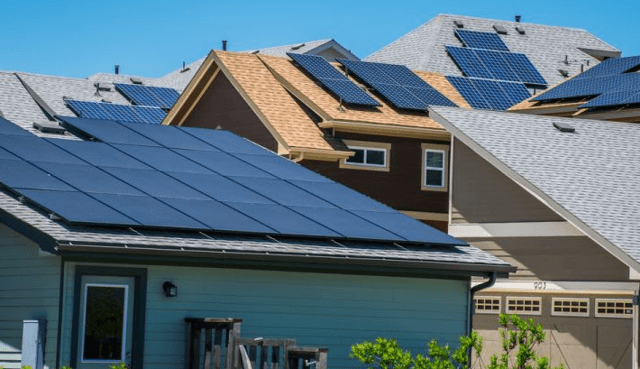 While Sunnova is better positioned than many competitors like Vivint Solar (VSLR) or Sunrun (RUN), Sunnova is still utilizing a questionable business model. If default rates and customer satisfaction remain relatively stable in the long term for products like leases and PPAs, Sunnova could see its valuation skyrocket. However, if default rates begin to increase over time as a result of changing industry conditions and increased customer dissatisfaction, Sunnova’s long-term solar products could be close to worthless.

The industry as a whole still does not have a grasp on the most stable long-term business model. Even Tesla is having severe difficulties popularizing its highly hyped Solar Roof product. The fact that the company revolutionizing electric vehicles and battery technology is having trouble on the residential solar front is telling. As a smaller and less well-funded company, Sunnova faces even more obstacles.

At the moment, Sunnova appears to be cheap at $970 million. Much of the risks involved in the company have already been priced in. Still, it is far too early to tell how Sunnova’s long-term solar products will perform without more data. It may be a good idea for investors to stay on the sidelines for now.

Disclosure: I/we have no positions in any stocks mentioned, and no plans to initiate any positions within the next 72 hours. I wrote this article myself, and it expresses my own opinions. I am not receiving compensation for it (other than from Seeking Alpha). I have no business relationship with any company whose stock is mentioned in this article.