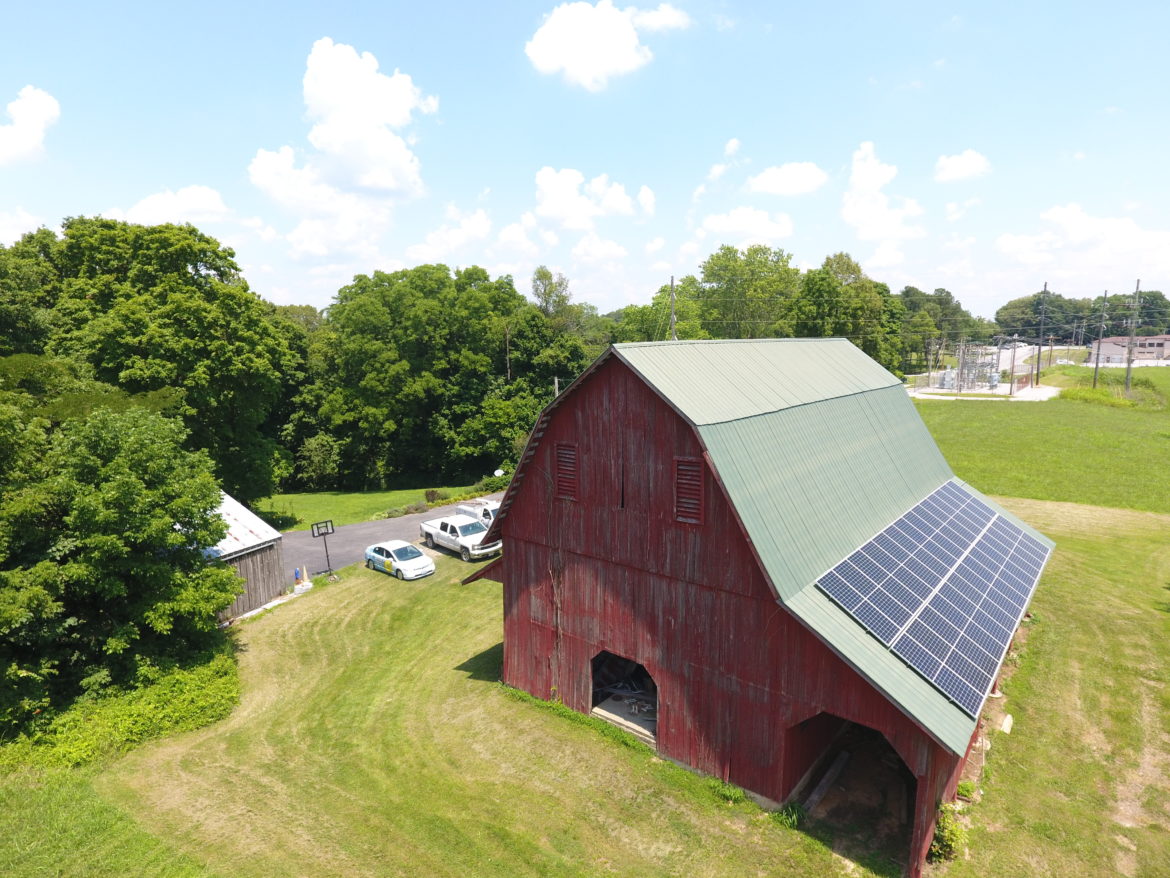 A barn with solar panels installed by Shariff Shakir’s company.

Ameren Illinois says solar capacity has reached the threshold where state law says net metering should be phased out.

In the heart of downstate Illinois coal country, Shariff Shakir watched solar energy blossom in recent years, including his company‚Äôs installations on homes, barns, fields and a fitness club.¬†

That vibrancy is in jeopardy, though, as utility Ameren Illinois moves to stop fully compensating new solar customers for surplus electricity sent back to the grid ‚ÄĒ an important income stream for homeowners and businesses financing solar installations.¬†

The 2017 Future Energy Jobs Act was a boon to solar overall, but it also included a phase-out of net metering as many know it. The state law allows utilities to stop fully crediting customers for unused electricity they generate when distributed solar penetration reaches 5% of total peak demand during the previous year.¬†

But there‚Äôs been confusion and controversy over the way that threshold is calculated, and solar developers like Shakir say they had little warning or certainty about the change, making it hard to serve their customers.¬†

‚ÄúWe had to go back and tell clients, ‚ÄėHey, you may not get the net metering we sold you,‚Äô‚ÄĚ said Shakir, sales manager for AES Solar.¬†

Will Kenworthy, Midwest regulatory director of the advocacy group Vote Solar, said that the way solar penetration is usually calculated, it currently represents just over 1% of total peak demand in Ameren‚Äôs territory. The Illinois Commerce Commission has opened a new docket to examine the calculations, and solar advocates are asking Ameren Illinois to delay changes until the process can play out.¬†

‚ÄúWe‚Äôre confident [Ameren‚Äôs] interpretation of the calculation is incorrect,‚ÄĚ Kenworthy said. ‚ÄúWhen we get through this new docket, we‚Äôre hopeful the calculation methodology will end up back in a more rational place where we have time to deal with this in a robust way.‚ÄĚ¬†¬†

Meanwhile, Ameren Illinois officials said the solar advocates are the ones with faulty math, and the company has gained approval from the Illinois Commerce Commission for its net metering plans during various stages since 2017, including last spring when it announced solar was at 3% penetration.¬†

After the 3% announcement, solar advocacy groups filed a challenge arguing that the law is not clear enough on how solar penetration should be calculated. The Illinois Commerce Commission denied an emergency motion by advocates seeking to halt Ameren‚Äôs changes.

A press release from the commission ‚Äúurged Ameren to continue to provide full net metering credits to residential solar customers until an audit is completed to protect consumers and avoid disruptions to the solar market.‚ÄĚ

In an Oct. 2 letter, Ameren essentially told the commission it will not comply: ‚ÄúAmeren Illinois has determined that it cannot undertake what the commission urges.‚ÄĚ Ameren argued that complying with the commission‚Äôs request would mean violating the law.

‚ÄúThe law gives us no discretion,‚ÄĚ said Matthew Tomc, director and assistant general counsel of the Illinois regulatory team for the utility.¬†

Illinois Commerce Commission Chair Carrie K. Zalewski, meanwhile, said that Ameren Illinois would be violating the ‚Äúlegislature‚Äôs intent‚ÄĚ if it proceeds with the change without commission approval. She noted that Ameren does not yet have approval to implement a rebate that is meant to help compensate customers with solar once net metering is changed. Solar advocates say the rebate plan is also problematic, since it is based on a customer‚Äôs location and hence raises concerns about equity. Blessing said the rebate will represent the full value that solar in any given place provides to the system, and that it is not meant to replace the amount customers with solar were getting under full net metering.¬†

Blessing said that continuing to allow full net metering after reaching the threshold described in the law is unfair to other customers, who pay more to keep up the grid when those with solar pay less.¬†

Full net metering ‚Äúwas put in place as an incentive to get the rooftop solar process started in Illinois, it was known to be a subsidy, and that subsidy frankly is paid by the rest of our customers,‚ÄĚ he said.¬†

Shakir said solar developers know net metering as they know it will end eventually, but the economics of solar are still such that many people cannot get solar without it.¬†

‚ÄúThe people it impacts most are the people shopping for solar right now ‚ÄĒ they don‚Äôt know what they‚Äôre going to get,‚ÄĚ Shakir said, noting that the uncertainty is compounded by the fact that funding for state-run solar incentives is nearly depleted, and it‚Äôs unclear if legislation will be passed to free up more.¬†

‚ÄúSomeone‚Äôs trying to make a financial decision with all these unknowns ‚ÄĒ I can‚Äôt even model it for them. It‚Äôs really unfortunate this wasn‚Äôt a cleaner, more transparent process. Regardless of what the outcome ends up being, there has been a lot of damage.‚ÄĚ¬†

Illinoisans who filed comments in the docket noted that they would not have been able to afford their solar systems without net metering. For example, Richard Ellerbrake commented: ‚ÄúThe only way that we could afford to install solar panels on our homestead years ago was because of net metering. Without net metering, it would not have been economic at all. The same is true today. Our 24.65 kWh ground mounted system has served us well, and has taken the edge off Ameren‚Äôs need to purchase electricity on the hottest days because that‚Äôs when we are sending energy back to their grid.‚ÄĚ

Nate Strickler in a comment said that he has a solar installation under contract, but Ameren has thrown its financial viability in doubt.¬†

‚ÄúIn effect, Ameren is pulling a classic bait and switch,‚ÄĚ he commented. ‚ÄúIt claims that it has provided data to the [commission] and made public filings, but nevertheless surprised everyone by declaring unilaterally that it would end net metering far before it was expected to do so.‚ÄĚ

Ameren Illinois spokesperson Marcelyn Love said the utility provided its data to the commission on Oct. 9, and in filings, Ameren said that since the changes won‚Äôt take effect until Oct. 23, the commission can finish an audit.

Solar advocates argue that the commission needs more time to figure things out and that customers should not lose the opportunity for net metering in the meantime. Otherwise, ‚Äúsolar companies expect that virtually no new residential sales will occur in Ameren‚Äôs service territory until this issue is resolved,‚ÄĚ says a filing by the Environmental Law & Policy Center, Natural Resource Defense Council, Vote Solar, Solar Energy Industries Association Coalition for Community Solar Access, and the Illinois Solar Energy Association.

In calculating the 5% solar penetration in its territory, Ameren is including both distributed rooftop solar and community solar installations of up to 2 megawatts that have proliferated thanks to incentives under the 2017 Future Energy Jobs Act. Solar advocates argue that community solar should not necessarily be included in the calculations. The utility and solar advocates also disagree about what customers should be included in the total base making up peak demand.¬†

Peak demand could include only the customers that buy energy from Ameren, or the much larger number of customers who buy energy through an alternative retail electric supplier but have it delivered on the grid by Ameren. In 2018, customers buying energy from Ameren represented only 1,948 MW out of the 7,052 MW that Ameren delivered to customers, according to the Environmental Law & Policy Center. Solar advocates want the larger number of total customers to define peak load, which would mean it takes longer to reach the 5% threshold.

Ameren Illinois‚Äôs Oct. 6 filing criticizes the solar advocacy groups, saying they ‚Äúhave not explained or supported why the ‚Äėnegative impacts‚Äô to the solar industry they ‚Äėexpect‚Äô to happen will happen. The generalized allegations of harm to the solar industry are not valid bases to violate the scheme for the orderly transition of the industry. ‚Ä¶ It‚Äôs unclear how the solar companies ‚ÄĒ who should have been aware of this date given the filings and workshops that have occurred over the last three years ‚Ä¶ have planned for the transition to come.‚ÄĚ

Kenworthy and other advocates say they wish the commission had taken stronger action sooner: ‚ÄúWe could have avoided all of this in the spring if everyone had acted in the best interest of the ratepayers.‚ÄĚ

Kari has written for Midwest Energy News since January 2011. She is an author and journalist who worked for the Washington Post’s Midwest bureau from 1997 through 2009. Her work has also appeared in the New York Times, Chicago News Cooperative, Chicago Reader and other publications. Kari covers Illinois, Wisconsin and Indiana as well as environmental justice topics.