Solar power to the rescue? – DAWN.com 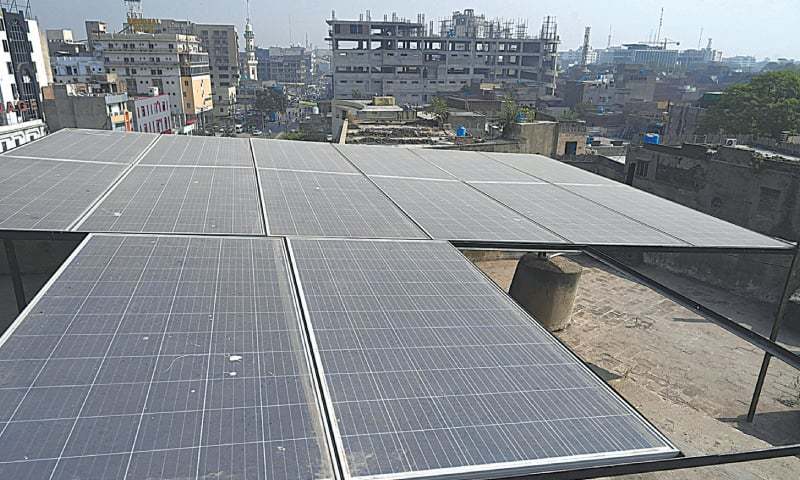 The middle-class families are quietly embracing renewable solar energy from the rooftops of their homes in Lahore. The rooftops boasting rows of solar panels in the affluent localities in major cities have become a more common sight recently as the homeowners catch up with the trend.

But this shift isn‚Äôt driven by the global concerns about rising greenhouse gas emissions or environmental degradation; the change is being steered purely by the increasing electricity prices and power cuts, which refuse to go away in spite of surplus generation capacity created in the country over the last five years.

‚ÄúI will be very happy if it helps the environment but my major concern here is our monthly electricity bill and uninterrupted power supply,‚ÄĚ smiled Irfan Ahmed, who has a solar generation system outfitted on the rooftop of his newly-constructed house in one of the housing colonies near Lahore‚Äôs Allama Iqbal International Airport. ‚ÄúI had my architect add the price of solar panels to my overall building costs before I started the construction.‚ÄĚ

Though people had started to shift to solar energy as early as the mid-2000s, as the country faced extended power cuts lasting almost half a day or more, the change was extremely slow and patchy owing to the high prices. Initially, only a few major businesses, industries and commercial concerns adopted solar power to replace their inefficient noisy generators that ran on dirty furnace oil. In the mid-2010s, more industrial, commercial and domestic consumers moved to solar power as the government pushed for on- and off-grid renewable energy.

The new alternative energy policy developed by the Alternate Energy Development Board is pushing for enhancing the share of renewables in the nation‚Äôs total energy mix from existing five per cent to 20 per cent by 2025 and to 30 per cent by 2030. The AEDB data shows it is pursuing 22 solar projects with a combined capacity of 890.8 megawatts, with six schemes having capacity of 430MW already operational in the country (this is exclusive of solar capacity added by private sector and homeowners).

‚ÄúThe real change has come only in the last couple of years after the removal of taxes on solar capacity imports,‚ÄĚ Mohammad Ramzan, a Lahore-based vendor and contractor, explained. ‚ÄúIn the last couple of years, the prices of the technology have come down substantially, making solar systems more affordable for the middle-class homeowners as well.

‚ÄúMoreover, the technology has improved over the years and become more efficient. The rooftop solar solutions cut the net electricity bills in half and protect the homeowners from upward tariff fluctuations. That is why you see so many roofs covered with solar panels.‚ÄĚ

According to Ramzan, the real push for solar shift came only after the government made the regulatory process for the approvals of net-metering licences, which allows the solar capacity purchasers the opportunity to sell surplus power they generate back to the national grid and, thus, save on operational costs, easier and quicker.

‚ÄúThis is the real breakthrough in the industry. Initially, it took months before you could get approvals from Nepra [National Electric Power Regulatory Authority] for net-metering. But now it takes a few weeks at the most and makes the electricity almost free by looping the surplus units of electricity produced during the day back into the grid.‚ÄĚ

The data published by the AEDB on its website shows that the power regulator, Nepra, has approved 6,709 net-metering licences for the generation capacity of 116.2MW of power across the country. Of these, 5,615 licence-holders have commissioned their capacity of 87.92MW. The Nepra State of the Industry 2020 report, however, says nearly 5,000 net-metering licences with 86MW electric power generation capacity have so far been issued.

‚ÄúYet the technology remains out of the reach of a majority of ordinary people. A further drop in the solar prices for the homeowners depends largely on the government policies encouraging local manufacturing of panels or fall in the technology‚Äôs international prices since the entire capacity used here is imported. Until now, the growth in the rooftop solar is mostly driven by the commercial and industrial consumers like Emporium Mall, as well as educational institutions with large tracts of land and wide roofs like the University of Engineering and Technology, which has recently installed solar systems on one of its office buildings.‚ÄĚ

The global solar market is burgeoning with countries like India, Germany, China, the US and the UK investing several hundred billions of dollars in the clean, renewable energy resource. As per the International Energy Agency‚Äôs World Energy Outlook 2020, solar energy is some 20-50 per cent cheaper today than its last year‚Äôs estimates, with the range depending on the policies designed by different countries to reduce the risk of renewable investments. The world‚Äôs best solar power schemes now offer the ‚Äúcheapest‚Ä¶ electricity in history‚ÄĚ with the technology cheaper than coal and gas in most countries, according to the report.

‚ÄúThe cost of utility scale solar power has come down to $0.035-0.040 a unit, depending on the size of investment and loan amortisation period. It can further be reduced by increasing the tenure of loans,‚ÄĚ Almas Hyder, who has set up a small solar power project in southern Punjab, said.

The present solar electricity prices compare with $0.17 a unit in 2015 when the Punjab government installed its first 100MW scheme in Bahawalpur.

‚ÄúGiven the fact that we have ample free sunshine across the country throughout the year, we can lead the world in solar power output. For that to happen the government must encourage the people to switch over to solar through policy and other incentive schemes to make the equipment needed to convert this free sunshine into the cheapest and cleanest energy,‚ÄĚ concluded Almas.