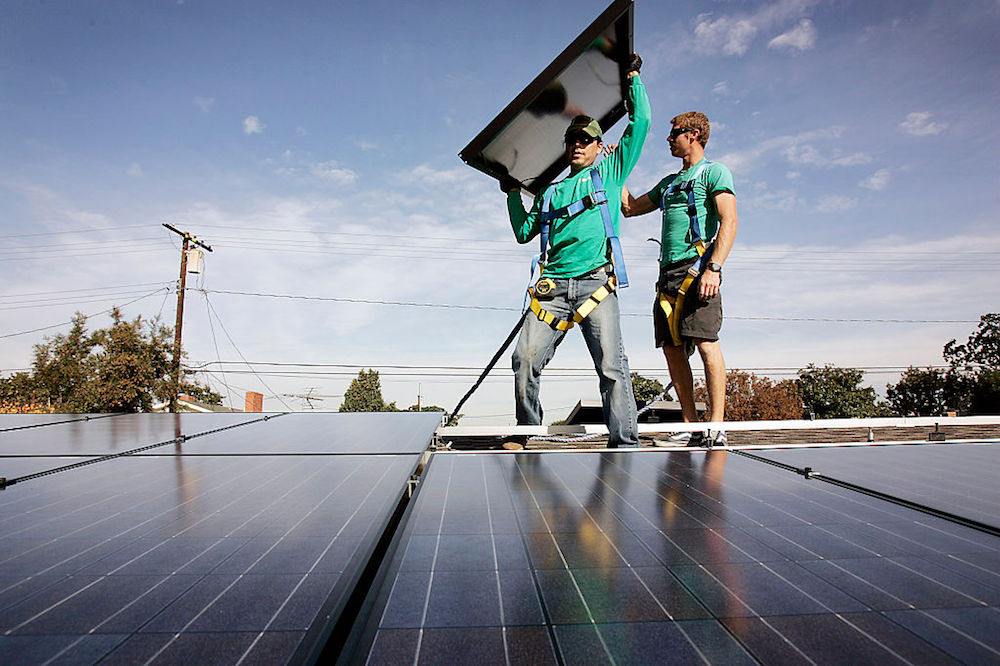 It was about a decade ago that Boston resident Natalie Jones first began to dream of putting solar panels on her roof. She was amazed, she said, that there was a technology that could help people save money and improve the environment at the same time, and she wanted to be part of it.

At the time, however, home solar was something only the affluent could afford. A modest 5-kilowatt system would have topped $30,000 in 2011, according to the National Renewable Energy Laboratory. Within a few years, prices had fallen and solar companies were making aggressive sales pitches in her neighborhood. Still, the numbers didn’t work for Jones, who was a full-time student working as an educator in a women’s homeless shelter.

“I couldn’t lay down thousands of dollars for the panels,” she said. “I couldn’t get in the game with a big check.”

Get Talk Poverty In Your Inbox

Thanks for Signing Up!

Then one day, at a community event, she ran into representatives from Resonant Energy, a Boston-based solar developer that focuses on projects in low-income areas. Resonant’s staff understood both Jones’ passion for solar and her financial challenges. They introduced her to the Massachusetts Solar Loan, a program that financed residential solar projects, and offered lower-income borrowers fixed, below-market rates and forgiveness of 30 percent of the loan principal.

The solar panels on Jones’ home went up in October 2017 and she hasn’t had to pay an electric bill since the following April. Though her bill was less than $100 – lower than the state average of $126 – the savings have made it easy to afford her monthly solar loan payment of $127.

“When I got my solar panels I just felt like I won the lottery,” she said. “I found it to be very empowering.”

In Massachusetts, the average household spends 3 percent of its income on energy costs, while households with income between 30 percent and 60 percent of the area median — roughly between $32,000 and $64,000 for a family of three — spend 7 percent. For families living below the poverty line, this energy burden jumps to 21 percent.

Solar power could decrease those costs. For renters or homeowners who can’t install solar, community-shared solar — larger developments that sell power to multiple users — can help lower the cost of energy by a few hundred dollars each year. For homeowners who install their own systems, the savings will generally pay off the price in around five or six years. After that, all future savings are pure financial benefit.

These savings could make a meaningful difference to households that routinely have to choose between paying bills and buying medication or fresh food. Nationwide, more than 20 percent of households reported foregoing food or other necessities to pay an energy bill in 2015, the latest year for which data is available from the Energy Information Administration.

So far, however, low-income solar has gotten too little traction for the effects to be realized at any scale, supporters say. These initiatives are undermined by their failure to understand the cultural, historical, and financial realities in the communities they seek to serve, a dynamic Massachusetts is grappling with right now.

The state’s solar targets and policies are widely considered some of the most ambitious in the country. The Solar Massachusetts Renewable Target program, or SMART, recently expanded to provide incentives for 3,200 megawatts of solar development, a number that could power more than 300,000 average households. This expansion will more than double the state’s installed solar capacity.

The program pays the owners of solar generation units — anyone from private homeowners with a few panels on their roofs to large-sale solar farms — a set rate per kilowatt-hour of energy produced. The base rate depends on size and location, and increases slightly when the project includes features the state wishes to encourage, such as reclaiming a polluted site or serving low-income customers. The original base rates ranged from 15.6 cents to 35.8 cents, though they have, by design, dropped as more projects have signed up for the incentive.

There is also often an ingrained distrust of salespeople peddling energy deals.

Though the program includes incentives to encourage developments in low-income neighborhoods, there has been little progress toward this goal since SMART launched in November 2018: Just 4.7 percent of the capacity approved by the program as of late November 2020 has been for low-income projects. According to Ben Underwood, co-founder of Resonant Energy, that’s partially because the incentive doesn’t offer enough money to attract developers, whose main goal is to make a profit: It’s much more lucrative to build solar generation units on open land. At the federal level, a renewable energy tax credit can lower the net cost of a solar installation, but doesn’t make it easier for lower-income consumers to afford the upfront price.

However, the barriers go beyond the purely financial. “A lot of states focus on the monetary barriers,” said Nathan Phelps, regulatory director for clean energy advocacy group Vote Solar. “That doesn’t actually address all of the underlying issues.”

One major stumbling block is the current requirement that low-income solar customers buying energy from community shared systems — the main way renters or homeowners with unsuitable roofs access renewable energy — sign a contract. With a contract on their financial report, it may be more difficult for them to secure a car loan or other needed credit, Phelps said. The decision to go solar therefore becomes another hard choice, rather than an obvious financial boost.

In these communities, there is also often an ingrained distrust of salespeople peddling energy deals. For many years, competitive power suppliers preyed on low-income and minority neighborhoods in the state, promising low electricity prices and hiding expensive loopholes in the fine print. Low-income households often lost hundreds of dollars a year, to the tune of $57 million from 2015 to 2018, reports by state attorney general Maura Healey found. Today, many members of these communities are understandably wary when outsiders show up offering contracts for energy savings.

Environmental justice and clean energy activists are lobbying to change the system, allowing a simplified, no-contract form of payment that will avoid these concerns. So far, the state’s Department of Energy and the Environment, which oversees SMART, has not committed to such a change. Some in the industry, however, say there are hopeful signs that the state will soon start allowing smaller projects to go ahead without contracts.

“We need to provide benefits to people who live in environmental justice communities, then engage them to help us write the next policy,” Underwood said. “There’s something inherently democratic about solar and it is very important for us in crafting policy to make the most of that potential every step of the way.”