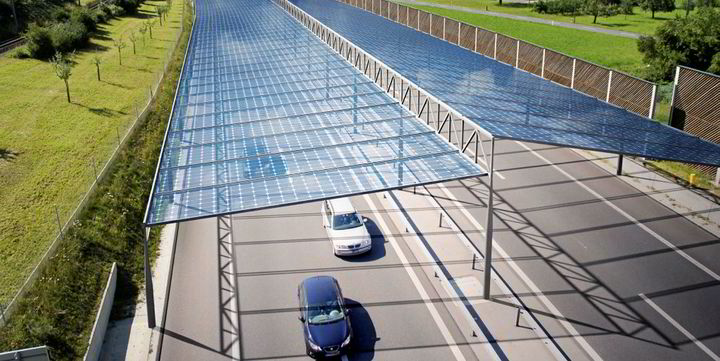 Germanyâ€™s Autobahn, the countryâ€™s network of high-speed highways, enjoy a near-mythological status â€“ not least for having inspired the synthesizer beat-laden 1974 album by electro-pop band Kraftwerk that is considered by many as the birth of techno music.

The Autobahn is a magnet for speed-freak petrolheads who â€“ unlike anywhere else in the world â€“ can drive as fast as they like here. But speeding also massively increases CO2 emissions, turning the highways of the country home to the Energiewende (energy transition) into a climate problem case.

Now German and Austrian researchers are trying to find out how the dense Autobahn network that covers 2.6% of the overall area of Germany, could instead switch gears to help the environment.

A three-year long project has started to assess whether canopies covering stretches of the Autobahn could be fitted with solar power systems and so contribute to the energy transition in Germany.

The theoretical potential is tremendous. Considering all 13,000km of the Autobahn network, assuming a width of 24 metres of a standard four-lane highway, and using PV panels with a capacity of 180 watts per square meter would result in a capacity of 56GW â€“ more than the 49GW in blacktop Germany had installed at the end of last year.

This much PV canopy would produce some 47TWh of clean energy per year, according to Martin Heinrich, head of the PV module products team at Germanyâ€™s Fraunhofer Institute for Solar Energy Systems (ISE).

Factoring in Germanyâ€™s power consumption in 2019 that much solar power would meet up to 9% of the countryâ€™s power needs â€“ or close to a third of the electricity consumption of its private households.

Obviously, not all stretches of the Autobahn can be covered. Parts of it run through tunnels, below bridges, or in shadowy stretches that would be uneconomic for solar power production.

â€śIt is difficult for me to specify a technological potential here, even as a percentage, we have to analyse that first,â€ť Heinrich conceded to Recharge in an interview.

Beyond power production, the researchers are also working with traffic engineering company Foster Industrietechnik to see whether PV canopies would offer added value for road maintenance, by protecting the tarmac.

â€śIf there is too much moisture, snow or ice, it is not so good for streets,â€ť Heinrich explains. â€śAnd if you cover the street, you can also put PV modules directly on top and thus also have an energy yield.â€ť

The researchers now plan to build a demonstration roof on a 20-40 metre stretch of a Autobahn, probably in southern Germany, at the entrance or exit of a service area, for a one-year test programme to study energy yield and to monitor drainage, wind and snow loads, stability and impact safety, maintenance options and traffic safety.

â€śThat will be a trial object to monitor whether the things we have considered during the project phase, will actually make sense and work,â€ť Heinrich said.

The cost of building these solar canopies on the Autobahn is not entirely clear yet, but best estimates suggest they will be equal or higher than those of PV installations on private homes, which cost closet to â‚¬300/m2 ($355/m2) a square meter, and substantially more than ground-based arrays, which he estimates roughly to be â‚¬125/m2.