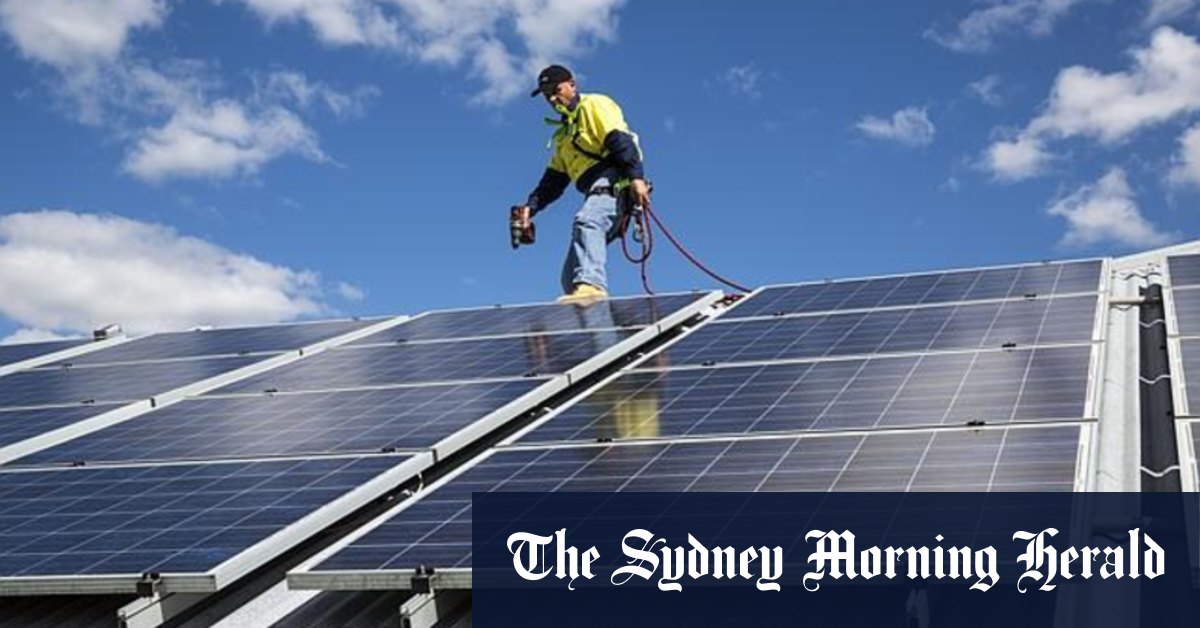 â€śPeople who are working and arenâ€™t able to spend money on restaurants or holidays have directed that money to home improvement.â€ť

Although the installation fall in Victoria was sharp, there were record highs in other states including NSW, Western Australia and South Australia.

Should the pace of the past year be maintained, Australia will by 2025 have more rooftop solar capacity than the country’s ageing fleet of coal-fired power.

An Australian renewable energy record was set last week when roof-top solar, large-scale solar and large-scale wind, with some hydro, supplied almost 53 per cent of demand on the national grid on Friday (which does not include the Northern Territory or Western Australia).

Australia has among the world’s highest penetration of rooftop solar, thanks in part to high retail power prices but also the country’s rich renewable energy resources.

Prices of panels are likely to continue to fall as producers, particularly those in China, continue to expand output. That country recently completed work on the world’s second-largest solar farm, built in just four months.

During the first Melbourne lockdown solar installation businesses were able to operate, but stage four restrictions has reduced operations to five people working on an unoccupied building site, meaning new building sites have been the priority.

â€śPeople have been housebound and decided they are going to do improvement projects,â€ť Mr Wright.

â€śIâ€™ve had feedback from some saying theyâ€™ve just got a big bill from being at home all winter and they want to save money.â€ť

The Australian Energy Market Operator, which oversees eastern Australia’s power grid, has said it expects renewables will supply as much as 90 per cent of electricity at times by 2035.

Feed-in tariffs in Victoria range from 10.3 to 14 cents per kilowatt hours.

Information on the number of solar system installations is provided by the Clean Energy Regulator.

Our weekly newsletter will deliver expert analysis of the race to the White House from our US correspondent Matthew Knott. Sign up for The Sydney Morning Herald‘s newsletter here, The Age‘s here, Brisbane Times‘ here and WAtoday‘s here.Â

Miki Perkins is a senior journalist and Environment Reporter at The Age.

« Tesla Cruise Ships: Can We Get Them Next? – CleanTechnica West African energy startup Easy Solar raises $5m Series A round to scale operations – Disrupt Africa »