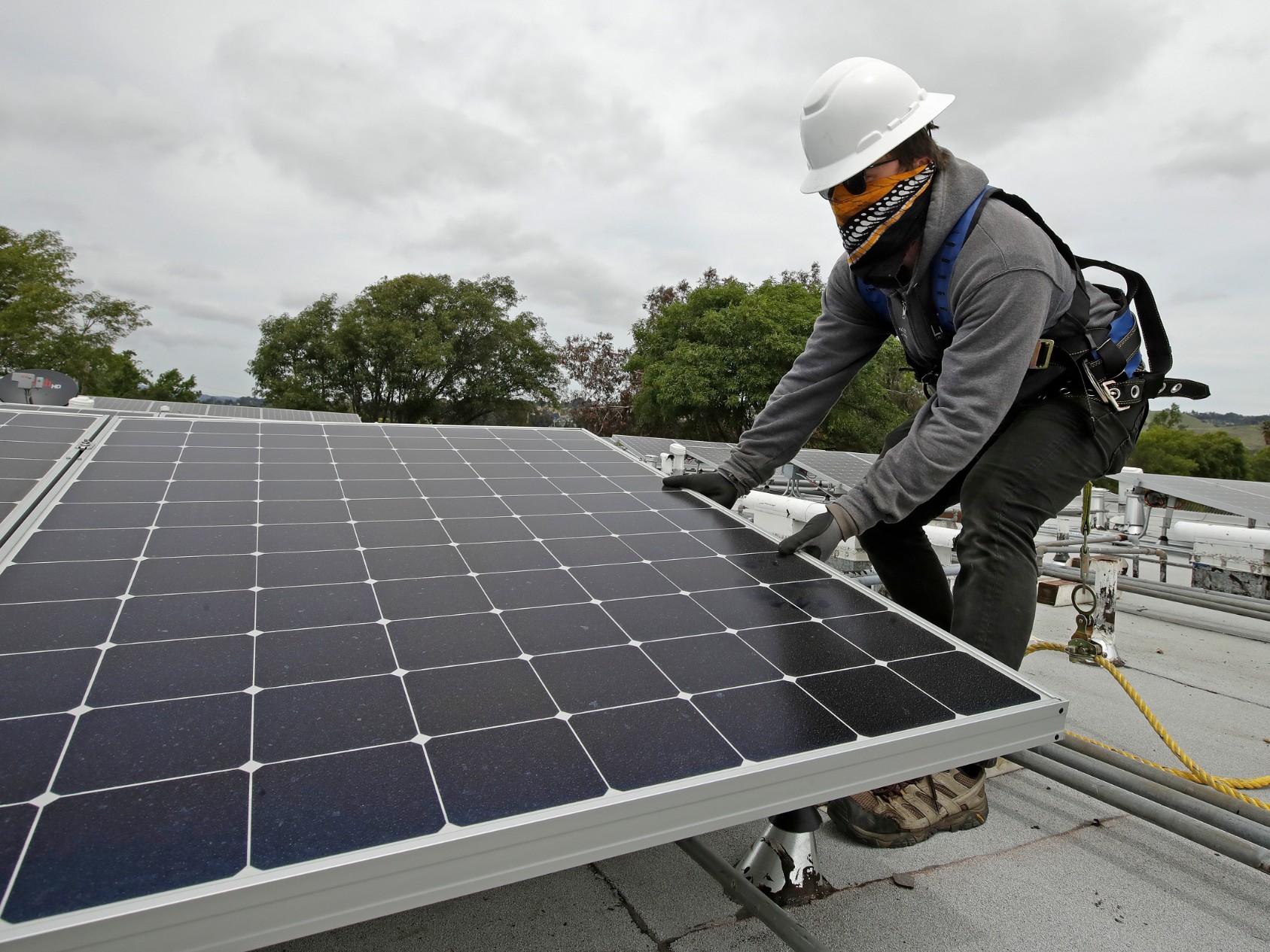 If Your Time Is Short:

But those are the allegations made by the No on Prop 15 campaign in radio and social media ads, which ask voters to reject the measure this November.¬†

‚ÄúProp 15 will impose massive property tax increases on California‚Äôs solar power facilities, meaning Prop 15 will drive up the cost of electricity for consumers like us,‚ÄĚ a narrator said in the radio spot that aired on KFBK in Sacramento in mid-September.¬†

The campaign‚Äôs Facebook ad made a nearly identical claim: ‚ÄúProp 15 will impose massive property tax increases on Solar in California.‚ÄĚ

It was flagged as part of the social media platform‚Äôs effort to combat false news and misinformation on its News Feed. (Read more about PolitiFact California‚Äôs partnership with Facebook.)

The Yes on 15 campaign also disputes the claims.

Given the importance of solar energy in California and the fast-approaching election, we decided to shine a light on the facts.¬†

If approved, Proposition 15 would be a major change to California‚Äôs historic property tax law Proposition 13, which voters passed in 1978.¬†

Specifically, the new measure would require commercial and industrial real estate worth more than $3 million to pay property tax based on current market value. Right now, owners pay a much lower tax based on the original purchase price.¬†

Residential properties would be exempt from the changes.¬†

The measure would generate billions of dollars per year to fund public schools, community colleges and local governments statewide.

How Would Proposition 15 Affect Solar?¬†

Tax and solar industry experts said there was some initial concern that Proposition 15 could affect an existing tax exclusion for commercial solar projects. They said those worries faded this summer.

Here‚Äôs how that exclusion works: Land under solar developments is still taxed, but the value of the solar arrays doesn‚Äôt add to the taxable value. California voters approved that benefit by passing Proposition 7 in 1980 to help ensure the growth of the solar industry.¬†

The Legislature has extended that benefit several times, most recently through 2024, but industry officials worried Proposition 15 might end it much earlier.¬†

So at the urging of the solar industry, the Legislature passed Senate Bill 364 at the end of August and Gov. Gavin Newsom signed it early this month. The law specifically ensures commercial solar projects retain this exclusion through 2024 whether or not Proposition 15 passes.¬†

Solar industry and tax experts say the new law protects solar projects, despite concerns raised by the California Assessors‚Äô Association that the law is unconstitutional.¬†

Ed Smeloff works with the Vote Solar Action Fund, which is the political arm of Vote Solar, a group that works to expand access to solar nationwide and pushed for SB 364.¬†

He described the claim that Proposition 15 would impose ‚Äúmassive tax increases‚ÄĚ on solar in California as a ‚Äúcompletely misleading and incorrect allegation.‚ÄĚ¬†

‚ÄúThe No on Proposition 15 campaign is completely deceptive in its statements about solar power,‚ÄĚ Smelnoff said. ‚ÄúThere is nothing in Proposition 15, when it’s combined with state legislation, that would undermine the future development of solar power.‚ÄĚ

Rick Umoff, California senior director and counsel at the Solar Energy Industries Association, or SEIA, added in a written statement that SB 364 had ‚Äúremedied‚ÄĚ his group‚Äôs early concern over Proposition 15 ‚Äúby preserving the current tax treatment for solar projects.‚ÄĚ¬†¬†

SEIA is a national trade association of more than 1,000 member companies and partners, according to its website.¬†¬†

In a letter on Sept. 9, Don Gaekle, president of the California Assessors‚Äô Association urged Newsom to veto SB 364, saying the Legislature had overstepped its authority. He added that the bill was ‚Äúcontrary to the California Constitution and sets a bad precedent for future erosions of the property tax base through legislative actions not envisioned by the Constitution.‚ÄĚ¬†¬†¬†

Specifically, Gaekle pointed to the law‚Äôs reclassification of commercial solar projects from real property to personal property to avoid any possible property tax hike under Proposition 15. He said only voters can approve such an exclusion.¬†

San Luis Obispo County Assessor Tom Bordonaro said if Proposition 15 passes, he would be presented with conflicting messages on whether to reassess commercial solar projects. He said he believes he would eventually ‚Äúbe forced to reassess‚ÄĚ them.

‚ÄúThe courts are going to have to sort it out,‚ÄĚ added Bordonaro, a former state senator and past president of CAA.¬†

Michael Bustamante, a spokesperson for the No on 15 campaign, pointed to the CAA arguments to justify the campaign‚Äôs claims about ‚Äúmassive property taxes‚ÄĚ on solar, but he declined to say whether the campaign would sue to overturn the new state law.¬†

In August, Matt Klink, another spokesperson for the No on 15 campaign, told Capital & Main that SB 364 ‚Äúwon‚Äôt provide relief to the clean energy sector, and it will be immediately challenged in court and overturned. The only way to truly protect the solar industry is by defeating Prop. 15 in November.‚ÄĚ

The campaign aired and published its ads nearly a week after Newsom signed the new law and nearly a month after the Legislature passed the bill.¬†¬†

Asked about the CAA‚Äôs legal concerns, Umoff of the solar trade association, added in a statement: ‚ÄúWe are aware of their arguments and disagree. Senate Bill 364 is constitutional.‚ÄĚ

Darien Shanske, a UC Davis law professor who specializes in taxation, wrote in an email that the No on Prop 15 claims about a massive tax hike on solar are ‚Äúmisleading.‚ÄĚ He added that the argument that SB 364 is unconstitutional ‚Äúis not a trivial argument as it turns out, but I would characterize (that argument) as more likely than not to fail.‚ÄĚ

Shanske added that the campaign ads give the impression that even residential solar projects could be subject to tax increases. ‚ÄúThat is clearly not permitted by Prop 15,‚ÄĚ he wrote.

He added that perhaps there‚Äôs an argument to be made that starting in 2025 solar projects would pay more after the state‚Äôs commercial solar property tax exemption ends. But, as others including Smelnoff noted, that exemption was going to end in 2024 regardless of Proposition 15.¬†

‚ÄúThough puffery is allowed in politics, the idea that the increase would be ‚Äėmassive‚Äô and ultimately much affect the costs of the average consumer strikes me as quite far-fetched,‚ÄĚ Shanske wrote.¬†¬†

Kirk Stark, a professor of tax law and policy at UCLA, added in email that it‚Äôs simply ‚Äúnot accurate‚ÄĚ to say Proposition 15 will lead to a ‚Äúmassive property tax increase‚ÄĚ for solar in California.¬†

Last month, Stark told Capital & Main that he‚Äôs skeptical that SB 364 would be ruled unconstitutional. ‚ÄúProp. 15 itself authorizes the legislature to decide how to implement it,‚ÄĚ he said, ‚Äúand it‚Äôs certainly possible that courts would defer to lawmakers on what is and is not subject‚ÄĚ to the proposed law.

Response From Yes On 15 Campaign

Asked about their opponents‚Äô claims, a spokesperson for the Yes On 15 campaign said ‚Äúthese false ads should be taken down immediately.”

“The corporate-backed opponents of Prop. 15 will say whatever it takes to keep their tax loopholes, but this is crossing the line,‚ÄĚ Alex Stack said in a written statement. ‚ÄúNot only are they blatantly lying to voters just weeks before ballots drop, but they are trying to take advantage of Californians’ financial struggles at a time when so many are hurting financially right now.‚ÄĚ

But the solar industry and tax experts reject that idea. That‚Äôs because California approved SB 364 this summer, protecting commercial solar projects from a property tax increase through 2024 should the measure win. A property tax exclusion unrelated to Proposition 15 is set to expire in January 2025.¬†

Not everyone agrees the new state law is on solid legal ground. The California Assessors‚Äô Association says it is unconstitutional. And the No on Proposition 15 campaign says a court could overturn it.¬†

In the end, we found the claims by the No on Prop. 15 campaign are misleading and unfounded.¬†

We rate them False.

FALSE ‚Äď The statement is not accurate.

Click here for more on the six PolitiFact ratings and how we select facts to check.

No on Prop 15, Facebook ad and radio ad, accessed September 2020

CapRadio provides a trusted source of news because of you. ¬†As a nonprofit organization, donations from people like you sustain the journalism that allows us to discover stories that are important to our audience. If you believe in what we do and support our mission, please donate today.