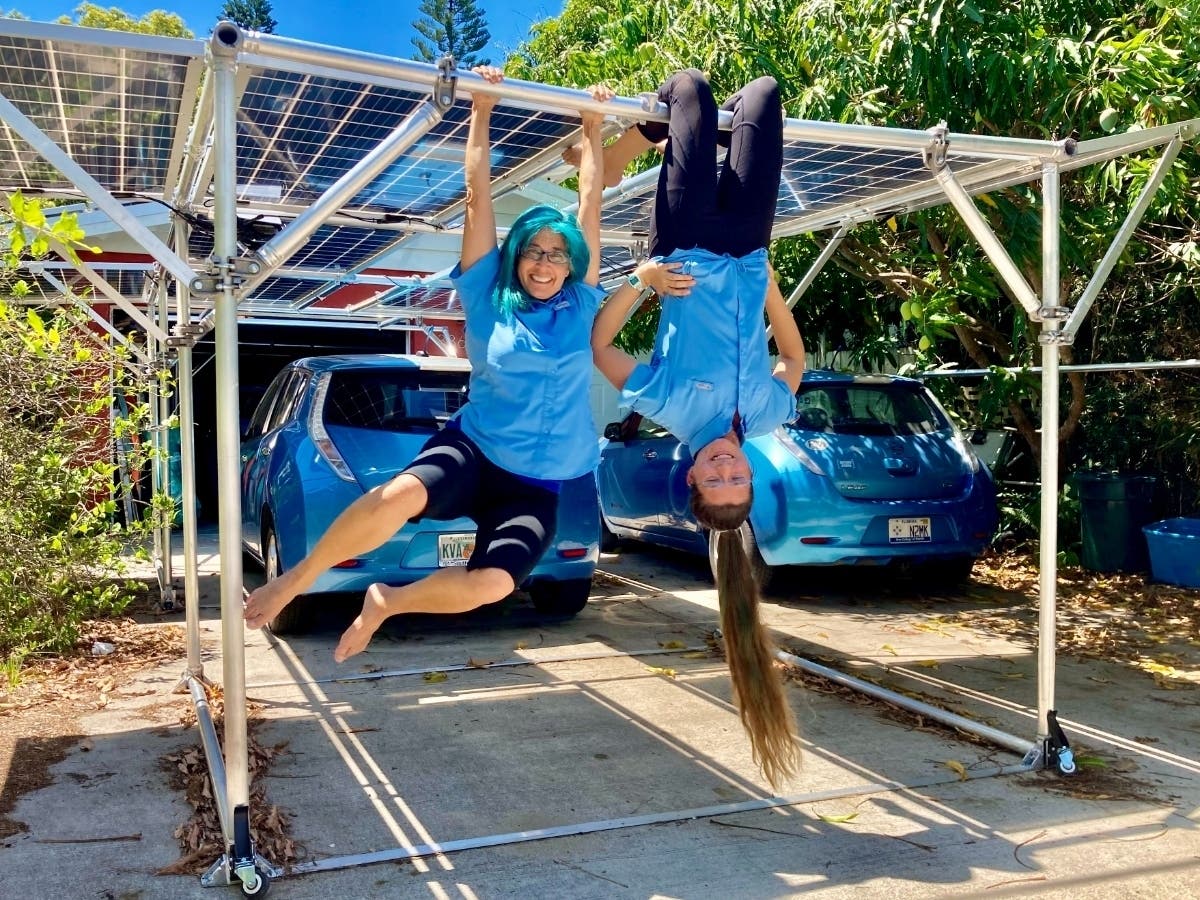 SARASOTA, FL — An invention by a New College of Florida student could revolutionize the way the average person accesses solar power.

Antonia “Toni” Ginsberg-Klemmt, a third-year physics and environmental studies student, has been recognized nationally for her patent-pending invention, GismoPower. The mobile solar carport with an integrated electric vehicle charger was one of 10 projects — out of thousands of applicants — chosen as an OZY Genius Award recipient.

The winners were announced Sunday during the virtual 2021 OZY Fest, which featured notable guest speakers such as Dr. Anthony Fauci, Mark Cuban and Malcolm Gladwell.

Ginsberg-Klemmt took home a $10,000 prize for her invention. She’ll use the funds to tweak and improve the stand-alone system. Eventually, she’ll build a solar-powered carport on New College’s campus.

With the recognition from the award, she’s also plans to use the momentum to educate people about the accessibility of solar energy and debunk common misconceptions about it, namely that it isn’t affordable, she said.

“I’m just so stoked that it’s gaining national recognition. Hopefully, this will get people thinking about and talking about renewable energy,” Ginsberg-Klemmt added.

“They’re all the same color. It’s pretty funny. We call them our blueberries,” her mother, Erika Ginsberg-Klemmt said. “If I see one on the road, I know it’s got to be one of my kids.”

An alumna of Pine View School in Sarasota, Toni opted to stay close to home after graduation, choosing to attend New College. While on campus, she realized that though there were electric charging stations near classroom and administrative buildings, there weren’t any close to the residence halls.

“Why can’t I park where other residents are?” she said. “I have to park on the other side of campus where the classrooms are.”

She also noticed after leaving classes “how insanely hot it was to get in my car after sitting in the sun for hours.”

With these two thoughts in mind — the lack of charging stations in certain areas of campus and how her car absorbed heat while parked — Toni began brainstorming solar-powered carports.

This is how GismoPower — which stands for Garage Interior Storable MOdular Photovoltaic On Wheels With Integrated EV Charger Rack — was born. She adopted the project as an independent study in January and got to work.

Like what you’re reading? Invite a friend to subscribe to free Sarasota newsletters and real-time email alerts.

During the pandemic, she learned how to TIG weld aluminum as she launched New College’s intercollegiate rowing club, New Crew, and refurbished older boats to save money. She used her newfound skills to build the prototype for GismoPower.

As a portable structure, it comes in handy in areas hit hard by hurricanes and other storms, such as Florida.

It also addresses the affordability of solar power by bypassing some of the more costly elements of installing solar panels at home: the permitting fees and contractor costs, Toni said. “The permitting cost for a stationary structure at your home is expensive. Putting the system on wheels made the entire concept a game-changer. It turned into an appliance, instead of a structure.”

As she completes her independent study next year, she’ll use the funds from the award to improve the design and eventually build a carport on campus.

Long before Toni or her two siblings were born, her parents, Erika and Achim Ginsberg-Klemmt, traveled the world in a solar-powered sailboat.

They lived on their sailboat from 1995 through about 2006 — spending some of that time cruising with their young children — when they settled in Sarasota.

Erika grew up in New Jersey before landing in Southern California and, eventually, Southern France, where she met her German husband, an electrical engineer.

“And we hopped in our sailboat and off we went,” she said. “We sailed to Tahiti, got pregnant, had two kids in Hawaii. We sailed with two kids for three years until kid number three.”

Sarasota was “a smart place to settle” and raise a family, she said, though they still have their sailboat. “She’s ready for running away.”

She’s also not surprised by Toni’s interest in renewable energy.

“Antonia is my next generation getting into it,” Erika said. “I’m proud of her. This was kind of to be expected. It’s just in our blood.”

Their family didn’t install solar panels at home until 2017, though, when then President Donald Trump withdrew the United States from the Paris Agreement on climate change.

“I said, ‘That’s it. We’re building a solar system.’ And we went for it. That’s how it all started,” Achim said.

At the time, they had an older roof and put off installing a solar panel system for several years because of its age.

“We didn’t really want to put a solar system on an old roof that had to be replaced in two or three years,” he said.

So, they installed a standing seam metal roof, which lasts 50 years — even longer than the solar panels — and he installed the panels himself.

Achim has long dreamed of producing his own power at home, so he whole heartedly embraced the project and shared his enthusiasm not only with his children, but with anyone who shows interest.

“It really has become affordable. We’ve even earned a little money,” he said. “Right now, solar panels and electronics are so cheap. The real cost for those who don’t do it themselves is the contractor and the fees. It’s really too much. It puts solar power out of the question for a lot of people… But if you do it yourself and do it right you can save a lot of money.”

As an electrical engineer, installing the system by himself was probably easier for him than it would be for most people, Achim added.

He spends his time in Facebook groups and other forums sharing his expertise and educating others on how they can install these systems themselves. He’s also taught Toni everything he knows.

The Ginsberg-Klemmts’ home has 66 rooftop photovoltaic solar panels, which has allowed them to run their entire home on solar electric over the past three years.

In fact, they produce more energy than they consume each year — so much that Florida Power & Light actually pays them every billing period — and even more than FPL allows. The utility company limits customers with solar system installations by allowing them to produce only 115 percent of their total usage.

And any home that generates more than 10KW must pay for liability insurance to ensure that it doesn’t cause damage to the power grid, Achim said.

“It’s ridiculous that you have a private company like FPL acting like a government regulatory agency,” he said. “They tell you how big your system can be, what you’re allowed to put on your home.”

He’s been battling FPL ever since he first installed his system, eventually filing a petition with the Public Service Commission against FPL for disincentivizing residential solar system through “nonsense rules and regulations,” he said.

Erika added, “I don’t think Florida knows or understands FPL is controlling or wants to control the narrative and other utilities.”

When his petition was denied, he automatically appealed it, bumping it up to the Florida Supreme Court last year. He was assigned a court-appointed, pro bono attorney, but after three weeks, the case was dismissed. Though it ultimately went nowhere, it brought some attention to the issue.

She said she understands that politics are at play when it comes to FPL and other utility companies.

“It was like David against Goliath,” she said. “My dad is just some immigrant from Germany who is now a U.S. citizen trying to fight to make solar more accessible and they’re a major corporation with political connections.”

These days, she’s just as passionate about renewable energy as her father and the pair is dedicated to fighting FPL and raising awareness about solar energy and other clean energy sources.

“We have a completely stupid system in place,” Achim said.

Their home solar system continues to generate more power than they’re allowed by FPL. He not only hopes that this will catch the attention of the utility company, he also wants them to come after him for it.

“Arrest me,” he said. “Toni and I are at a place where, just let them arrest us. Nothing else can really happen to gather attention to this really stupid situation.”

Looking toward the future with GismoPower

As a physics and environmental undergraduate, Toni plans to study the renewable energy field in regard to ocean energy — how currents and waves can generate energy, particularly in coastal areas — in graduate school.

For now, while she’s living in Florida, it made sense to set her sights on solar energy, she said. “I mean, it’s the Sunshine State, after all.”

She hopes that winning a national award for her work will raise awareness of what she’s been learning from her father all along: that more people need to turn to renewable energy.

Toni is “honored” that her project was chosen as an OZY recipient “out of thousands of people who applied, and all these genius ideas people came up with,” she said.

After watching her father fight a losing battle against FPL for so long, the award is a win for her entire family, she added.

“It’s a positive for all of us. It’s the first good news for a long time. They’ve been ramming against a wall not going anywhere,” she said. “Finally, the wall has somewhat moved. It’s satisfying, a good balance of enjoyment and determination of fighting the greater powers that be.”