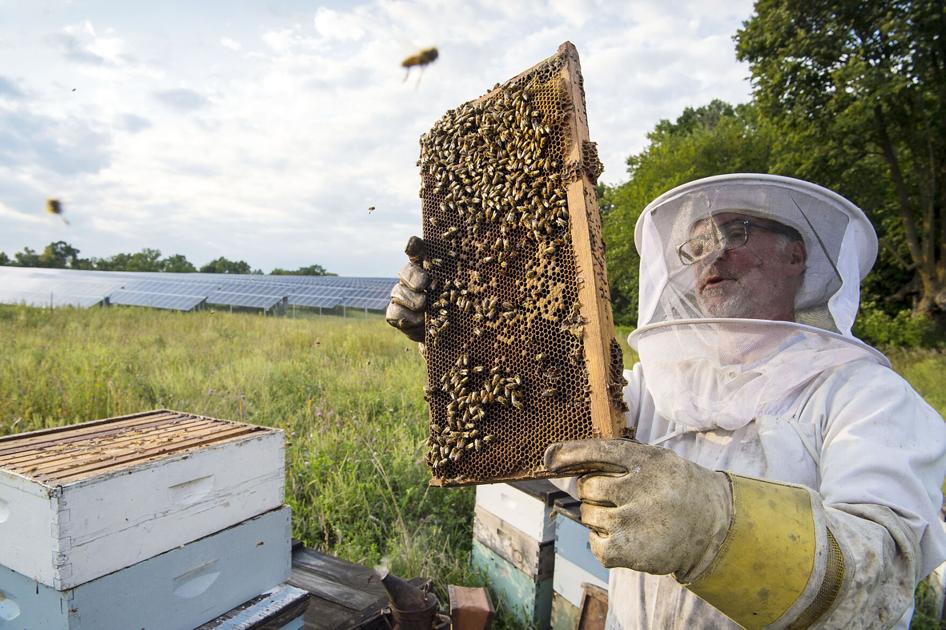 ANDERSON â€” As utilities retire coal-fired power plants, a boom in solar farms is expected in the Hoosier state.

Planting pollinator habitat around those new solar arrays could go a long way toward reversing the decline of pollinators in the state, and the idea is catching on.

According to the Solar Energy Industries Association, Indiana had the capacity to produce 444 megawatts of solar power as of the first quarter of 2020.

A study by EQ Research found investor-owned utilities are planning to add 6,400 megawatts of solar by 2030, and that doesn’t include solar installations by co-ops, municipally owned utilities, businesses and residential installations.

According to the study, a one megawatt array requires between 5-10 acres of land.

“We’re looking at land that is approximately … one-sixth to one-fourth the size of the Hoosier National Forest in new solar development,” said Brock Harpur, an assistant professor of entomology at Purdue University and a bee biologist.

“If all of that were to be pollinator-friendly in some way, that is it’s using instead of turf grass or gravel … that’s a substantial gain for pollinators.”

Inovateus Solar is building a 16-megawatt facility on 80 acres in Logansport. Electricity from the array will partially replace power once produced by the town’s coal-fired plant, which was retired in 2016.

A pollinator seed mix will be planted under and around the solar panels. Inovateus has used pollinator habitat at other installations; this will be the first for the company at this scale, said Tyler Kanczuzewski, vice president of marketing and sustainability.Â

The environmental benefits of planting pollinator habitat include reducing stormwater runoff, according to Kanczuzewski.

From one half to one third of the site would need to be mowed annually, rotating each year according to a technical guide published by the Michiana Area Council of Governments.Â

Some studies have also shown that pollinator habitat reduces temperatures under the panels, increasing their efficiency.

“Electronics, in general, work better in cooler conditions,”Â Kanczuzewski noted. “Solar panels are the same; the cooler they stay, they actually work a little better.”

EQ Research’s study listed other economic benefits, including increased production of nearby crops â€” Indiana is the nation’s third largest producer of tomatoes â€” that require pollination, increased honey production and improved soil quality. After the array is decommissioned, the pollinator-friendly practices will have increased organic matter and water retention of the soil.

“One of our hypotheses is that the pollinator habitat and the native vegetation will actually serve to improve the quality of the soil, especially over the agricultural activities that would have been happening on it,” said Jordan Macknick, lead energy-water-land analyst at the National Renewable Energy Laboratory.Â

“What we’re seeing is a reduction in erosion and then also the ability of these native plants to store carbon and return nutrients to the soil,” Macknick explained.

The renewable energy lab is funded by the U.S. Department of Energy. The lab’s InSPIRE project seeks to quantify the benefits of low-impact solar farms.Â

“We’ve got 25 different field sites that are located across the country where we are evaluating something related to this, integrating solar and agriculture,” Macknick noted.

Macknick traces the practice back to 2010 when NREL was considering a solar array installation.

“Anytime we did something on campus we needed to make sure it had a net positive impact on the environment,” he said.

Staff at the renewable energy lab looked to scientific literature to find what native plantings would do well around and underneath the panels but didn’t find anything on the topic. So they started their own research.

In the last half dozen years the practice has caught on in the industry. Minnesota was one of the pioneers, according to Macknick.

The Minnesota Department of Natural Resources published a technical guide in 2016. It was adapted by the Michiana Area Council of Governments and published in January.

That’s where Darrin Jacobs, zoning administrator for the Henry County Planning Commission, learned about the practice.

Henry County started working on a solar farm ordinance at the end of last year and is considering requiring pollinator-friendly habitat.

While there have not been any specific projects proposed, the county is writing the ordinance knowing there likely will be.

“I think that there’s probably going to be a call for there to be some flexibility in it,” Jacobs said. “I’m not sure that we would require full pollinator plantings and there may be some flexibility built in to allow other types of farm-related uses.”

Randolph County recently passed a solar ordinance requiring that ground cover under and around solar panels be native meadow grasses and pollinator-friendly wildflowers or clover.Â

EDP Renewables is developing the state’s largest solar array, Riverstart Solar Park, in the county and will be subject to the new ordinance. Riverstart will produce 200 megawatts on 1,400 acres, enough to power 36,000 homes.

Madison County is also considering pollinator habitat as part of its solar ordinance.

“I’ve had a lot of farmers that have submitted that information to me,” said Brad Newman, director of the county planning department.

The Lone Oak Solar Farm proposed for Madison County would produce 120 megawatts. Some residents opposed the project and have gone to court to try to overturn the Madison County Zoning Board’s approval of the project.

The improved aesthetics of flowers blooming around the arrays, plus the benefits to the soil provided by the pollinator habitat that persist after the array has been decommissioned, could help the projects be accepted by their neighbors, Macknick said.

“This has emerged as a way in which they (developers) can demonstrate that they’re going to be good stewards of the land,” he pointed out.