Should land be used for solar panels or agriculture? – GreenBiz 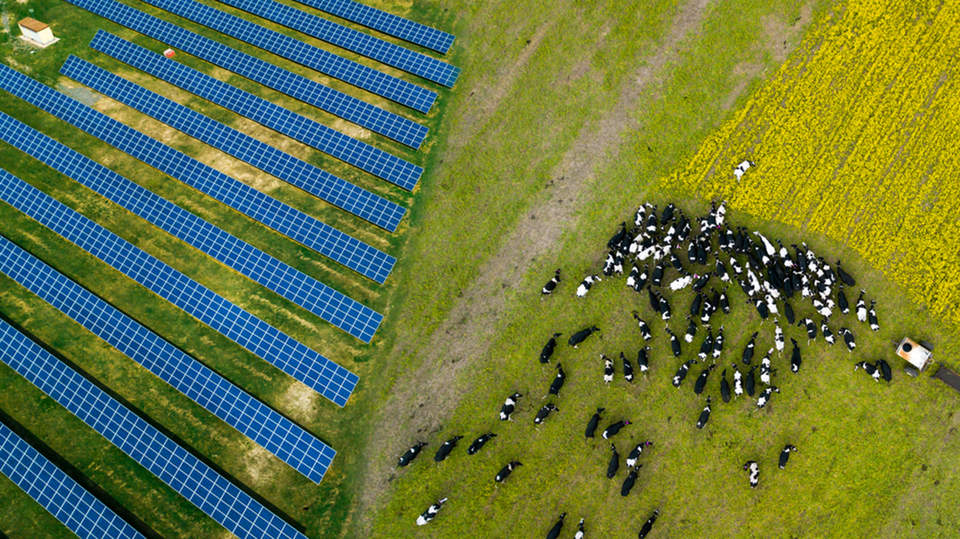 Lexie Hain tucks a chunk of business cards in her back pocket before bounding up to speak to a room of 75 livestock farmers. On a rain-dumping January day, theyŌĆÖve driven in from around New York and New England. A polite lethargy has set in by the time Hain, the final presenter, stands up, but her talk, “Solar and Sheep: The New Power Couple,” jolts the crowd like a dozen diner-coffee refills. By the end, Hain is slapping backs, handing out cards and promising to talk farmer to farmer to the dozens lined up. The conference sponsor, Cornell Cooperative Extension, has to boot her out of the ballroom before the hotelŌĆÖs next scheduled event.┬Ā

Hain had projected image after image onto a big screen: the woolly, timeless faces of sheep munching among the sweeping, futuristic angles of solar arrays. Hain and her wife, Marguerite, farm in New YorkŌĆÖs Finger Lakes region, where Hain tends a flock of 100 ewes. For the past few years, she has grazed those sheep on a 4-acre Cornell University solar field. In 2017, Hain co-founded a trade group, the American Solar Grazing Association, after realizing that sheep such as hers could not only help earn a farm living, but also solve a larger problem.

The question lies in how to define “productive use.” Are fields of open, often fertile land better used for producing renewable energy or food? The United States already hosts more than 2 million solar installations, and photovoltaic capacity is projected to more than double over the next five years. Meanwhile, our growing global population means weŌĆÖll need to produce 70 percent more food to feed 2.2 billion more people by 2050. An emerging land-use solution is called agrivoltaics: co-locating solar panels with agriculture.

Within the small-but-growing U.S. agrivoltaic industry, an early winner is making solar ground into pasture for sheep. ItŌĆÖs common practice in countries such as the United Kingdom and Uruguay. When sheep graze on fields that also support solar arrays, the same land can produce energy, wool and meat, all at the same time. Not to mention the benefits of their manure and hooves to the soil health.┬Ā

Some farmers are installing solar to power their own farms. Others, including the American Solar Grazing AssociationŌĆÖs several hundred members, are renting out their sheep to solar companies for vegetation maintenance.

The collaboration is a win-win ŌĆö the shepherds earn extra income, and the sheep keep greenery trimmed for less than it would cost solar companies to mow. Lots of news coverage has called sheep cheaper, nimbler, lower-emission lawnmowers. Hain likes to joke about how simplistic it sounds: “Solar brings jobs. Some of those jobs could be ours!” she tells her fellow livestock farmers, to chuckles, at CornellŌĆÖs grazing conference. But then, for the next 45 minutes, she talks about how much deeper the solar sheep solution goes than jobs and cost-savings.┬Ā

The sheep benefit from the windbreak and shade of solar panels, often napping under them on sunny days. In turn, they keep plants from growing high enough to shade or disturb the panels. The solar fieldŌĆÖs vegetation provides the sheep food. Sheep will eat almost anything, except thistle. That includes turf grass (although it sometimes has a fungus that keeps the sheep from gaining weight). Rotating the sheepŌĆÖs grazing around different parts of the solar array, fed on a mix of grasses, is optimal. Their manure then turns around and fertilizes the land.┬Ā

Shepherd Kim Tateo loves the sound of that. She has come to the grazing conference expressly to hear Hain speak. Part of the fresh generation of urbanites-turned-agrarians, Tateo left her work in New York CityŌĆÖs composting industry several years back to farm upstate. She grazes about 20 sheep at AlbanyŌĆÖs Tivoli Lake Preserve. But with city grant funding for the project drying up, she says, she needs a new income stream.┬Ā

“Learning more about it, it makes total sense to have sheep there,” Tateo says. “These sheep will eat the grass and improve the soil. Instead of just having dead panels, you can have something that is very alive and at the same time producing energy.”

In San Antonio, Ely Valdez sees even more benefits. Five years ago, he owned a traditional landscaping business. He lived on a ranch with about 20 sheep, which he raised mostly as a learning project for his young sons, Ely, Eric and Emilio. Then, in 2017, he read a news story about solar sheep. It struck him with the force of the Texas sun hitting a photovoltaic panel.┬Ā

“Running all over with weed wackers gets pretty hard on my guys when it gets to 102 or 105 [degrees Fahrenheit] in the summertime,” he says. “ItŌĆÖs relaxing to go see the sheep underneath the panels.” His whole business model changed.

ValdezŌĆÖs ranch sits in a hot but surprisingly lush spot between the San Antonio and Medina rivers. The water quality is frequently tested by San Antonio River Authority, so to prevent chemical runoff, Valdez has a company rule that prohibits the use of herbicides. In the rainy season, Valdez says, the Johnsongrass plant can grow 2 to 3 inches per day. High-reaching sunflowers can quickly shade solar panels, too. His animals nibble both while the plants are small. “Sheep have been the best result for the problems we have here,” he says. “ItŌĆÖs a great impact for the environment.”

There are challenges, though. Making sure the sheep have enough water takes constant vigilance, Valdez says, especially in the Texas heat. A coyote snagged one of his lambs once. And a couple times, sheep have rubbed up against the emergency-stop button, calling a technician to the site. But itŌĆÖs worth the occasional trouble, he says, especially when summer temperatures rise.┬Ā

After the lambing season that began in January, Valdez will be up to 400 sheep this year, with a goal of getting the flock to 1,200 sheep that can graze on multiple solar arrays.

Fuzz, buzz, and beyond

Sheep, of course, arenŌĆÖt the only livestock that graze. Solar co-location experiments also are being done with other animals. A test project at the University of Massachusetts Crop Research Station, for instance, placed panels 7 feet off the ground so cattle could graze underneath. Although it worked well, the cost of steel to mount panels at this height largely has kept developers from following suit. Trials with goats, meanwhile, have shown that installations also might have to be modified, because the goats sometimes jump on panels or chew wires.

In the same way that solar grazing can meet human needs for food, warmth, energy and economic activity, it can also feed the Earth.

Experiments also are being done with row crops so theyŌĆÖre partially shaded by panels and thus use less water. University of Arizona researchers have been testing whether foods such as tomatoes, peppers, chard, kale and herbs could grow better under photovoltaic panels in dryland areas. Last year,┬Ātheir study┬Āfound that chiltepin pepper plants yielded three times as much fruit, and tomatoes twice as much, in the agrivoltaic setup.┬Ā

Where sheep are involved, yet another food can be made on the same land: honey. Setting aside more pollinator habitat has been imperative since a combination of pesticides and mites contributed to mass honeybee die-offs over the past decade. Companies such as Minnesota-based Bare Honey are marketing products made with “solar honey” as value-added. The American Solar Grazing Association has helped develop a seed mix of plants with Ernst Conservation Seeds for the Northeast region that are good for sheep and also provide pollinator habitat. Hain, always good-humored, had it named Fuzz & Buzz.┬Ā

For shepherds, the remaining challenge is that the number of sheep, and the people who tend them, will grow. aldez already has expanded his flock, and Tateo hopes to. The network of processors and customers will necessarily need to grow up around them, too. In the same way that solar grazing can meet human needs for food, warmth, energy and economic activity, it also can feed the Earth. “I love the idea of [aspects like] pollinator patches and making them into something that is feeding a whole ecosystem,” Tateo says.

“I am deeply aware of the need for that,” Hain answers. “ThereŌĆÖs going to be a whole community that builds up.”