Saranac solar project to be up and running by November – NNY360 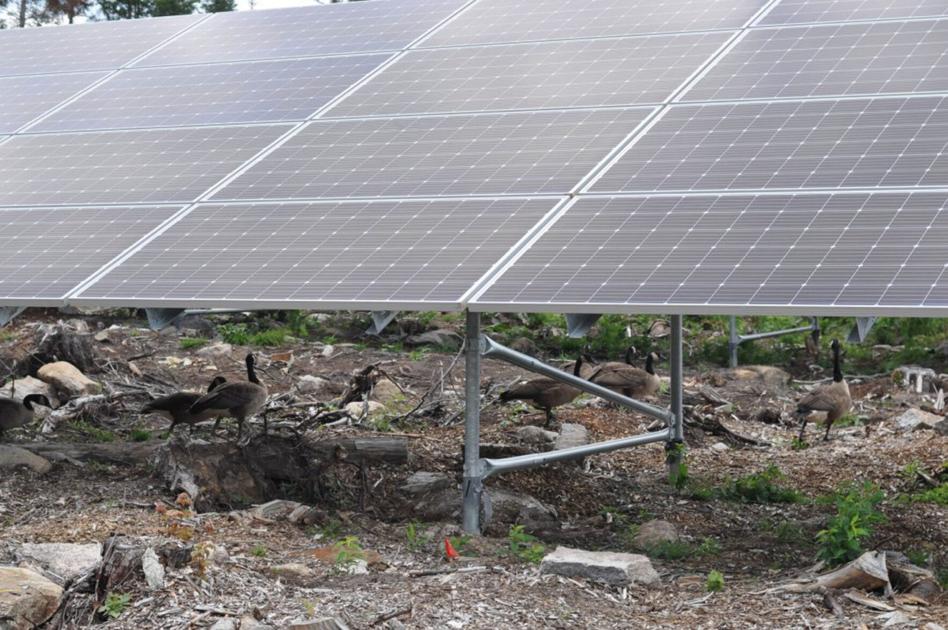 SARANAC LAKE â€” On a recent July morning, solar panels bent across a stretch of land north of the village like a Richard Serra sculpture. A flock of geese wandered among wood chips underneath one row of the 72-cell silicon panels â€” sandwiched by thin layers of glass and rigged onto sturdy aluminum frames â€” that will soon provide renewable energy to the community.

After finally breaking ground in May, Saranac Lake Community Solar is now taking subscriptions and is slated to be up and running by early November. And by spring, the wood chips will be replaced by interweaving fields of wildflowers and native plants.

Set on 10 acres on state Route 86 just north of Lake Colby, Saranac Lake Community Solar will be the first community solar farm in Adirondack Park. The 10 acres are part of a 22-acre parcel owned by Lee Keet of Saranac Lake, who bought the property in 1999 to block a potential Walmart. Earlier this year, Keet stated that he intends to gift the land to a nonprofit group to promote more solar projects in the Adirondacks.

â€śItâ€™s been a long time in the making,â€ť said Mike Roach, director of business development at Sunvestment Energy Group of Frederick, Maryland, which is running the project with RER Energy Group of Reading, Pennsylvania. The project hit delays, first due to the north country winter and then the COVID-19 pandemic.

Unlike many solar projects, which can span hundreds or thousands of acres or consist of just a few panels on the roof of a house, community solar is part of a renewable energy model that operates through a subscription service.

Saranac Lake Community Solar partnered with National Grid, which already supplies local customers with electricity. Both residential and commercial customers can subscribe, then use the electricity credits generated by the solar farm as part of their National Grid bill for a 10% savings on that bill. There is no subscription fee.

â€śNew York state has set some pretty ambitious carbon offset targets and renewable energy goals,â€ť said Roach. â€śBefore community solar, the way to get solar was you had to put it on your house or business. So you had to have a house or a business. It really sidelined folks who didnâ€™t have those.â€ť

As of Wednesday, the project has reached over 60% of its subscription target, which will encompass an anchor tenant â€” a common aspect of the membership structure of most community solar projects â€” and 200-250 residents and small businesses. The 2-megawatt system size will generate approximately 2.5 million kilowatt hours per year.

Saranac Lake Community Solar will also be the first pollinator-friendly solar farm in the Adirondacks. Early on, said Sunvestment Project Developer Conrad Karsten, they wanted to add a conservation component to the project, so getting involved with AdkActionâ€™s Adirondack Pollinator Project was a natural fit.

AdkAction, a multi-task force of Adirondack residents that was formed in 2007, built 10 pollinator gardens in local schools and gardens around the region last summer. The solar project will be the largest habitat theyâ€™ve created. â€śPolitator populations have been decimated of late,â€ť said Roach. â€śItâ€™s a win for us, because all we need is for whatever is growing on the ground not to grow so high that it provides shade.â€ť

Brittany Christenson, AdkActionâ€™s executive director, said that sheâ€™d initially hoped to get volunteers out planting this year, but that will have to wait until spring due to COVID-related safety concerns. Christenson, whoâ€™s done a site evaluation and taken soil samples, said the delay will, however, give time for construction to finish and to allow for planting of wild bergamot, butterfly milkweed, asters and goldenrod and other native plants and wildflowers.

â€śIt ended up being a really easy and awesome initiative,â€ť said Karsten of the Pollinator Project. â€śWeâ€™re hoping it will be kind of a pilot both for us and AdkAction.â€ť

â€śOur hope is that communities will replicate this through the park,â€ť said Mike Carr, executive director of the Adirondack Land Trust, a regional land conservation organization. â€śI think they made a great pick for the site,â€ť he added, citing the locationâ€™s proximity to power lines, a hospital and the village.

â€śEnergy is a challenge here. Itâ€™s a severe winter climate and some people really struggle,â€ť said Carr. â€śAnything that beats back the effect of climate change here in the park is headed in the right direction.â€ť

Those interested in signing up for the service can visit saranalakesolar.com and sign up through the online portal. Energy credits will be applied to your National Grid utility bill, and there is no cost to enroll.