Sandwich Industrial Park Will Add Solar Farm To Its Customer Base – CapeNews.net 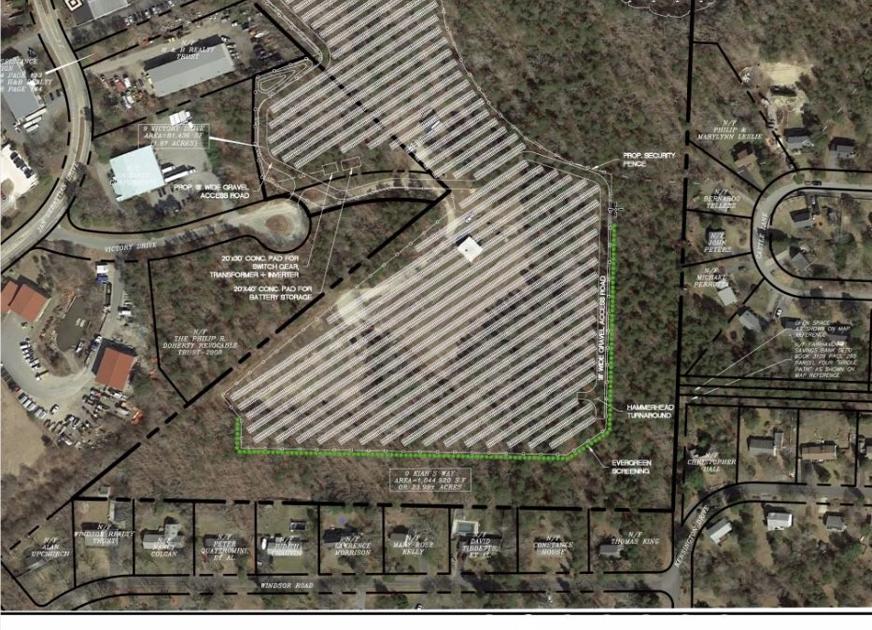 After asking several questions about noise, trees and property taxes, the Sandwich Planning Board on Wednesday, May 5, said “yes” to a solar farm proposed for a parcel at the end of Jan Sebastian Drive.

The 46-acre property, owned by the Housing Assistance Corporation, was the home of a community garden for several years. The unanimous vote by the planning board on Wednesday night will allow the acreage to metamorphose into 2.1-megawatt ground-mounted solar farm.

The vote came after an hour-long public hearing. Much of that time was used by Lodestar Energy’s Dan Watson, business developer, to describe the project.

The Victory Drive Solar array would be built by Connecticut-based Lodestar Energy on 15 of the 46 acres owned by HAC. About 32 acres would be permanently conserved as open space, Mr. Watson said.

Neighboring properties would be buffered from the solar farm by more than 100 feet of evergreen and native vegetation, and the green spaces and meadows between and around the solar panels would be planted with pollinator-friendly plants and grasses, the company has said.

A vernal pool on one of the three parcels would also be provided a 350-foot vegetative buffer.

In addition, the company’s mowing and fencing practices would protect box turtles in the area. Specifically, machine mowing would only take place between November and March, when the turtles hibernate, and the perimeter fencing would have 6 inches of clearance at the bottom to allow turtles to move in and out of the compound, the company has said.

The solar farm would provide some $60,000 worth of energy savings for consumers and would give the town an unspecified amount annually as payment-in-lieu-of-taxes, Mr. Watson said.

The PILOT payments will be worked out between Lodestar and the town assessor’s office, Mr. Watson said in answer to a question about property taxes.

Planning Board member David Darling asked how loud the solar farm would be.

Mr. Watson replied that the cooling fans would make a whirring sound.

“It does not make a lot of noise,” Mr. Watson said.

Although there are no immediate neighbors to the industrial park, there are neighborhoods nearby.

Lawrence Morrison, who lives on nearby Windsor Road, said the neighbors enjoyed a 150-foot buffer of forest between their neighborhood and the HAC property. The solar farm proposal would greatly reduce the buffer and create an eyesore of tree stumps.

Mr. Watson said the company planned to reduce the tree cover at that end of the parcel because shading could affect the panels’ ability to take in sunlight.

Many years ago HAC had intended to build low-income housing on the site. The lack of infrastructure and nearby services, however, made housing an impractical use, at least for now, HAC has said.

After much research, HAC determined that a solar farm would be the best, and least intensive, use of the land. Lodestar, which is based in Hartford, offered the best plan, HAC has said.

Lodestar will lease the land from HAC for 25 years, and if it is going well and still profitable at the end of that time, the company could negotiate for another term, Mr. Watson said.

As the Cape Cod Commission had done after it weighed in on the project last year, the planning board imposed about 20 conditions on the project.

They included limiting construction hours to 8 AM to 5 PM, installation of erosion and drainage controls, performing periodic maintenance, cleaning panels with water only, prohibiting use of pesticides, planting and maintaining a 100-foot buffer, and compliance with fire and building safety codes.