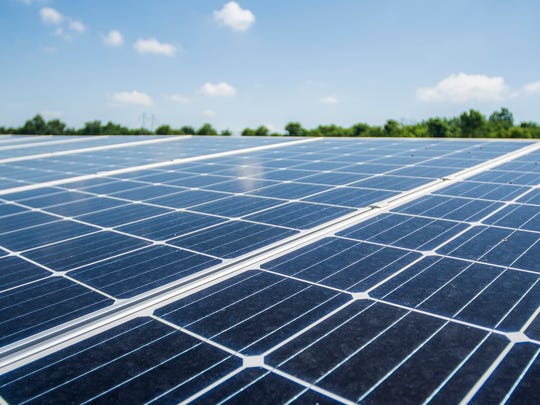 Solar panels are seen at an Indiana Municipal Power Agency solar farm on the far-east side of Richmond on Friday, June 29, 2018.Â (Photo: Mickey Shuey/Palladium-Item)

RICHMOND, Ind.Â â€” Plans for what would be the city’s largest solar park yet has won final approval, clearing the way for thousands of panels to be installed across the road from Forest Hills Country Club.

The Indiana Municipal Power Agency has been building solar parks in Richmond for more than five years since a 2014 pilot project included a smallÂ field of panels next to the Richmond Power & Light office at 2000 U.S. 27 S.

Since then, parks have been builtÂ on either side of Interstate 70 on the city’s far-east side, and work on a fourth siteÂ â€” on Industries Road between Flatley and Salisbury â€” began in December.

The latest project will be built on about 75 acres on the southwest corner of Wernle Road and South 23rd Street. Construction on the 55,000-panel park is expected to startÂ either late this year or early next and wrap up by the end of 2021.

Altogether, the parks will generate 22 megawatts of electricity, with the newestÂ site accounting for about 16 on its own. That’s enough to power some 5,600 homes a year.

IMPA had to get the city’s approval for the project because it requires rezoning the land across South 23rd Street from Forest Hills Country ClubÂ from dense residential to institutional zoning.

That request got a unanimous recommendation for passage from the Richmond Advisory Plan Commission last month after the city’s planning staff declined to say whether the commission should approve it or not.

“We had originally recommended no recommendation for this because it doesn’t line up with the future land use map designation, which is for agricultural/rural residential,” Matt Evans, the interim city planner, told the Richmond Common Council this week, “but we did find a lot of other goals and strategies, policy recommendations in the comprehensive plan fit very well with solar park development.”

“If this is zoned R3, it would need some pretty extensive water and wastewater facilities to serve homes that would be in that area,” she said, “which … would be pretty expensive for the developer to do, probably so expensive that it wouldn’t make sense to do so it would be up to the city to extend those services, which may not be an option.”

IMPA met recently with its would-be neighbors during an open house at Forest Hills Country Club to hear their thoughts on the organization’s plans.

As a result of the concerns expressed then, IMPA made changes, eliminating panels that would have been set up right at the corner of Wernle and South 23rd where there is no natural cover.

“All we hear from companies anymore it seems is they want to know what the renewable resources look like in communities, and you certainly have a number of those to point to,” she said.

In the end, city council unanimously approved the zoning change without comment.

Jason Truitt is the team leader and senior reporter at the Palladium-Item. Contact him atÂ 765-973-4459 orÂ jtruitt@pal-item.com.