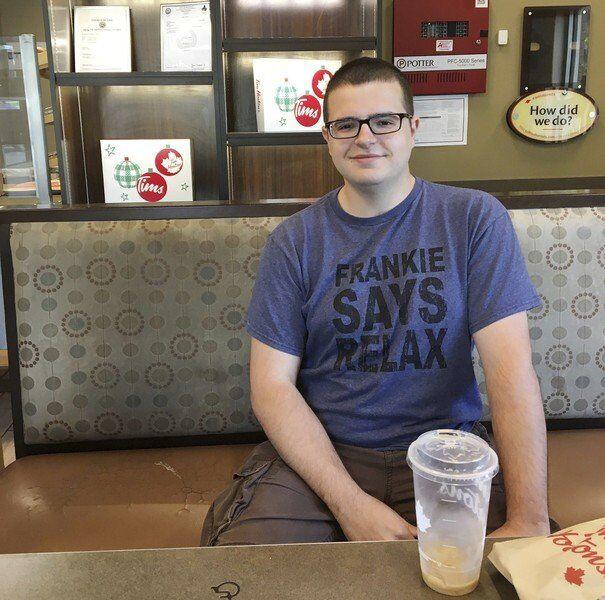 While the decisions on local solar farms will be made in the board rooms of several local municipalities, that hasn’t stopped many on social media from debating the issue, whether they had factual information or not.

The debate has been especially heated surrounding the siting of a 45-acre solar array on a local dairy farmer’s land. While the battle raged, one college student charged into the fray.

Frank Allen is 24-year old and a student at the SUNY University at Buffalo (UB) where he’s studying physics. He said he hopes to learn more about popular space-and-time shifting ideas like string theory as he progresses in his studies. However, having grown up in Cambria before moving to the city of Lockport, Niagara County is home.

While perusing the Facebook groups dedicated to the area, he came across various posts about solar energy. Allen said he considers himself a political centrist, but leans toward the right, and he found it interesting that what he considers a purely technological and environmental issue seems to be a massive political issue separating the left from the right.

“I support renewable energy as a whole, and from what I found through all the arguments going back-and-forth online, it seemed like anyone who was anti-solar, it was strictly a political thing,” Allen said. “It’s strange, all the people who are anti-solar are die-hard Republicans and that’s the demographic against solar panels from my point of view.”

Allen found it strange when he realized that by supporting solar panels, he was supporting a liberal agenda pushed by the government, according to the logic drawn by those opposing the renewable energy project, but found it even more strange that Republicans would be against something that essentially was a private property issue. As he investigated, though, he realized that along with a political bent, the issue was strewn with misinformation and he set about trying to set the record straight.

“A lot of what they try to push as reasons why you shouldn’t have solar is a lot of empty claims,” Allen said. “People make the claims that if there is a bad storm or a fire that panels would crack and leak some kind of toxic chemicals into the ground. That’s not really how it works. There’s no toxic liquids in the panels. They’re solid. They’re made with some toxic chemicals, but the panels are designed to withstand extreme weather and extreme temperatures. Even if there was a forest fire that broke out, the panels wouldn’t crack and leak toxic chemicals into the ground.”

Allen noted that he also discovered that the main project, which was blowing up on social media – the Slayton Settlement Road project in the Town of Lockport – featured panels that were not made with cadmium, the toxic ingredient referred to by opponents of the project.

The information Allen debunked via Facebook took time. Not everything was ‘crazy’ but some of it did seem a bit far out.

“If you’re going to claim that solar panels have a bad odor to them, that’s just …,” he said and laughed. “That’s not rooted in reality!”

Some of the claims that Allen felt he had to push back on included:

• Noise: “According to the application that the (Slayton Settlement project) developer filed, there’s going to be no noise from the panels, because they’re just panels sitting there. The only noise will be when there’s construction.”

• China: “I know one of the concerns is that the majority of panels worldwide are created in China. I can understand not wanting to give more business to China, but that only makes sense because they have a lot of renewable energy – though they also pollute – and we don’t have as much and haven’t invested in them. It doesn’t make sense for an American company to manufacture them if no one in America is buying them.”

• Temperature: “What has some credibility to it is (the claim regarding) temperature difference,” said Allen, noting that some people believed that an entire ecological system was being threatened because of heat generated by the panels. “If you have a large area covered with solar panels there is a temperature rise. There was a study done to show that, but that study was based on much larger panels and they were installed in the desert. Apparently if you have these really large solar panels, they reflect the sunlight and increase the temperature in that area. Even in that study, the temperature difference was only where the farm was. That effect dissipated in 100 feet. … It’s not heating up Western New York, it’s heating up the farm.”

Not all of the information he came upon was without basis, Allen said.

“One of the legitimate concerns I’ve heard is when the project is completed, (the solar company) going to get a percentage refunded back to them (through government subsidies),” he said. “That’s coming right out of our pocket.”

Allen also said that more people should understand the difference between good and bad research. He uses Google Scholar and said he didn’t have much trouble finding information, but he pursued scholarly articles and not just any website.

“I try to stick to more educational websites, more credible sources than ‘americanpatriot.org,’ something like that,” Allen said. “The best thing to do for yourself is to check your sources. There’s a difference from a university publishing a paper and taking facts off a website that makes a claim there was a study done eight years ago, and we think this because of it. Just because Shmo writes an article about it, it doesn’t necessarily make it true.”