WASHINGTON, D.C. â€“ Tech giants, major retailers and other corporate leaders are making significant investments in clean energy and installed 1,286 megawatts (MW) of new commercial solar capacity in the United States in 2019, the second largest year on record according to the latest Solar Means Business report. The annual report, released today by the Solar Energy Industries Association (SEIA), tracks both on-site and off-site installations and highlights the strong appeal of cost-saving solar energy for American businesses.

â€śThe worldâ€™s most recognizable brands are walking the walk when it comes to their clean energy commitments,â€ť said Abigail Ross Hopper, president and CEO of SEIA. â€śBusinesses are choosing solar energy because it can significantly curb their energy costs and add predictability during these uncertain times. We expect that the corporate sector will make greater investments in solar as businesses make and follow through on clean energy commitments to address the climate crisis.â€ť

Apple and Amazon remain in first and second place when it comes to the top corporate solar users, followed by Walmart, which installed the most solar in 2019 and increased its solar use by 35%. This year was also the largest year yet for onsite commercial solar installations with 845 MW installed.

Apple, which has the most off-site solar installed through 2019, now has nearly 400 MW of solar capacity in its portfolio and has recently committed to make its supply chain and products 100% carbon neutral by 2030.

â€śThe choice between a healthy planet and good business strategy has always been a false one, and weâ€™ve proved that with a company that runs on 100% clean energy and a supply chain transitioning to do the same,â€ť said Lisa Jackson, Appleâ€™s Vice President of Environment, Policy and Social Initiatives. â€śSolar power has been part of our environmental journey for more than a decade, and weâ€™re grateful to the SEIA for this recognition of the strides weâ€™ve made, and the strides of two of our suppliers also in the SEIA top 25. Together, weâ€™ll reach our goal of making all our products with a net zero climate impact by 2030, and hopefully, inspire others to act urgently in defense of our planet and future generations.â€ť

The report tracks 8,358 MW of commercial solar capacity across more than 38,000 systems. Combined, the systems generate enough electricity each year to power 1.6 million homes and offset 8.9 million metric tons of CO2 annually. For perspective, each week more than 7.2 million people, or 2.2% of the U.S. population, shop at a Walmart store with a solar installation.

â€śOur growth in solar use reflects our ongoing and longstanding commitment to climate action, including getting to 100% renewable energy globally by 2035,â€ť said Kathleen McLaughlin, Chief Sustainability Officer, Walmart Inc. â€śReducing greenhouse gas emissions and avoiding the worst effects of climate change will take sustained, collective action. Itâ€™s terrific to see so many companies growing their solar use and taking steps towards a renewable future.â€ť 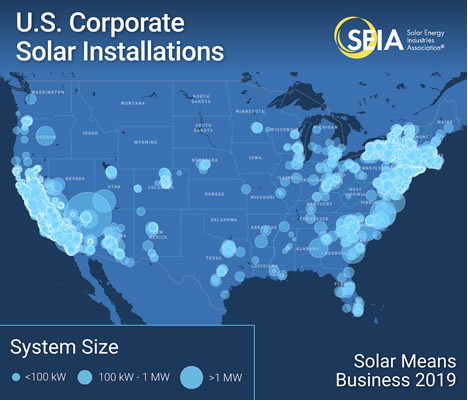 Corporations continue to procure off-site solar to power their operations and meet their ambitious clean energy goals. Over the next few years, an additional 5 GW of corporate off-site solar projects are slated to come online, which will more than double the total amount of off-site corporate solar.

â€śAs a signatory to The Climate Pledge, weâ€™re committed to meeting the goals of the Paris Agreement 10 years early and reaching net zero carbon across Amazon by 2040,â€ť said Chris Roe, Energy and Sustainable Operations Lead at Amazon. “As part of this commitment, we are well on our way to power Amazon operations using 100% renewable energy by 2025, with over 90 wind and solar projects across the globe.â€ť

Facebook, one of the top buyers of off-site solar is making its first appearance in the top 10 and made the biggest leap forward, jumping from 27th to 9th on the top corporate solar users list. Target, the company with the most solar capacity installed at its facilities, finished 2019 with a total of 283 MW of solar capacity. The company now has more than 500 solar projects in its portfolio. 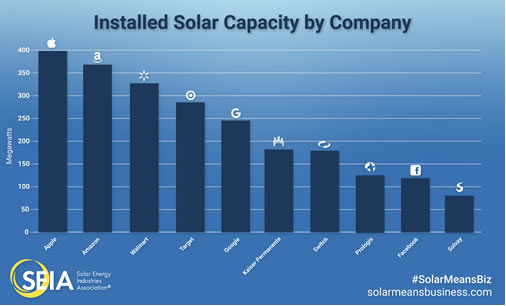 Companies are also doubling down on their clean energy commitments. Several corporations on this list recently announced more aggressive clean energy goals, including Google, which is ranked 5th and now plans to run its data centers and corporate campuses on 100% carbon-free power by 2030. Walmart also announced that it plans to power its facilities globally with 100 % renewable energy by 2035 and is targeting zero emissions across its global operations by 2040.

Other companies on the list, including Amazon, Microsoft, and Solvay have recently announced new initiatives and investments to lower emissions and green their operations.

â€śWe are honored to be recognized again by SEIA for our commitment to increasing solar power in our operations,â€ť said Pascal Chalvon Demersay, Solvayâ€™s Chief Sustainability & Energy Officer. â€śSolar power plays a key role in our Solvay One Planet initiative, which aims to reduce our emissions by 26% by 2030. Weâ€™ll continue developing solar projects to help enable the energy transition, particularly in the US.â€ť

Others, like Prologis, have specific goals for rooftop solar and Switch and Walmart are beginning to use energy storage.

â€śThis acknowledgement further cements Switchâ€™s position as a leader in sustainability, which tremendously benefits our customers, the communities where we operate and our planet,â€ť said Switch EVP of Strategy Adam Kramer. â€śSwitch continues to lead the challenge to expand solar by recently breaking ground on critical projects like Rob Royâ€™s Gigawatt Nevada, which will generate a Gigawatt of solar combined with battery storage, providing clean energy solutions far into the future.â€ť

â€śAs the world’s largest owner and operator of logistics real estate, Prologis is committed to minimizing our environmental impacts, and every solar panel installed helps us get closer in the transition to clean energy,â€ť said Jared Friedman, Prologis, vice president of Global Energy. â€śRooftop solar is a vital component of Prologisâ€™ growing portfolio of customer-focused renewable energy solutions, and we are proud to be honored by SEIA as we work toward our goal of doubling our onsite generating capacity to 400 megawatts by 2025.â€ť

« City to move ahead with several small solar panel projects – Harbor Light US residential solar set for a record-breaking year â€” despite, and because of, 2020 – pv magazine International »