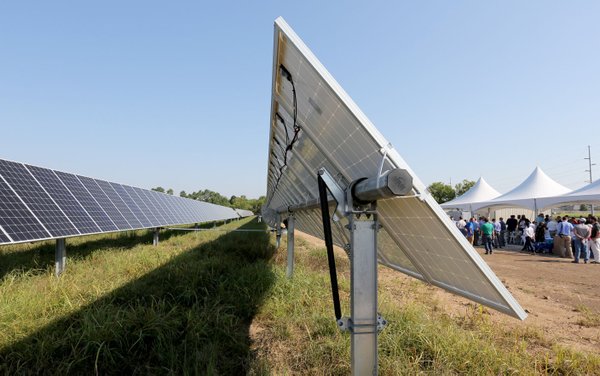 The Arkansas Public Service Commission was urged Thursday to take quick action to resolve rate issues related to solar usage and deployment across the state.

In a daylong public hearing, attorneys representing utility companies, state regulators, the attorney general, consumer groups and businesses told the three commissioners that an immediate decision is needed to clarify rate issues that are troubling for the electric providers and solar customers.

“We need the commission’s decision in the near term, not six months or a year down the road,” said Stephen Cuffman, an attorney representing Southwestern Electric Power Co. It would be ideal for the commission to issue a ruling in the first quarter of 2020, he said.

At issue is the growth and deployment of solar power and net metering for solar users. Net metering applies to customers with solar panels who generate electricity and return excess power back to the grid.

The commission is considering how to define what qualifies as net metering and whether to establish a new rate structure for those customers. Under current rules, net-metering customers are compensated on a 1:1 basis: they are credited 10 cents per kilowatt hour for the power they return to the grid. That’s the same amount Entergy charges residential customers for power they use at home.

It’s critical that the commission decide how net-metering customers should be charged, according to Entergy Arkansas and other major electric utilities in the state.

“This is the heart of the matter that is at issue in this case,” Entergy attorney Matthew Suffern told the commission. “There is a need for the commission to act now.”

There is no timetable for the commission to issue a ruling.

Solar advocates and the commission staff want to keep the 1:1 rate in place, noting that legislation that went into effect in July already settles the issue by approving a 1:1 credit for net-metering customers. “The law is clear that 1:1 is now codified,” said Ross Noland, an attorney representing the National Audubon Society.

In addition, solar supporters have suggested that customers who have adopted the technology should be grandfathered into the current credit rates for 20 years, a time period opposed by the utility companies.

Avoiding grandfathering will smother solar growth, supporters say. “No one will be able to sell a [solar] project,” said Jason Keyes, an attorney for Scenic Hill Solar of Little Rock.

Entergy has proposed two-channel billing for net-metering customers, an alternative that is favored by most large utility providers. The option would allow electric providers to reduce the credit for net metering from 10 cents per kilowatt to nearly 3 cents per kilowatt hour, which the companies say they would pay to purchase wholesale power when needed. Entergy also has offered a grid charge as another option to replace 1:1 credits.

The Public Service Commission staff favors the 1:1 approach and argues that any changes to rates would require the utilities to open a rate case. Attorney General Leslie Rutledge’s office “strongly disagrees” with the rate-case idea, calling it a lengthy and costly proposition that won’t work. There would be a “never-ending cycle” of rate cases to consider, said Christina Baker, assistant attorney general for Arkansas.

More than 25 Arkansans offered public comments on the case, all in favor of keeping the current rates in place. John Sawyer, who operates a construction business in Jonesboro that is involved in solar installation, said he has invested $1 million in the past eight months to focus on solar installations.

“I and many others will continue to invest in Arkansas jobs” if rates remain as they are today, Sawyer said. Two other business owners involved in solar power offered similar comments.

Barry Haas said he installed solar panels about four years ago at his home in Scott. He said the commission should keep rates intact to protect his investment and not change them to protect infrastructure investments that utilities have made. “Fair is fair,” he told the commissioners. “Please make sure our kilowatt hours are fully credited and we are treated fairly.”

The utility providers contend that all electric customers are obligated to cover costs that were required to install the poles, wires, generators and other equipment that deliver electricity to homes and businesses. Those fixed costs “don’t just disappear because net metering is added,” Suffern said. “They are picked up by other customers.”

Bill Halter, chief executive officer of Scenic Hill Solar, testified that there is insufficient data in Arkansas to show that costs are shifted to customers who don’t deploy solar.

In fact, he said regulators should wait until about 5% of a utility’s market has solar penetration before considering whether to change net-metering rates.

“Right now, there’s no need to engage in all these discussions about cost shifting,” Halter said.

Entergy projects that customers who don’t have solar will pick up an additional $16 million in costs because of net-metering customers, based on announcements for coming solar projects in the state and those who have already connected solar panels. Over the life of some of these contracts, this could be more than $300 million being shifted to non-solar users, Entergy said.