Powering up the grid, Bush style | In The Bush | newsminer.com – Fairbanks Daily News-Miner 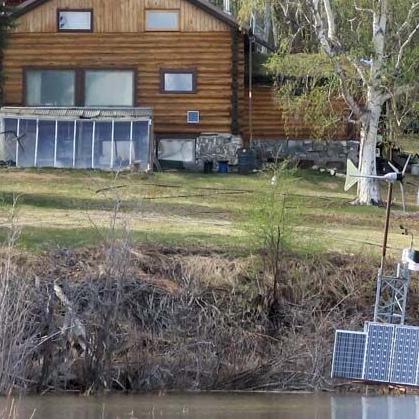 Electricity has always scared me, which is why we’re constantly worrying and fussing over our off-grid system. When respected and managed, power provides incalculable services, yet today few people think about it except during outages.

Our independent and self-educated father was remarkably handy with electricity, whether powering our Bush home or the bus-camper our parents constructed for road trips. My first shocking experience with electricity occurred when the ground disconnected from the charging system of the bus. With one hand gripping the metal door knob, my foot contacted the ground and my whole body spasmed with a hideous jolt.

Another startling electrical episode occurred when Miki and I left the old Phillip’s Field airport in Fairbanks one mid-winter evening after practicing flying. Our old car battery failed and the Bachner’s aircraft mechanic kindly offered a jump start. When he hooked up the cables in the darkness, a fireworks-sized array of sparks shot skyward. Dear Ed, he relieved our horror by cheerfully reporting, “I guess it works!”

Since we use electric fencing to keep our free-ranging horses from over-grazing the lawn, I have considerable experience with zapping myself. An easy way to test the fence for a good charge is to touch the wire with a blade of grass while feeling for the faint tingle of electricity, but all too often I inadvertently check the charge by accidentally brushing against the hot wire. The worst zap I received happened when I ducked under the wire and it contacted the top of my head. That jolt literally knocked me to the ground.

In the 1960s through the 1980s, our father rigged this Bush home with 12- and 110-volt power, solar and wind power, and an inverter system. He showed us how to use the equipment, but it scared us enough that we had no interest in performing any maintenance and we’ve paid for that oversight ever since.

After Daddy retired to Fairbanks, too elderly to advise us any longer, we hired a professional to erect a new wind generator, do some re-wiring, and install more modern safety features and display monitors. Adapting our old system for the new gadgets became a little hokey, but the set-up looked vastly better than our own feeble attempts ever had.

A few months later our expert’s home burnt down with an electrical failure, which did not inspire much confidence in our new improvements. However, it has been virtually trouble-free over the last 20 years.

During the interim we’ve worn out two more sets of deep cycle 12-volt lead-acid batteries. Each time we replace them, it seems that new technology is maturing to give us better options over the heavy, toxic, high-maintenance batteries that we’ve gone through since our father originally installed the system. For awhile I hoped hydrogen power might revolutionize the industry, but that alternative seemed to fizzle out.

Our most recent set of batteries, acquired in 2011, should have been replaced two years ago but our normally jumbled lives tracked worse than usual and the trade-out fell by the wayside. Last year my sister Miki researched the technology hoping Tesla’s new household batteries were small enough for us (they were not). Disappointed, she ordered the same batteries as before. Long story short, the company failed us and break-up broke up with no batteries in sight. Unable to haul them without a frozen trail, we had to cancel the order.

That forced us to crank up our little 1 KW generator twice daily to charge the tired batteries, and also whenever we wanted to vacuum, do laundry or watch TV. Then last September the old control box that manages incoming power from our solar panels stopped working. The batteries now relied entirely on the generator for recharging, and since the old things were already past nearly-dead we had to run the generator to simply charge a laptop, run the printer or use the fan in our stovepipe stack robber.

Our nifty little generator can run three to seven hours on half a gallon of gas, but even so we’ve burned a lot of fuel over the past few months.

The silver lining to this whiney little story is that during the past year we finally discovered a new type of battery from China with a lithium titanate cell which supposedly is environmentally friendly and more efficient with lower maintenance. This fresh technology is safe and light enough to ship by mail, unlike the 70-pound behemoths that little old ladies like ourselves struggle to throw around.

However, like any new technology, the unique technology probably has weaknesses yet to be exposed by years of hard use. A new system will also require a learning curve. Luckily we’ve known the private supplier for decades and he will tolerate our pathetic lack of electrical ability.

The batteries arrived by mail in March, well before trails grew slushy. I easily lugged the five boxes into the basement by myself, while each old battery typically required two of us and some shrieking to move.

Come June the new system will hopefully get installed with a new charge controller to bring the solar panels back online. We’ll still have to wait until freeze-up to sled away the old batteries, of course, and by then we’ll have a better sense of how well a completely new system will perform in the Bush.

If our house burns down or explodes, we’ll let you know.