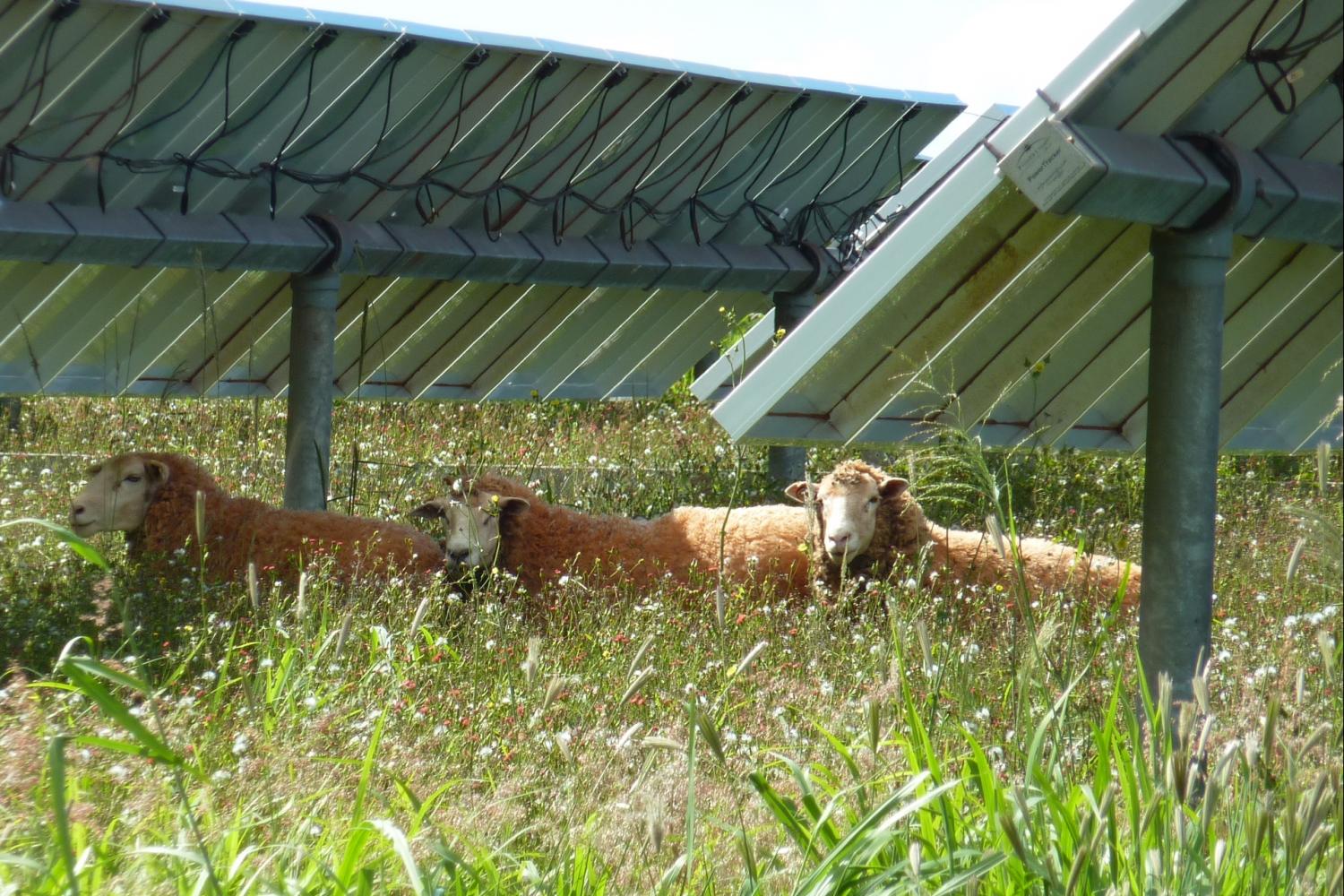 Just a few years ago, solar panels and farming were considered mutually exclusive. Although farmers could benefit financially by leasing some of their land for solar panels, they could no longer grow food crops there. Now it looks like farmers can get the best of both worlds, by using that same land for pollinator habitats and other agricultural uses.

The use of farmland for utility scale solar arrays has become an important part of the debate over food supply and land use.

The issue is especially fraught in a time of economic crisis for small farmers, for whom solar leases are a lifeline.

However, a new body of research called agrivoltaics is demonstrating that farmers can have the best of both worlds.

A recent report the National Renewable Energy Laboratory, for example, indicates that properly designed, low-impact solar arrays can be compatible with agricultural use.

Beyond simply enabling conventional farming, solar arrays can also contribute to the practice of regenerative agriculture, as shade from the panels can help improve soil health and aid in moisture retention.

In turn, the vegetation helps create a cool microclimate under the panels. Since solar cells function more efficiently when cooler, the overall effect is to improve the efficiency of the solar array.

Land use and the pollinator connection

Long term data on food crop growth under solar panels is not available yet, though evidence is beginning to emerge that peppers and tomatoes are among the best bets.

The use of solar arrays for pollinator habitats seems to be catching on much more quickly, and the initial research indicates that there can be a substantial impact on productivity in nearby fields planted with food crops.

Part of the motivation has to do with regulations in some states that limit the environmental impact of solar arrays on farmland, or that prohibit the development of farmland for non-agricultural use. In some states, new policies also proactively encourage pollinator habitats.

Last March, the bipartisan Environmental and Energy Study Institute reviewed the impact issue and noted that pollinator habitats can provide farmers with a pathway for achieving overall environmental improvements while benefiting financially from solar arrays on their land.

In particular, EESI took note of Minnesota, where soil degradation has been among the factors eating into farmland profitability.

â€śBy leasing land to solar developers, farmers can let their land lie uncultivated while still making a profit. This provides an incentive for farmers to prioritize land restoration, which will eventually pay off in healthier soil and higher yields,â€ť EESI explained.

It appears that the message has resonated with local farmers, with the help of a new pollinator standard written into state law in 2017. Though the standard is voluntary, in just a few years, pollinator-friendly solar arrays have become â€śthe normâ€ť in Minnesota.

As another indicator that the solar-plus-pollinator field is rapidly becoming mainstream and scaling up, the leading Tennessee solar company Silicon Ranch now offers a proprietary â€śRegenerative Energyâ€ť package that includes pollinator-friendly plantings.

Aside from the potential benefits to small farmers, pollinator habitats can also help resolve a broader land use issue.

The National Renewable Energy Laboratory estimates that more than 2 million acres of land in the U.S. could be covered by utility-scale solar arrays by 2030, including brownfields and other types of land in addition to farmland.

Pollinator-friendly solar arrays, beyond the farm

The community impact could also motivate non-farm businesses and other stakeholders to support policies that promote pollinator-friendly solar arrays.

Industry observers are already noting that vast fields of shiny panels on barren ground are at odds with the environmental message that eco-friendly businesses aim to promote through renewable energy. The picture looks quite different when the panels are surrounded by greenery and colorful blooms.

To cite one potentially impactful example, the chicken producer Purdue Farms garnered substantial attention earlier this month for converting the turf grass under a five-acre solar array at its Maryland headquarters into a pollinator habitat. In a press release, Purdue stated that it will require similar treatment for any new solar arrays in the future.

In an interesting twist, the community choice aggregation model may also help accelerate the trend.

Community choice enables local jurisdictions in some states to lobby their local utilities for more clean power in their grid. Earlier this year the California aggregation program MCE established a pollinator-friendly ground cover requirement for solar projects in its portfolio.

In addition, the green roof movement also appears to be trending toward the solar-plus-pollinator model.

Initially, green roof design was thought to be incompatible with solar arrays. The focus was on sedum and other low lying plants. By 2016, though, stakeholders were already recognizing that pollinator-friendly plants could coexist with solar panels, and now it appears that the â€śbiosolar roofâ€ť model is taking off.

Clearly, pollinator gardens are no longer window dressing for corporate buildings. Solar arrays provide the opportunity to scale them up and achieve substantial environmental benefits, both in local communities and beyond.