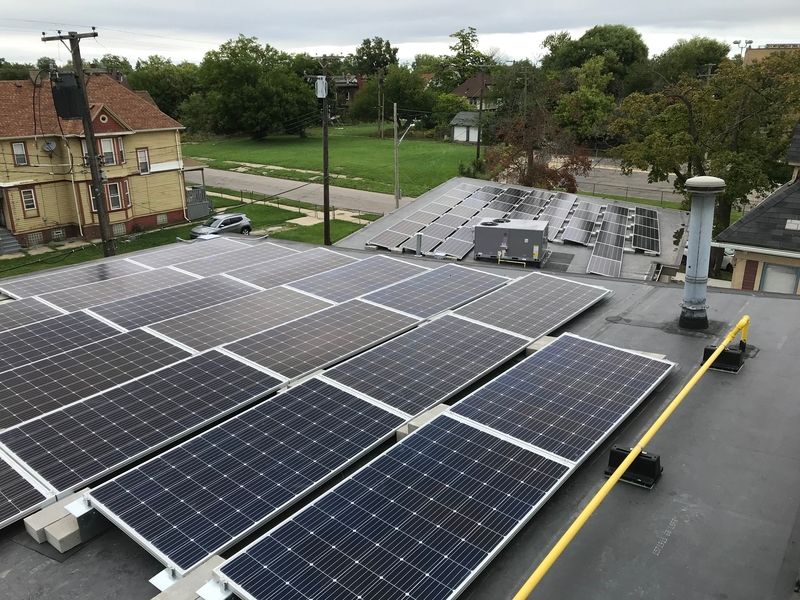 Detroit’s Pewabic Pottery, one of the oldest continuously operating pottery groups in the country, has added modern, cost-saving additions to its historic operation.

The idea is to help provide a sustainable way to ensure the pottery maker is around for another 100 years, while also reducing its carbon footprint, Executive Director Steve McBride said.

The $100,000 project, which added over six dozen solar panels to the roof of its education and tile studio addition behind its historic, Tudor-style building, had been in the works for a year and a half. But its completion on Monday comes as Pewabic is looking to save money wherever it can to offset earned revenue losses during the pandemic, McBride said.

“One of the things the pandemic has really brought home is the importance of making investments in the organization to make us sustainable for the future,” he said.

The panels will save an estimated 16 percent or $5,000 or more in energy costs the first year, McBride said, but electric costs are going up. “To invest now is going to save us more and more each year,” he said.

A National Historic Landmark, Pewabic Pottery has been making pottery and tile from its Detroit home on East Jefferson Avenue, east of the MacArthur Bridge, since 1903.

“As a historic landmark, we want to honor the integrity of the original Pewabic buildings while reducing our carbon footprint and becoming more sustainable to ensure we are still here in another 100 years.”

A $42,000 capital grant from the Michigan Council for Arts and Cultural Affairs funded just under half of the project, with the balance made up with individual donations.

The project follows the addition of a tile studio expansion last year and the education building in 2012. The recently added space has proved a boon right now, McBride said, since it enables social distancing for employees.

While its retail sales of Pewabic pieces and tiles are down about 50 percent year to date and it had to cancel fee-based group classes, the historic operation has benefited from continued demand for architectural tiles, McBride said, from projects that were in the pipeline before the pandemic and new kitchen backsplash, fireplace and other home improvement projects that have come in during the pandemic. Earned revenue accounts for about three-quarters of its budget, which was $4 million at the beginning of the year but now is $3 million.

Last year, Pewabic drew over 52,000 visitors, McBride said. It also sold tile through an annual garden party in the spring and a big summer sale, two in-person events that it wasn’t able to host this year, although it did host a smaller, virtual spring garden party sale.

During the first two months of the pandemic, Pewabic furloughed about 45 of its 57 employees, McBride said. It’s brought back all but 12 people so far to shape, stamp and glaze tiles for architectural orders and increasing online orders, which are double or triple what they were by this point last year.