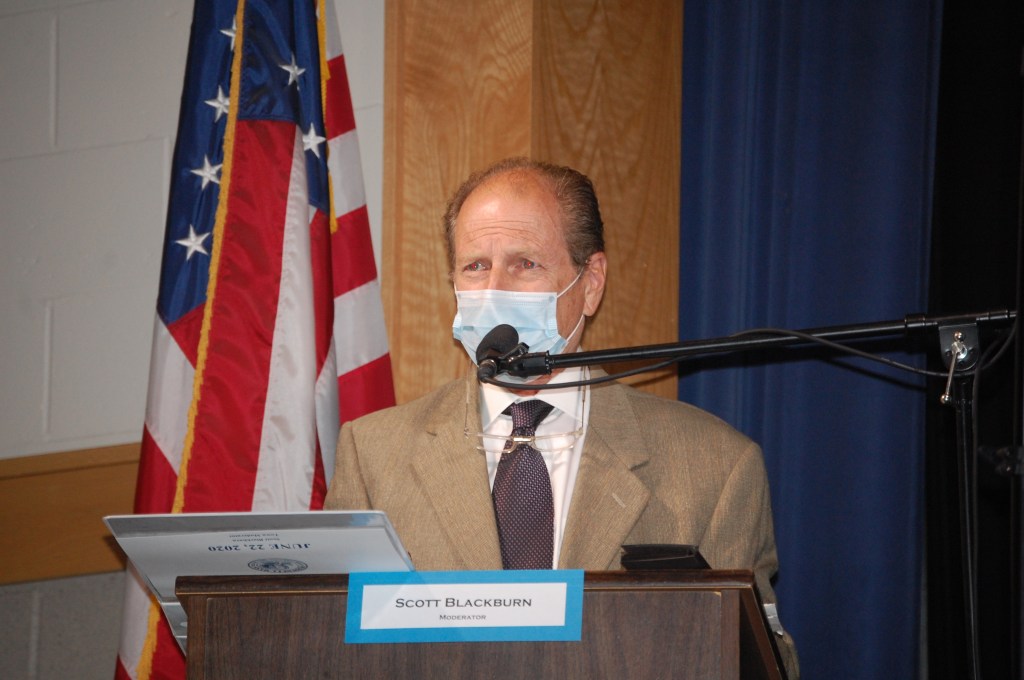 PEPPERELL – “It’s good to see everyone under these circumstances.”

Town Moderator Scott Blackburn said that in the auditorium of the Nissitissit Middle School on Monday night, his voice muffled by a face mask similar to those worn by local residents attending the annual town meeting.

Despite a limited attendance and residents wearing face masks out of precautions for coronavirus, Pepperell’s meeting went on with 10 of the 11 articles passing with voter approval.

The articles on this year’s warrant that were discussed the most involved money.

The longest discussion topic was over article 5, which asked for approval on the town’s proposed $30 million general fund budget for the 2021 fiscal year. The biggest chunk of that budget is the $19 million set aside for education, followed by $3 million for public safety, $2 million for employee benefits and insurance followed by $1.5 million for general government expenditures. The first comment on the budget came from former Board of Selectmen Chair Roland Nutter, who pointed out that the article on the warrant did not have information comparing the proposed budget to the current year’s budget and how much would change if approved.

“It’s difficult to see this and go, ‘oh this makes sense’ without looking at last year’s budget and asking why are we going so high,” Nutter added.

Town Administrator Andrew MacLean explained the 2021 budget is an increase of “a little less than six percent” from the current year’s budget, specifically citing three line items accounting for two-and-a-half percent of that increase.

The first being a debt exclusion to pay for a new ladder truck for the Fire Department, the second being a public communications center and the third being changes to the town’s retirement system payment.

The aforementioned communications center, according to MacLean, will be a regionalized center in collaboration with the Town of Ashby that would have more staff on-hand to reduce mutual aid response times along with sharing fixed costs and lowering the annual operating expense to local tax payers.

While this center will cause a $223,068 increase in annual operating costs, it will also provide a $266,514 increase in Massachusetts State 911 funding and a $42,545 decrease to taxpayers. MacLean said Townsend is committed to join the center within the year.

“The state very much wants us to regionalize,” he added. “We now have one person per shift working 24/7 and that’s not enough. This program will have two people on staff to provide increased public safety for Pepperell.”

When it came to the money for education, residents were concerned over how the North Middlesex Regional School District and the Nashoba Valley Technical High School would be welcoming students back to class this fall post-coronavirus.

North Middlesex Superintendent Brad Morgan said that he was expecting some kind of direction from state officials on June 15, but it has yet to come.

“There are a lot of unknowns in the budget due to uncertainly of how we will return,” Morgan added. “We do have large task force made up of six smaller focus groups. Everything we’re hearing right now is some kind of hybrid model with kids coming in for part of the day. We’ve heard 10 feet apart or six feet apart. The intent is to get as many kids back as we can.”

As for the money, District Business Manager Nancy Haines noted multiple drivers for the requested budget. These ranged from contract increases with level services to special education services to health insurances.

Morgan also noted the district will be spending about $150,000 to provide personal protective equipment to school staff. He added that, if the district is forced to do more remote learning in the 2020-2021 school year, more money might be spent to ensure students have access to Chromebook computers.

Another major article approved at the meeting was a pilot agreement between the Board of Selectmen and Solect Energy Development, LLC so that the school district can contract with the Massachusetts-based Solartec company to develop solar panels on the roof of the Varnum Brook Elementary School. According to MacLean, this would be a 20-year agreement leading to the school saving about $10,000 in energy costs.

“The state wants this agreement to be taxed,” he added. “The solar panels would not be owned paid for, installed or maintained by the school. The private company will be paying for everything.”

The 11th article, which was a citizen petition to adopt a non-binding resolution to “restore and maintain partisan free local municipal elections,” was moved to a later town meeting by its petitioner, Board of Selectmen candidate Anthony Beattie.

“Because we’re limited in our audience today, it would be important for more people to participate in this,” he said in his explanation.