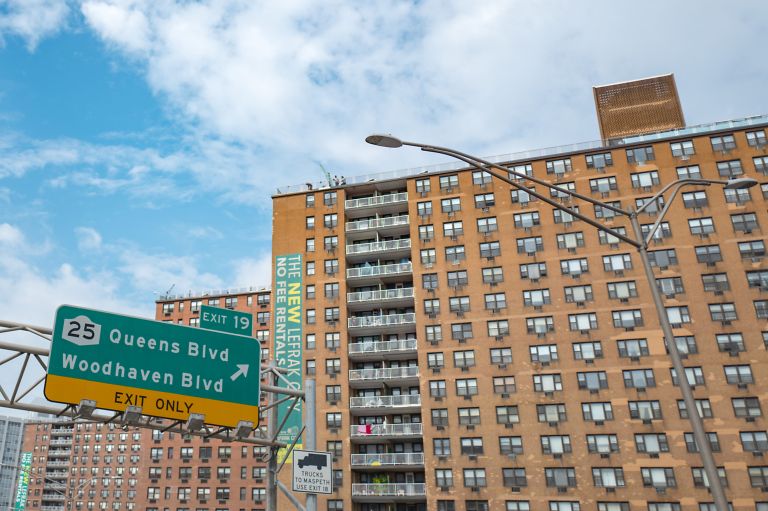 LeFrak City, that sprawling example of workforce high-rise housing in the Corona section of Queens, is to become the scene of an experiment to convert the electric car from curiosity to as common as your basic gas-powered Chevy.

The 4,605-unit, 20-building complex off the Long Island Expressway is to house one of the the largest, single electric vehicle-charging installations in New York state and the entire Northeast starting before the end of the year. Blueprint Power, a Manhattan-based technology firm which tries to help landlords decarbonize their properties through data and computer analysis, today announced a $3 million state award from the New York State Energy Research and Development Authority (NYSERDA) and its high-performing grid program.

Once complete, there will be more than 150 charging stations at the LeFrak City site that government and commercial users, as well as residents, can use. The first 20 stations should be up and running by the end of 2021, with the rest by 2024 or 2025, according to Blueprint.

The planned LeFrak City installation is to be a “demonstration project” whose goal is to spread the utilization of progressive, renewable energy resources, said Robyn Beavers, co-founder and CEO of Blueprint Power. Such things might include “solar panels on a roof, batteries that are installed at buildings, EV chargers” or systems that moderate a building’s use of power, she said, which are together referred to as “distributed energy resources.”

“They provide on-site clean energy, so it’s real decarbonization for the buildings themselves,” Beavers said.

NYSERDA is the one charged with helping New Yorkers increase their energy efficiency, use renewable energy sources, and reduce their reliance on fossil fuels. It aims to put together partnerships designed to implement innovative energy solutions. Also, Gov. Andrew Cuomo has a range of initiatives aimed at having more than 10,000 charging stations across the state by the end of 2021.

For an EV charging station to be efficient, it has to provide much more intense energy than one gets out of the typical plug you run your TV or computer on. This adds costs, and Blueprint aims to reduce those costs by using machine learning and automation to reduce the cost of supplying current to a charger.

The chargers are not likely to reduce the immediate cost of charging up an EV, but could help the driver down the road. That would be through making the cost of building a charging station less expensive and maximizing the draw of energy from less expensive energy resources, Beavers said, so the savings are likely to be shared with the driver.

If electricity costs 13 cents per kilowatt hour, it would cost about $9 to charge a fully depleted EV to a 200-mile driving range, the U.S. Department of Energy said in March.

“What we will showcase is how distributed energy resources and Blueprint’s software management platform can increase the number of EV chargers, help the grid be cleaner, and showcase the future of real estate and energy infrastructure working together,” she said. As efficiency improves, more chargers can be added.

The installation should raise the value proposition offered to LeFrak City tenants, Jamie LeFrak, vice chairman of the LeFrak Organization, said in a prepared statement. The initiative “will not only enhance our offerings to residents,” he said, “but also make a significant impact on creating a cleaner economy for our city.”

Update: This article was corrected to reflect that the installation will be one of the largest in New York state and the wider Northeast.