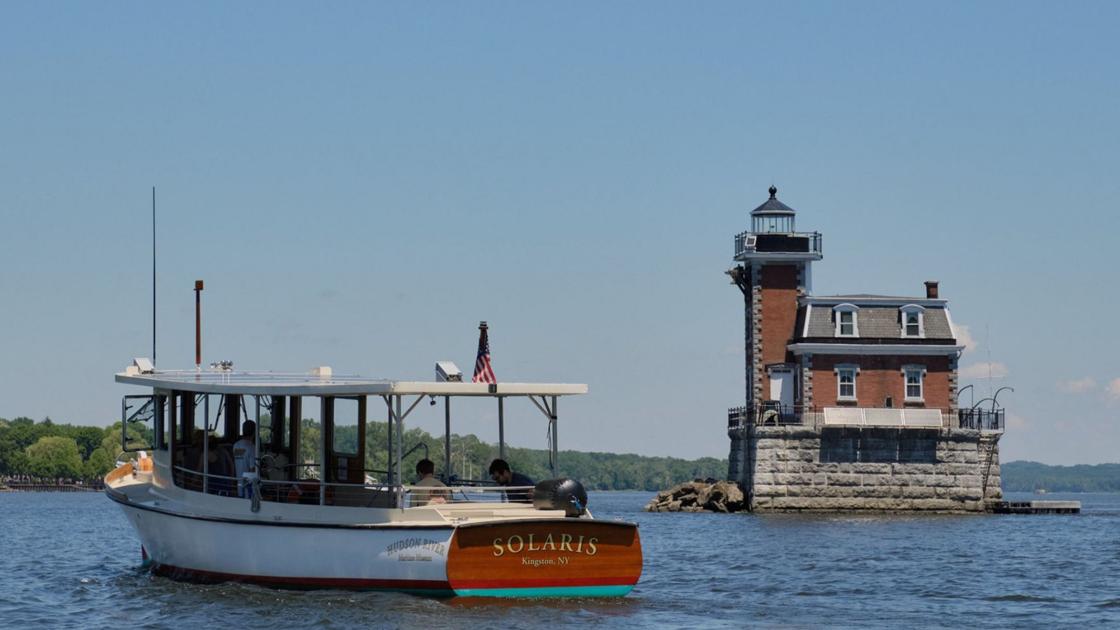 ATHENS â€” Two eco-friendly vessels will be docking overnight in Athens on Wednesday as they make their way south on the Hudson River on an educational voyage from Albany to Kingston.

The Solaris and the Apollonia started their downriver sail June 20 as part of the Hudson River Maritime Museumâ€™s RiverWise initiative. The trip concludes June 26.

The Solaris is the only 100% solar-powered, U.S. Coast Guard-certified passenger vessel in the United States. The Apollonia is the Hudson Valleyâ€™s largest carbon-neutral merchant vessel, powered by wind and vegetable oil.

â€śIntroducing the general public to the realities of sailing on the Hudson River, its historic sites and landmarks, and the fascinating stories of people past and present, RiverWise seeks to help everyone better understand the river that defines our valley,â€ť according to a statement from the museum.

The museum is also producing several documentary film series, including one about the lighthouses in the Hudson River.

The Hudson-Athens Lighthouse was named on the Preservation League of New York Stateâ€™s Seven to Save list earlier this year, a list which has been released on a biennial basis since 1999 and can reduce a siteâ€™s risk through press conferences, tours, grants and new legislation.

Built in 1874, the Hudson-Athens Lighthouse is one of the original 14 Hudson River lighthouses, of which seven remain. The lighthouse is threatened by deterioration, a lack of public awareness and a loss of visual and architectural integrity, according to a report by the league.

The Hudson-Athens Lighthouse published photos of the Solaris and the Apollonia passing by on Sunday.

â€śYesterday we had the pleasure to watch the Hudson River Maritime Museumâ€™s solar-powered boat Solaris pass by on a journey north alongside the schooner Apollonia,â€ť according to the post on Monday. â€śBoth vessels are participating in a voyage of education and advocacy concerning the maritime heritage of the upper Hudson Valley – and each vessel is carbon neutral! We were of course delighted to show off our solar panels as well which are the sole source of power for all operations on the Lighthouse.â€ť

The solar panels were installed after an interruption to the power supply in September, Hudson-Athens Lighthouse Preservation Society President Carol Gans said.

â€śWe lost power in September,â€ť Gans said, adding that the lighthouse is historically lighted for the holiday season. â€śIn order to have lighting, we had to have emergency solar installed which took almost 800 hours of volunteer time to have minimal lighting.â€ť

Community members may come and view the boats Wednesday evening, beginning at about 5 p.m.

Because of the ongoing COVID-19 pandemic, visitors will not be permitted to board the boats, but they can view the vessels from the shore and must abide by public health guidelines such as staying six feet away from those not in your party or wearing a mask if maintaining six feet is not possible.

â€śWe are delighted that Athens was included by the Hudson River Maritime Museum in its journey to increase awareness of the Hudson River,â€ť Athens Village Trustee Joshua Lipsman said. â€śWe invite people to come see the ships Wednesday evening and enjoy a waterfront stroll or picnic in Riverfront Park, or a socially distanced meal at one of Athensâ€™ delicious restaurants.â€ť

The village of Athens formed a Conservation Advisory Council earlier this month. It is one of the final steps the village needs to take to be considered for eligibility as a Climate Smart Community.

â€śThe Conservation Advisory Council can be and will be designated as a Climate Smart Committee Task Force,â€ť Lipsman said.

The committee will consist of six residents and three village officials. The council would be the first of its kind in Greene County, according to the village board.

â€śThere are two benefits to being a Climate Smart Community,â€ť Lipsman said. â€śOne is being a climate smart community. Everybody, individually and communitywise, is encouraged to do their part to respond to global climate change.â€ť

The designation can also help a community with grant funding, he said.

â€śPre-COVID, yes, Climate Smart, got you points for grant money applications that could put you over the top in terms of competitiveness,â€ť Lipsman said, adding that there is some uncertainty about what funding opportunities will look like in the wake of the pandemic.

Across the state, there are 47 bronze certified Climate Smart Communities and four silver certified communities.

More than 300 communities including the towns of Cairo, Hunter, Jewett, Ancram, Austerlitz, Chatham, Copake, Ghent, Hillsdale, Kinderhook, New Lebanon, villages of Catskill, Kinderhook and Philmont and city of Hudson have registered for the program but have not been certified.

The Hudson River Maritime Museum is a nonprofit organization dedicated to the preservation and interpretation of the maritime history of the Hudson River, its tributaries and related industries.