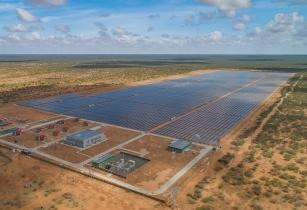 At least 75% of Kenyaâ€™s population has electricity compared to 63.8% in 2017, representing a 12% increase in the electrification rate, thanks to the governmentâ€™s aggressive rural electrification programme.

Kenya largely depends on renewable energy such as wind, geothermal and solar and hopes to achieve universal access to electricity by 2022. Renewables already make up 93% of the national grid.

A 2018 UNEP report indicated that US$1.4bn has been invested in Kenyaâ€™s energy sector; US$486mn for geothermal, US$476mn and US$467mn for wind and solar power development respectively.

Major solar energy projects have already been completed or are underway in various parts of the country.

The most outstanding project to date is the US$128.5 Garissa Solar Plant in Kenya, which is the largest grid-connected solar power plant in East and Central Africa. Kenyaâ€™s Rural Electrification Authority (REA), a government agency, which recently changed its name to Rural Electrification & Renewable Energy Corporation, owns and operates the solar plant in the North East Kenya region near the Somalia border. It is located in a semi-arid part of the country that enjoys 14 hours of sunshine each day, ideally suited for power generation.

The REA, which is mandated to increase access to electricity to rural households, education institutions and trading centres and other consumers across the country, signed a 25-year power purchase agreement (PPA) with Kenya Power (KPLC), for integration into the grid.

Under the contract, KPLC will purchase a kWh of electricity at US$0.12, which is currently US$0.07 less than electricity generated from diesel, the main source of power in Garissa County.

The Garissa power plant, which was funded by the Exim Bank of China, consists of 200,200 solar panels connected to inverters and installed on an area of 85 ha. It is estimated that it provides power to more than 625,000 homes.

Read more in the latest issue of African Review!