McDonald‚Äôs has completed construction of a first-of-its-kind restaurant designed to generate all its own power from renewable energy. The restaurant is located in Disney World Resort, which opened its gates on July 11, even as the COVID-19 pandemic continued its rampage through Florida.

According to the company, the global flagship restaurant will serve as a learning hub for McDonald‚Äôs to test solutions for reducing energy and water use across its brand, with the stated goal of eventually converting multiple other locations to renewable energy on-site to cover 100% of their energy needs on a net annual basis.

The newly remodeled building is located on the west side of Disney‚Äôs property on Buena Vista Drive near the All-Star Resorts (which remains temporarily closed). For an initial ‚Äúsoft-launch‚ÄĚ period, the restaurant is open only for drive thru and delivery service.

Touting its ‚Äúnet zero energy status,‚ÄĚ McDonald‚Äôs announced that it will pursue the International Living Future Institute‚Äôs Zero Energy Certification over the next year. Data and learnings from the restaurant will also reportedly inform McDonald‚Äôs global sustainability efforts, including progressing toward the company‚Äôs science-based target, announced in 2018,¬†to reduce greenhouse gas emissions by 36% in restaurants and offices by 2030 compared to a 2015 base year.

‚ÄúThese unprecedented times have only heightened the importance of innovation that fosters long-term security and sustainability,‚ÄĚ said Marion Gross, McDonald‚Äôs chief supply chain officer in North America, in a press statement, calling the eco-friendly building ‚Äúan important step in McDonald‚Äôs journey to reduce our carbon footprint and identify meaningful solutions in the fight against climate change.‚ÄĚ 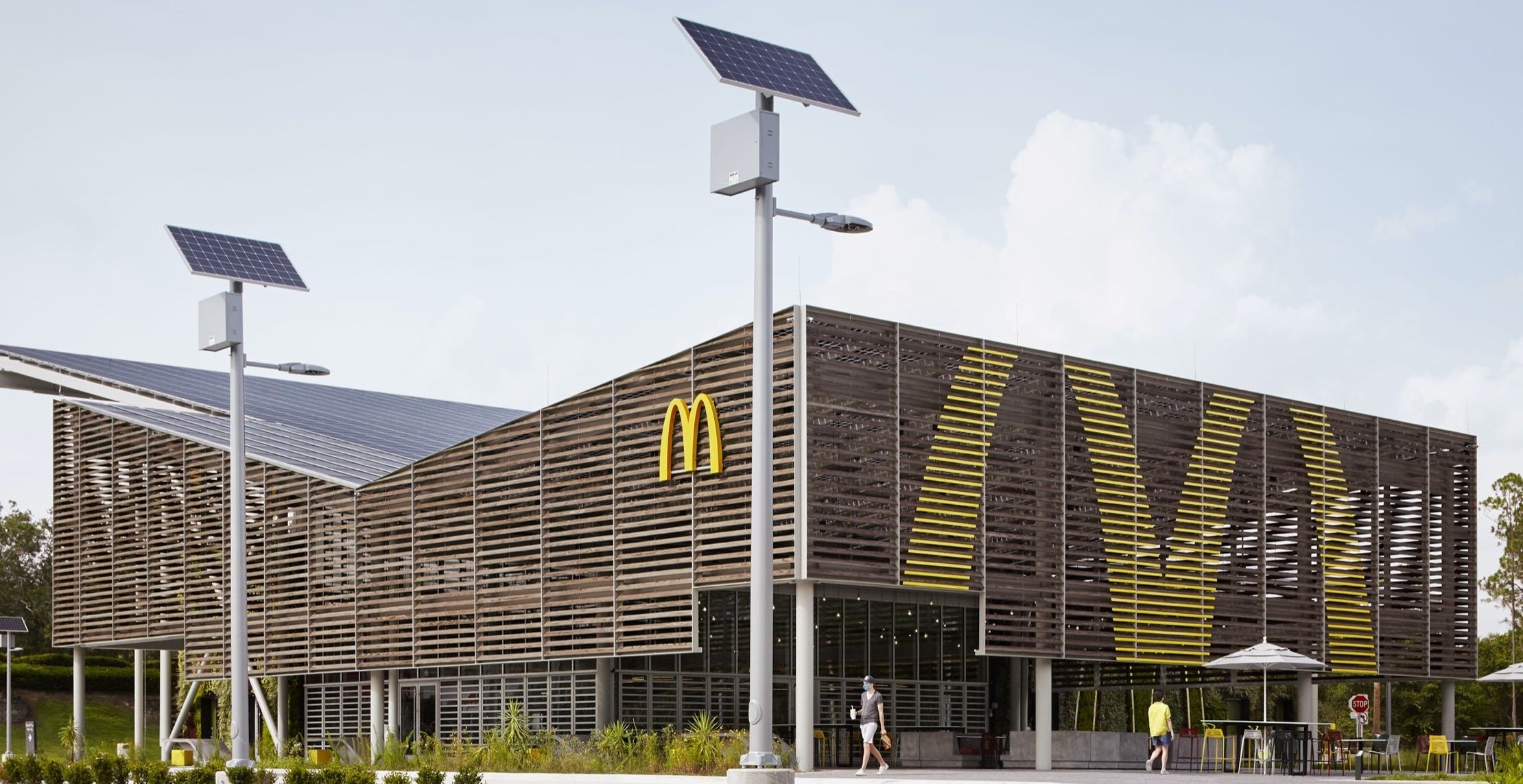 McDonald‚Äôs, which operates in 120 countries with more than 38,695 locations as of the end of last year, has been widely lauded as the first major restaurant brand to address global climate change by setting a target to reduce greenhouse gas emissions. But critics question how meaningful the emissions cuts will be in the big scheme of things given the company‚Äôs continued reliance on animal agriculture and factory farming.

According to the Food and Agriculture Organization of the United Nations, beef cattle production contributes around 15 percent of global greenhouse gas emissions. And McDonald‚Äôs ranks as one of the world‚Äôs largest buyers of beef, purchasing upwards of 1.7 billion pounds per year. This creates an enormous carbon footprint (to say nothing of the dire consequences as they relate to other types of environmental impact, human health, and animal welfare).

According to a recently-published study by NASA‚Äôs Carbon Monitoring System research initiative, methane emissions from livestock appear to be significantly higher than previous estimates. Conservative estimates suggest that McDonald‚Äôs may be responsible for almost 25 million metric tons of greenhouse gas emissions per year, which is said to be equivalent to the average emissions produced by 5 million motor vehicles.

The good news is that major breakthroughs in plant-based food science are driving a global market for meat substitutes, including vegan burgers that are virtually identical to beef burgers in terms of taste, appearance and texture, that Euromonitor International estimates will reach $23 billion by 2023. Barclays estimates that the sector will reach $140 billion over the next decade, capturing more than 10% of the global meat industry.

McDonald‚Äôs finally jumped on the vegan bandwagon last fall with the launch a new plant-based burger in partnership with Beyond Meat at 52 locations in Canada. However, the burger, called the P.L.T. or ‚ÄúPlant. Lettuce. Tomato.,‚ÄĚ was unceremoniously pulled from Canadian menus last month.

According to reports, McDonald‚Äôs has no plans to bring it back in the near future in Canada. And unlike several leading rivals, including Burger King, which last year launched the ‚ÄúImpossible Whopper‚ÄĚ as a plant-based alternative to its traditional burger at all 7,300 Burger King locations in the United States, McDonald‚Äôs has yet to test a vegan burger in the United States.

A net zero energy-designed restaurant may generate positive PR buzz and even impress green-leaning consumers and shareholders with limited understanding of the big picture. To be sure, energy and water reduction in restaurants and offices is a positive development, and should not be discounted. But until McDonald‚Äôs makes major changes to its food supply chain ‚ÄĒ and, importantly, to its beef burger-centric menu (even as Americans on the whole are lowering their meat consumption) ‚ÄĒ critics may be justified in questioning the company‚Äôs true commitment to reducing its massive carbon footprint.