A $4.5 million solar energy project at the Vineyard Transit Authority officially went online Friday, with a ribbon-cutting to celebrate the latest milestone in the VTA’s four-year journey toward an all-electric fleet. 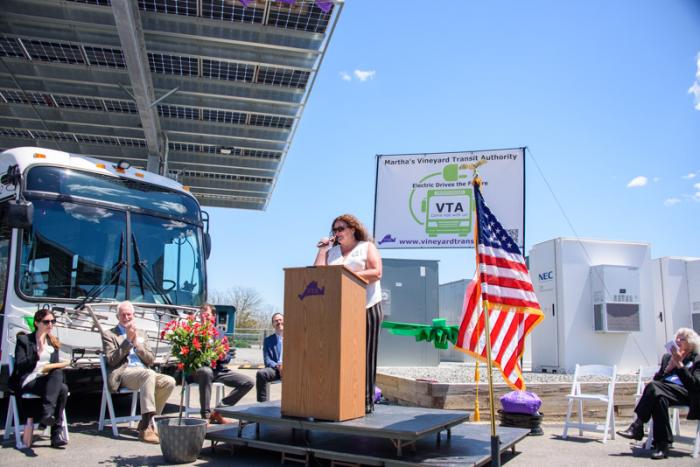 Among a series of speakers at the festive event, veteran VTA driver Andre Bonnell had the crowd laughing as he described the agency’s conversion from diesel to electric as going from the “Fred Flintstone-vintage to the George Jetson” era of transit.

The VTA now has 12 all-electric buses operating on Island and another four are scheduled for delivery in June, according to agency spokesman Colin Ouderkirk.

The project unveiled Friday at the agency’s A street, Edgartown facility adds solar canopy charging and an energy storage system, which officials hailed as a game-changer for the VTA.

“We have now created a first-of-its-kind fully integrated, clean, resilient, and flexible public transportation system, which will drastically reduce emissions on the Island (and) save the VTA thousands of dollars in operational, maintenance, and fueling costs,” said Alice Butler of Oak Bluffs, chairman of the VTA advisory board, in welcoming remarks.

The storage system will have the added benefit of providing emergency power during natural disasters, Ms. Butler continued.

Half the funding for the project came from a public-private partnership between the VTA and energy management specialist Enel X, and the other half from the Federal Transit Administration, the Massachusetts Department of Transportation (Mass DOT) and the Massachusetts Clean Energy Center, Mr. Ouderkirk told the Gazette.

Enel X North America executive Jim Pietras said at Friday’s event that in partnership with his company, the VTA will sell energy back to the power grid generating an estimated $1 million over the life of the project.

“An all-electric fleet of buses, vans, and service vehicles will ensure greater service reliability, lower maintenance and fuel costs, and create greater resilience when the power goes out. And we will be powering the buses from locally generated solar energy,” Ms. Gompert told the crowd. 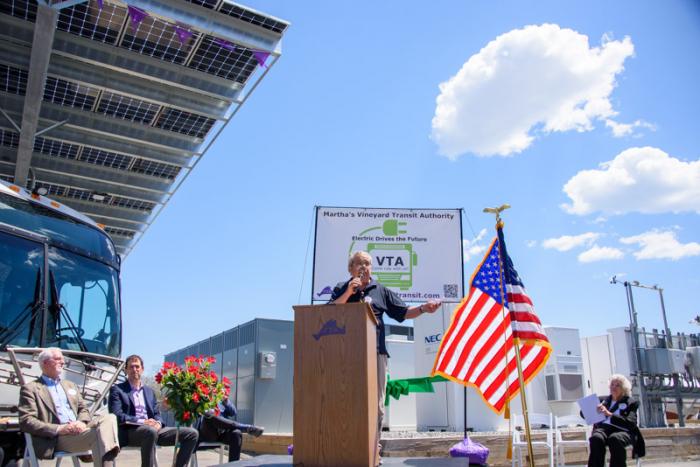 Martha’s Vineyard Commission senior planner Bill Veno also spoke Friday, reminding listeners of the importance of transit on the Island and the growing demand for service.

In the decade from 2007-2017, VTA ridership increased by 55 per cent, including an increase in year-round travel as well as use by visitors, Mr. Veno said. “It is very important to honor the VTA for its determination to do the best it can to provide transit options for people who need it.”

“Martha’s Vineyard Transit Authority is a model for its peers,” said Meredith Slesinger, rail and transit administrator for MassDOT.

Galen Nelson, of the Mass Clean Energy Center, said “This project is going to provide important lessons and data to inform other regional transit authorities electrifying their systems.”

The VTA is also developing inductive charging stations along the Island’s bus routes, with the first planned for Church street in Edgartown.

VTA administrator Angie Gompert said the current distance range for electric buses is insufficient for the Island’s needs, with larger-capacity batteries still in the development stage.

“The demand for service in the peak visitor months and in winter, with heaters going on board, requires the VTA to be able to charge buses . . . along the bus routes.”