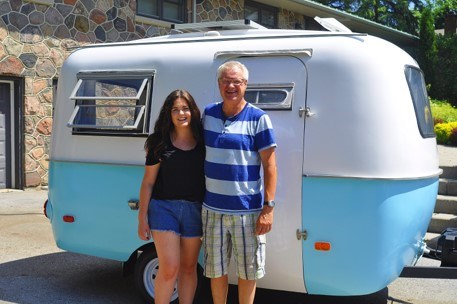 ‚ÄúIf you had told me I would be renovating a 1972 vintage Boler, I probably would have laughed,‚ÄĚ says 26-year-old Bradford resident Emily Hunter.

The rare light-weight fibreglass trailer was invented by Ray Olecko in 1968 and manufactured in Winnipeg, Manitoba. Only 10,000 units were sold until its discontinuation in 1988.

Now, only approximately 6,000 are left in Canada. One of them is in Bradford where this famous ‚Äúegg on wheels‚ÄĚ was originally purchased by Emily‚Äôs grandfather, Jim Hunter,¬†in New Brunswick in 1987.

‚ÄúMy Grandpa bought her and used her three¬†times,‚ÄĚ said Emily. ‚ÄúThe first owner only used her for two trips, so she‚Äôs still just a baby even though she is 48 years old.‚ÄĚ

Unfortunately, the Boler was not well liked by Emily‚Äôs Grandma, and ‚ÄúB‚ÄĚ was left to sit in a forest on the east coast property for several decades where the grandkids used it as a playhouse growing up.

It wasn‚Äôt until over a year ago, Emily decided to renovate the unused Boler and transform it into¬†a pop-up market for her business ‚Äď onefive1 ‚Äď selling homemade candles, wax melts, room sprays, and scrunchies.

‚ÄúI wanted a trailer to show off my product, but also still wanted to be able to camp in it,‚ÄĚ she explains.

But the Boler makeover was a bigger project than Emily had intended.

‚ÄúThe whole thing had to be gutted,‚ÄĚ noted¬†Emily. ‚ÄúThe entire frame had to be replaced because it had rotted out.‚ÄĚ

Emily‚Äôs father, Stewart Hunter,¬†and Grandpa Jim helped tackle the challenging job to not only aid in Emily‚Äôs vision, but more importantly to ensure the Boler was fit enough to withstand travel.

‚ÄúIt was pretty scary because it hadn‚Äôt moved in 20 years,‚ÄĚ said Emily, adding the Boler had to be transported to Ontario where she resided.

‚ÄúWe had to take it to a garage to get it welded and bolt the frame together,‚ÄĚ recalls Emily. ‚ÄúIt took so much gas to pull her across the province.‚ÄĚ

Once the Boler arrived safely in Ontario, Emily and her father got to work on the renovations, modifying and updating shelves and electrical wiring but keeping the structural layout intact.

‚ÄúThe flooring had holes in it and mice ate through the wiring,‚ÄĚ admits Emily. ‚ÄúCosmetic and electrical-wise, we upgraded it and updated the colours to be more modern looking.‚ÄĚ

Stewart adds that they are also installing solar panels to the roof of the Boler and are working on adding a sink with running water.

‚ÄúWe won‚Äôt be able to use it for pop-up markets until maybe late August,‚ÄĚ says Emily, referencing COVID-19 restrictions still in place at the local Bradford Farmers’ Market.

‚ÄúBut my one big goal is to move it back to New Brunswick so we can show [the changes] to my grandpa,‚ÄĚ she said.

Emily plans to surprise her grandpa with a visit and just ‚Äúshow up‚ÄĚ in the Boler sometime in the coming months. But in the meantime, she continues to learn how to drive (and back up) the trailer.

“Renovating her has been one of the most challenging and rewarding tasks I‚Äôve set my mind to,‚ÄĚ notes Emily. ‚ÄúI can‚Äôt wait to take her on trips!‚ÄĚ