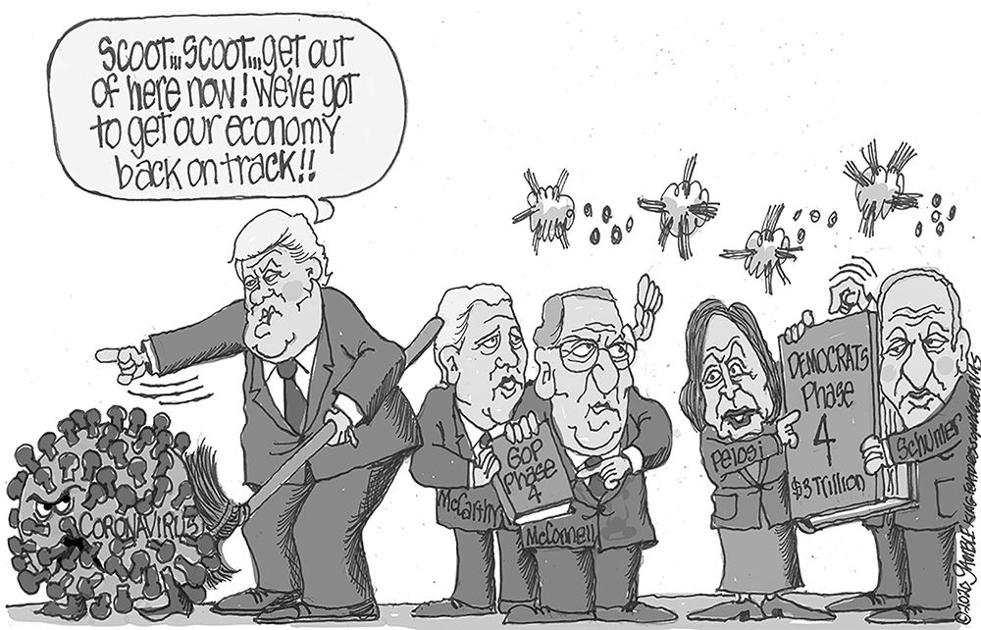 Just wondering about the Governorâ€™s looming budget cuts. Will the Coronavirus be the silver bullet that finally sends the â€śBullet Trainâ€ť to a speedy demise? The light at the end of the tunnel takes many forms.

Well we are finally going to see the real president. Ever since his inauguration the only time we were exposed to him was at one of his loud one sided political rallyâ€™s.

Since the inset of the Coronavirus he has only been conducting a podium for his picked scientist and his own televised briefings.

From these get togethers polls were conducted, and as long as he came out ahead of his opponents they were continued ad-infinitum.

All we heard was a form of his truth only. At his last speech he gave the public advice on how to treat the various. He proposed that a form of Clorox be used to cleanse the lungs and â€śyour insides.â€ť

The coup de grace was the presidentâ€™s Executive Order to put the infected meat processors back to work after it was discovered that the Coronavirus was infected in the meat companies.

Conclusion; The Administrations theory that the economy is worth more than the life of the citizens. Daily press meetings canceled.

Confined, locked up, imprisoned, quarantined, sequestered, insulated, and jailed all meanÂ  about the same thing and I am sick of it. Â

The reports on television daily report dire coved 19 conditions that will overwhelm our medical facilities and yet it hasnâ€™t happened and doesnâ€™t seems to be happening.Â  Lancaster has had about 400 cases 90% of which are recovering, and Palmdale a few more and they are mostly getting better too.

In the Antelope Valley we are far from the epicenter of this pandemic yet I see those that wonâ€™t open their front door and others going about their normal daily routines like nothing has happened.Â  What the right course of action?

Our governor has got to realize that peopleâ€™s lives and lively hoods are on the verge of being changed forever.Â  We are not meant to be caged animals.Â  Most of us can only do so much to clean the sock drawer.Â  Sports are gone, the movies are gone.Â  Even the parks and beaches are off limits.Â Â  Thereâ€™s no fun anymore.

The rich people have big mansions, private planes, and getaways. Most of us donâ€™t.

We canâ€™t even go camping by ourselves yet grocery shopping and working in the industries still open is OK. Further, some doctors familiar with infectiousÂ  illness suggest that to be cooped up much longer will put our collective immune systems at risk.Â Â Â  Â

Careful and cautious contacts with others seems to be the best preventative measures that we can take. Itâ€™s time to open things up.Â  I also wonder why Samâ€™s, Costco, and the grocery stores are OK for shopping but small business, mom and pop stores and the like are not? I donâ€™t have a problem with new health rules but to stay on lockdown is going too create more and more problems.

During the Cold War between the US and Russia, the key to an uneasy peace was to build large arsenals of nuclear weapons.Â  Neither side dared use the weapons for fear that this would ultimately lead to full scale nuclear war and the total destruction of both nations.Â  It was called â€śMutually Assured Destruction.â€ť Â

Surely no-one in their right minds would even contemplate such a tactic, right?Â  I guess I was wrong.Â  The Democrats are so single-mindedly intent on destroying President Trump that they are willing to destroy our economy in the process.Â  How else could you interpret the message from the top of the Democrat party all the way down to Democrat governors and mayors to stall the reopening process. Â

The Democrats have no problem spending trillions of dollars each month so people can sit at home and watch Netflix â€” just call it â€śUniversal Incomeâ€ť by other means.Â  So what is the plan after November when Trump leaves office and the Democrats are standing in the smoking ruins of what once was the greatest economy on the planet.Â Â  Do the Democrats think they will be able to blame Trump once he is gone from office.Â  Is the plan to bail out all â€śblueâ€ť states who have mismanaged their economies for years.

Are we in for another â€śNew Dealâ€ť only this time we will spend trillions more on solar panels and wind turbines paid for by even higher taxes.Â  Does anyone believe that the current Democrat leadership is capable of fixing what will be the nationsâ€™ worst economic disaster?Â  The voters may be fickle but they will hold the Democrats responsible for the destruction of their lives. Â