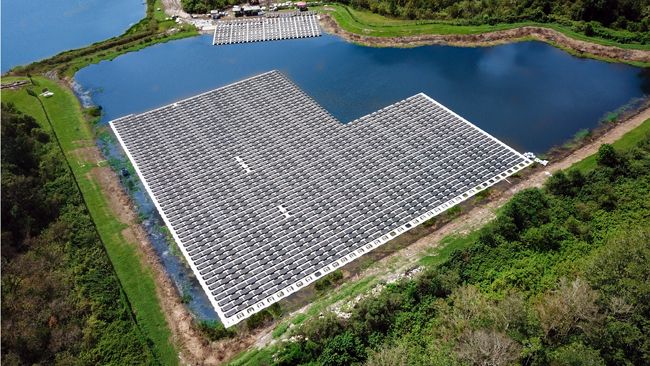 CHARLOTTE, N.C. â€“ The U.S. Armyâ€™s Fort Bragg in North Carolina will soon be home to the largest floating solar plant in the Southeast â€“ a 1.1-megawatt (MW) system as part of a Utility Energy Service Contract (UESC) awarded to Duke Energy.

The $36 million contract will focus on energy resilience and security at Fort Bragg: infrastructure modernization including lighting and water upgrades, heating, ventilation and air-conditioning and boiler system improvements.

â€śAs a leader in solar energy, weâ€™re excited to bring this unique project to Fort Bragg,â€ť said Melisa Johns, vice president, Distributed Energy Solutions at Duke Energy. â€śThis project takes a comprehensive look at the way energy is being used at Fort Bragg and will lead to more efficient energy use and significant cost savings.â€ť

Ameresco, Duke Energyâ€™s prime contractor, will build the 1.1-MW floating solar PV system on the Big Muddy Lake located at Camp Mackall. Fort Bragg will own and operate the system once construction is completed. Construction is expected to begin in November.

â€śWe approached Duke Energy with the idea of a floating solar array unsure of how they would respond to the innovative concept,â€ť said Audrey Oxendine, Fort Bragg Energy and Utilities Branch Chief. â€śHowever, Duke Energy was excited to take on the challenge and work with us to make an idea into reality.â€ť

The floating solar installation will be paired with a 2-MW battery energy storage system. The system will supplement power to Fort Bragg from the local grid and provide backup power during electric service outages.

Floating solar power could have a big future. The U.S. Department of Energyâ€™s National Renewable Energy Laboratory (NREL) researchers estimate that installing floating solar photovoltaics on the more than 24,000 man-made U.S. reservoirs could generate about 10 percent of the nationâ€™s annual electricity production. Currently, floating solar makes up only about 1-2 percent of the worldâ€™s solar capacity.

About 90 percent of the floating solar capacity in the world is in Asia. However, the technology can take advantage of water space that would otherwise go unused â€“ like at Fort Bragg. (View and download video of a floating solar facility).

North Carolina and Duke Energy are leaders in solar energy. The state is second in the nation for overall solar power capacity. Duke Energy owns and operates 40 solar facilities in North Carolina â€“ one of which is a 13-MW facility at the Marine Corps Base Camp Lejeune in Onslow County.

Fort Bragg has the largest population of any military installation in the Department of Defense with more than 50,000 active duty personnel. Among its many important functions, the post is the home of the headquarters for both the U.S. Army Forces Command (FORSCOM) and U.S. Army Special Operations Command (USASOC). The post is also home of the Joint Special Operations Command (JSOC), the XVIII Airborne Corps, and the headquarters of U.S. Army Reserve Command, and the 82nd Airborne Division. Womack Army Medical Center is a 1.1 million square feet, 138-bed hospital located on the post serving more than 160,000 eligible beneficiaries, the largest beneficiary population in the Army. Two airfields are located within the confines of the post: Pope Army Airfield and Simmons Army Airfield.