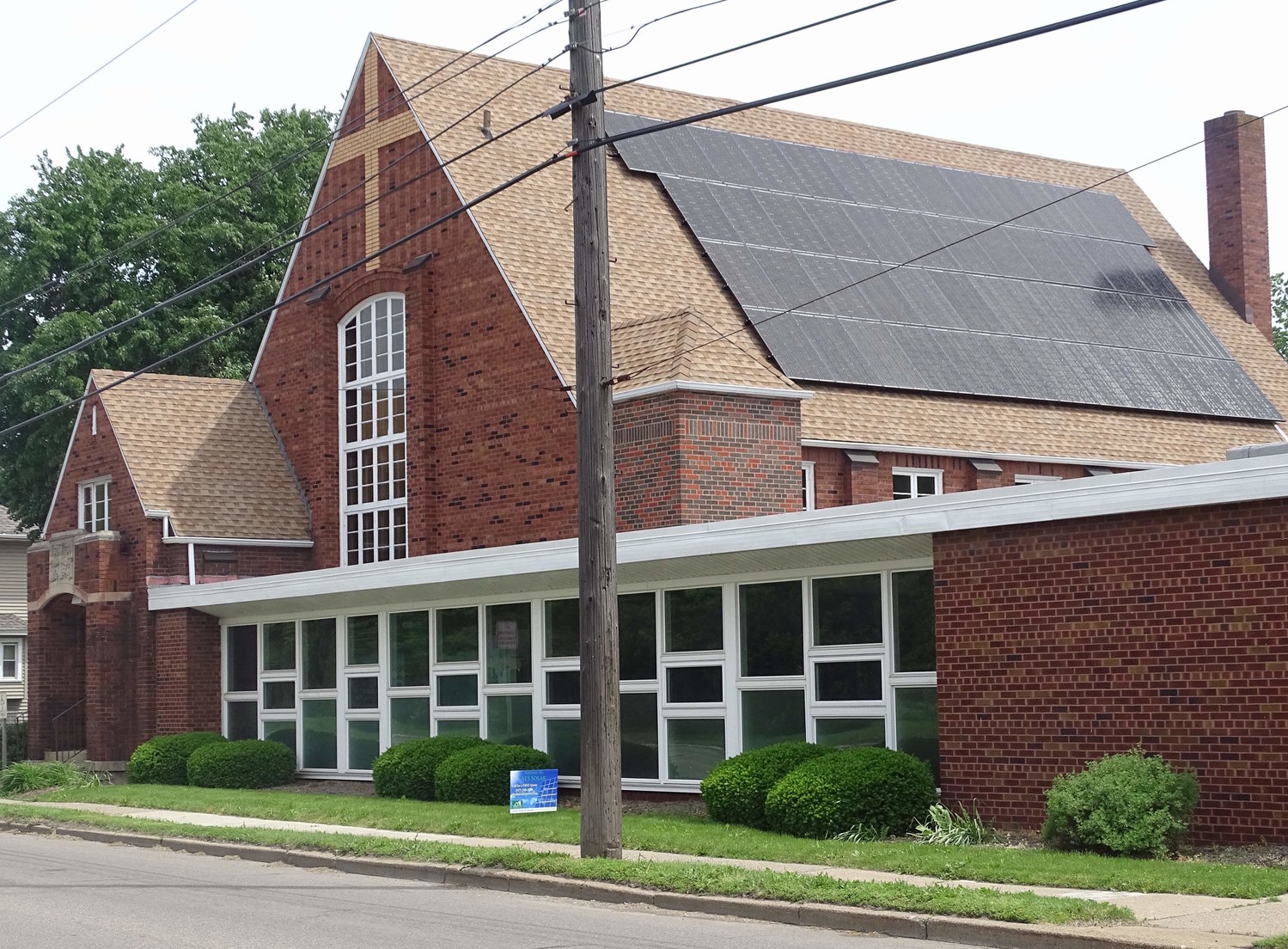 WEDNESDAY, June 3 â€” They saw the light, and the light was carbon free, and it was also cost effective. Itâ€™s not as poetic as the Book of Genesis, but for Lansingâ€™s Grace Lutheran Church, Wednesday marked a mighty beginning.

With the touch of a wireless router switch, church members watched as a monitor tracked the churchâ€™s first day of all-solar electric power generation.

A rooftop solar array, clearly visible to motorists heading past 528 N. Martin Luther King Jr. Blvd., in the Genesee Neighborhood, now takes care of all the churchâ€™s electrical needs, according to the John Schleicher, the interim pastor and a bishop emeritus of the church.

When he became interim pastor, Schleicher took one look at the churchâ€™s spacious, steep, south-facing roof and he saw the light.

â€śItâ€™s got maximum exposure to the sun and the snow will slide right off,â€ť he said. â€śItâ€™s also highly visible to traffic.â€ť Schleicher hopes the project will inspire other local churches to follow suit. He is also the chairman of Michigan Interfaith Power and Light, part of a national network promoting faith-based responses to climate change.

The small Grace Lutheran congregation of about 200 enthusiastically voted for the idea. The cost was about $37,000, with most coming from members, without dipping into church reserves.

â€śThis is a great day,â€ť congregation president Linda Flanagan said. â€śWhen Grace Lutheran learned of this project, and the impact it would have on our future, we went for it.Â  Itâ€™s exciting to see our dream come to fruition.â€ť

Church member Bruce Callen said the church has been looking for ways to reduce its carbon footprint for a long time. A grant from the Lansing Board of Water & Light helped the church outfit the house next door, which it owns, with energy efficient appliances, cutting the houseâ€™s electric bill by 30 percent. Four refugees from Central America are living in the house.

But Callen, Schleicher and other members wanted to take the churchâ€™s energy bill to zero.

As interim pastor, Schleicherâ€™s goal is to hand over a building with sustainable energy expenses to a relatively low-income community.

â€śThat way, weâ€™ll have a reasonable shot at being here for the next 30 years,â€ť he said.

Grace Lutheran expects to recoup its investment in the 15.19kW solar array in 10 years or so, and enjoy unlimited benefice from the heavens thereafter.

Absolute Environmental Solutions, a company started by recent MSU College of Law grads Robert Kaercher and Dan Bacon, came in with the lowest and most comprehensive of three good bids, Schleicher said.

â€śThey really wanted to do this for us, and use it as an example for other churches,â€ť he said.

Schleicher said the panels would have cost 50 percent more only five to 10 years ago.

If the panels put out extra energy, the BWL will credit the church with the full value of the energy, via net metering.

The church also plans to reap a $2,000 solar rebate from the BWL.

After taking a look at the control boxes on the side of the building, Kaercher and Bacon took the group back inside the church for the big moment.

Distancing from each other as much as possible, yet leaning forward in anticipation, the members gathered in Schleicherâ€™s office for first glimpse of the monitor display. Shortly before noon, the router was turned on and Bacon logged onto the computer.

A colorful box appeared, indicating that the churchâ€™s panels had already put out 16.35 kilowatt hours for the day.

How cutting edge is Grace Lutheranâ€™s solar system? Never mind the low cost and the high output. The monitor gods seemed to know that mere numbers make most people glaze over.

Bacon clicked a button on the display and announced to the group that the energy the churchâ€™s panels put out the day before could have powered all the lights on the Eiffel Tower for 24 minutes.

A colorful graph spiked up and down as clouds drifted in the heavens and solar energy fluctuated.

A member poked her head forward and asked Kaercher what happens to the monitor at night.