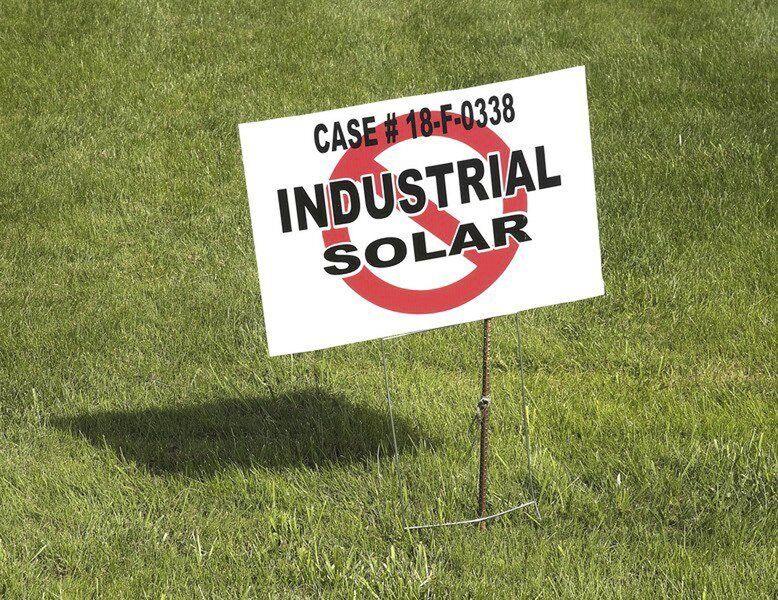 Solar energy production is knocking on our door in Niagara County, and it has sparked a debate about how much of it we want and under what terms. In Cambria and Hartland and beyond, local residents have packed community meetings to understand the large solar projects being proposed here. Many have voiced their objections. Neighbors have dotted the land with signs on both sides. Some have raised concerns as well about a solar project here in Lockport. Last month the County Legislature made it more difficult for companies to get the special property tax exemption used to lure such projects here. From safety issues to the impact on property values, people have questions about what it means to have solar fields as neighbors.

I am generally a fan of solar energy. Last year I had 14 solar panels installed on the roof of my house. Now every time I head down to the basement to do a load of laundry, 100% of that electricity comes from the sunshine falling from the sky. My monthly NYSEG bill for electricity is $16.50 year-round, rain or shine (the minimum hook-up fee). More importantly, as the father of a teenager and as the grandfather of two little girls, I am deeply aware how climate change threatens their futures. I understand the urgency of shifting as quickly as we can away from the fossil fuels that are making the world a much more dangerous place.

The decisions about solar power that we make today will affect our communities in a big way for decades to come. We need to be well-informed and we need all perspectives to be heard. Over the past year Iâ€™ve spent time digging into the issue, going to meetings, speaking with people with different views, and putting questions to some of the companies involved in these projects. This series of three articles, beginning today, is aimed at deepening our understanding about the solar future being proposed here and what it would mean, for all of us.

The first thing to know is that not all solar projects are the same. Like pizza, they come in different sizes and flavors. Some are small home systems like mine, and so far I havenâ€™t heard any particular community objections to those. Then there are the other solar projects that range in size from modest to mammoth. Here is a sampling.

One is the solar field being proposed on two large plots of agricultural land on Summit Street in the city of Lockport. Last month, on a split vote, the Common Council approved the permit to move the project forward. It would erect 24,000 solar panels across 47 acres. The land would be leased by a Canadian company, which would build and operate the field for 25 years. The project reportedly would generate enough electricity to power about 1,450 homes. It is also classified as a â€ścommunity solarâ€ť project, which means two things â€” that it is small scale and will sell its electricity to local households at a price about 10% less than what NYSEG charges.

At the other end of the spectrum are two giant industrial-scale solar projects being proposed. The Bear Ridge Solar project in Cambria-Pendleton would be sited on 900 acres of agricultural land and generate enough electricity to fuel as many as 20,000 homes. Ridge View Solar Center in Hartland and Newfane would be sited on 2,000 acres, spread across more than 40 different farms. It would generate enough electricity to powerÂ about 75,000 homes. Other companies have recently approached the Town of Lockport about solar projects on agricultural and vacant land there.

There are reasons behind this push for large scale solar projects here. First, they are very profitable, in part because of state and federal tax subsidies. The corporations behind these projects are big. The company behind Ridge View has operations in 22 countries. Solar companies want to come here, to Niagara County, because we have the three things they need: open land, landowners interested in leasing it to them, and proximity to some of New Yorkâ€™s largest power cables (because of the now-closed Somerset Generation Station and the Niagara Falls hydropower project).

It is precisely because we are such a ripe target for solar developers that we need to move beyond just the happy promises offered by them, as well as the dire warnings offered by solar opponents. What we need are solid facts and hard analysis. We need to get real answers to real questions.

What does it mean to have solar power fields in our communities?

Are there safety issues that warrant concern or are these overblown?

What rights do people have to do what they want with the land they own?

What rights do communities have to tell them â€śnoâ€ť?

What opportunities are created by having solar projects here, and how could this affect the nature of our communities going forward?

How can we evaluate projects like these to tell the good from the bad?

If we do become a major producer of solar energy, how can we shape it so that it works for us and not against us?

To get answers to these questions, I talked with more than a dozen people who have an interest in the latest solar proposals, and did extensive research on the topics. Stay tuned over the next two days to find out what I learned.

Jim Shultz is a regularly contributing essayist inÂ the Lockport Union-Sun & Journal. He’s alsoÂ the founder and executive director of the Democracy Center. Contact him at: JimShultz@democracyctr.org.

Solar energy production is knocking on our door in Niagara County.Â This series of three articles, beginning today, is aimed at deepening the public’sÂ understanding about the solar future being proposed here and what it could mean, for all of us.

COMING FRIDAY:Â A look at the concerns raised by solar power opponents.

COMING SATURDAY: A look at the economics, that is, “the money part” of solar deal-making.