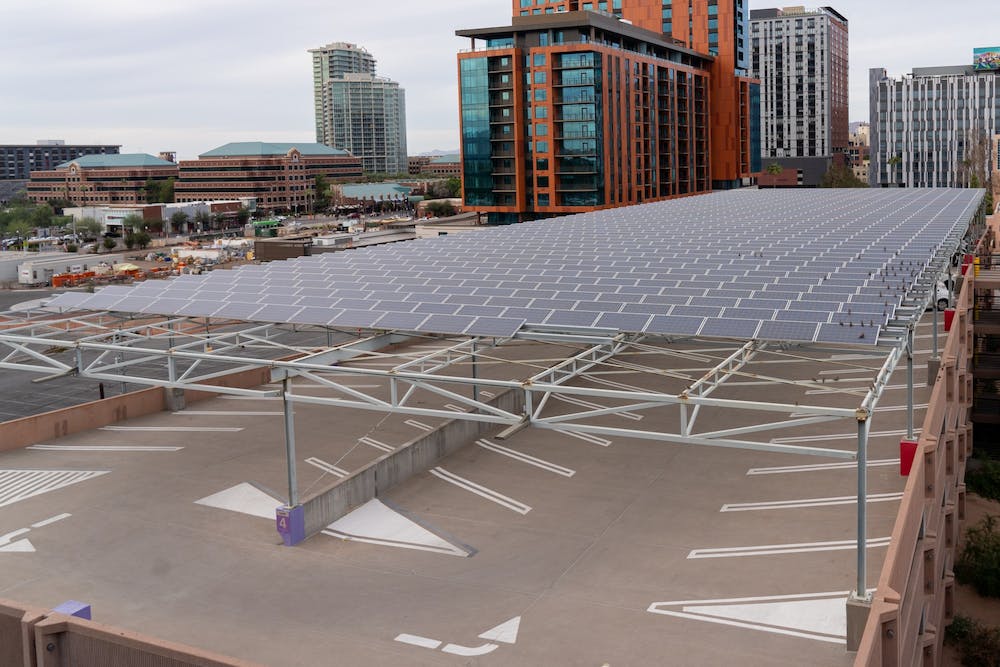 Solar panels on the 10th Street Parking Structure, in Tempe, are pictured on Saturday, Oct. 24, 2020.

The Holman Research Group at ASU has made strides in renewable energy research and development that aims to prove its commercial value.

The group comprises electrical engineers, materials scientists, mechanical engineers, physicists and chemists that aim to “define and solve engineering problems that are both interesting and important,” according to its website.

Zachary Holman, an associate professor at the School of Electrical, Computer and Energy Engineering leads the team and researches both tandem solar cells and surface coatings.Â

Solar cells, or photovoltaic cells, are the electrical devices commonly used in solar panels to convert energy from light into electricity. Tandem solar cells, according to Holman, are composed of two semi-conductors that absorb two different spectrums of light “that allows for higher energy efficiency.”

Efficiency in renewable energy is the percentage of energy that is eventually created by the process of an energy source that was not lost in the process as heat, friction or other factors that would impede its conversion into electrical energy.Â

“The best silicate solar cells are at the 25-26% efficiency range â€¦ we think that we will soon be in excess of 30%,” Holman said.

Holman has applied research in both fields to his efforts to prove the commercial value of renewable energy through two startup companies:Â SunFlex Solar and Swift Coat.

This August, SunFlex Solar was awarded the American-Made Solar Prize by the U.S. Department of Energy. Holman said U.S. solar cell manufacturing must work to catch up to manufacturing in other countries.Â

“We have been working on three main problems, higher efficiency, scaling the technology for manufacturing, and better reliability,” Holman said.

The coating was made to keep outdoor surfaces clean by absorbing UV rays and breaking down soilants.Â

Firth said that Swift Coat’s goal is to apply a half-century’s worth of research into a commercial environment.Â

“(Holman) thought that the discontinuity between research and commercial products wasnâ€™t a demand problem, itâ€™s not really a supply problem either, it was a manufacturing problem,” Firth said. “How do you take something that is the size of a speck of dust and turn it into this large scale commercial manufacturing environment?”

Shannon Poges, a chemist and senior engineer at Swift Coat, has been working with the company since 2019.

â€śThis process is intended to keep surfaces cleaner, which would require less maintenance and better equip solar panels for different weather conditions and adapt solar panel modules to the environments they will be facingâ€ť, Poges said.

Other products, such as their anti-reflective coatings, have also helped in benefiting the development of solar cell performance according to Poges.Â

Holman is working to use his startupsâ€™ research and expertise on the advancement of the solar panel industry as a reliable and profitable renewable energy source.