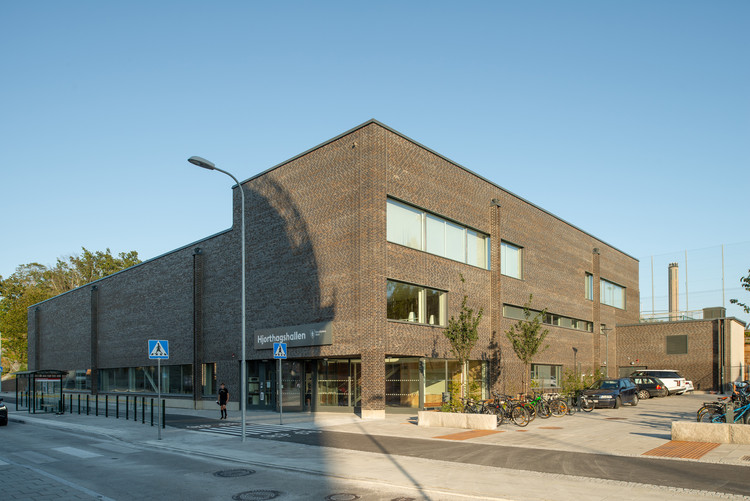 Text description provided by the architects. The Gasworks area in Hjorthagen is undergoing a transformation. On behalf of the Stockholm Sports Administration and the city of Stockholm, during the fall of 2015, AIX Arkitekter continued its proposal from 2008 to build a sports hall located between Hjorthagen’s sports field and GasverksvĂ¤gen. The completed hall is now a link between the old district of Hjorthagen, the new Royal Sea Port, and the Gasworks area.

The ground floor of the sports hall is on the same level as GasverksvĂ¤gen. Large glazings to the north and west provide contact with the street, the city room, and adjacent buildings from the sports hall. The facades in brick are a common expression with the area’s other old and new buildings. Stands for the public, cafeteria, and training rooms for many different activities help to bring the house to life.

The artwork â€śGenomsynâ€ť/â€ťSee-throughâ€ť of Anna Nordquist Andersson, formed by 3 pairs of eyes, adorns the hall’s side facade and interior. The title â€śSee-throughâ€ť can also illustrate the idea behind the architecture, which wants to be illuminated and included in the urban space. The sports hall interacts with the street, the school with its yard, and the gasholders. The urban space becomes more accessible due to the location of the building. Its second floor connects the hall with the existing sports field. Here you can find the new locals for training fencing, that before where located in the underground station, and now have generous windows.

Solar panels placed on the green roof of the hall supply the building with energy. The proximity to the National Park does, that the sports hall has been designed to support local wildlife. Climbing plants have been planted to cover the facades, batâ€™s and bird’s wood nests hung in the walls and tree trunks are also installed on the roof, to give shelter and help beetles and other insects to cross from one side of the National Park to the other. The hall has been certified as an environmental building, grade gold, by the Swedish Green Building organization.