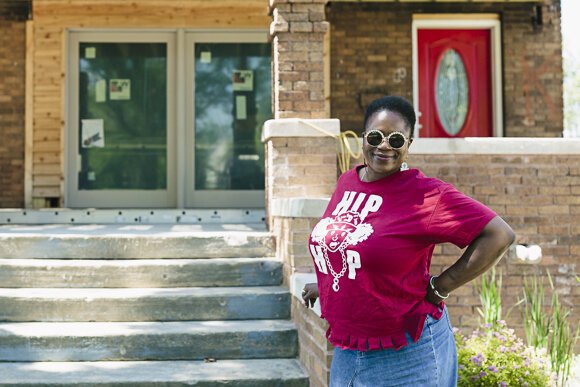 It was in 2011 when Highland Park had its streetlights repossessed by DTE Energy, allowing the city to avoid paying $4 million in unpaid debts.

Now Avalon Village, an eco-village within the city, is taking matters into its own hands.

Avalon Village along with partners Soulardarity and the Michigan Economic Development Corporation have launched a crowdfunding campaign to install five solar-powered streetlights along Avalon Street in Highland Park.

As part of the initiative, Avalon Village has until Tuesday, Nov. 10, to raise $37,500 through its crowdfunding campaign. If they are successful, MEDC will then contribute an additional $37,500 to the project.

“This matching grant means that we will have five residential solar streetlights with Wi-Fi capabilities. It means that our children will be able to keep up educationally in a safe and secure community,”Â says Shu Harris, founder of Avalon Village and also known as “Mama Shu.”

“It means showing that we can take matters into our own hands and solve our own problems â€”Â even while we’re helping our communities through this crisis.”

The smart streetlights are manufactured by the Ypsilanti-based Solartonic company.

Solartonic has committed to manufacturing the streetlights, installing the WiFi network, and providing remote and onsite maintenance.

The streetlights and Wi-Fi network will be installed by the end of this year, should the crowdfunding campaign succeed.

“Creating an environment that is welcoming to all people is key to great placemaking,”Â says Dan Gilmartin, CEO and executive director of the Michigan Municipal League.

“The We Lit Avalon! project will reach that goal with improved public safety â€”Â which is always important â€” and free internet access â€”Â which is increasingly valuable for many of the functions of daily life.”

The We Lit Avalon! crowdfunding campaign is hosted on the Michigan-based Patronicity platform, which can be viewed here.

Got a development news story to share? Email MJ GalbraithÂ hereÂ or send him a tweetÂ @mikegalbraith.